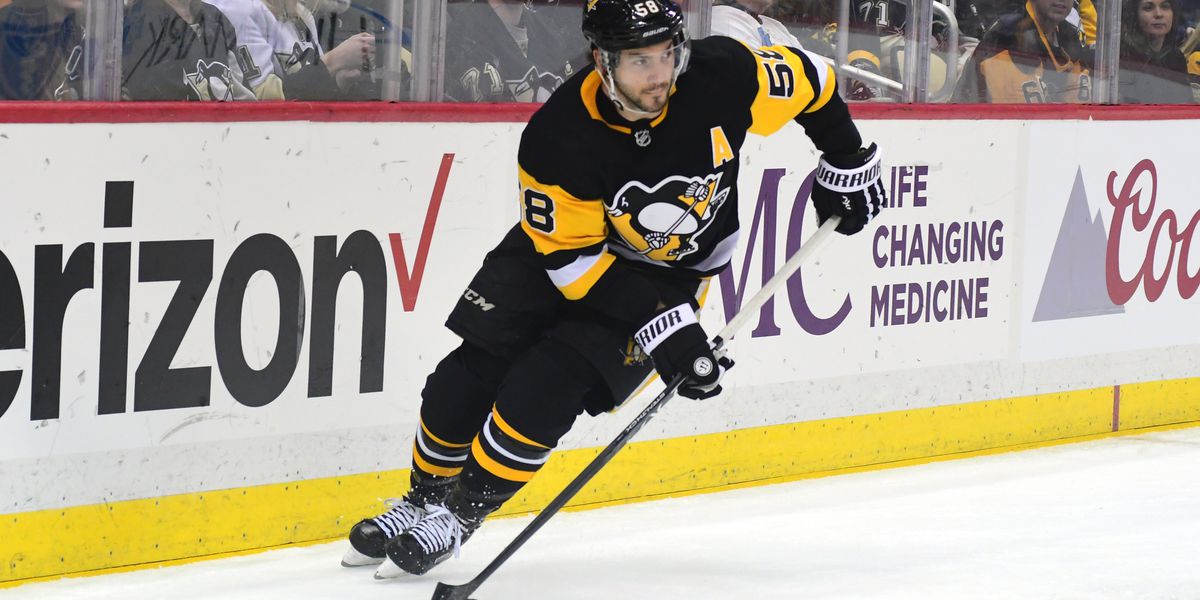 Kris Letang has had a remarkable season for the Penguins thus far and today, we are going to remark upon that.

Following Tuesday night’s win in Calgary, where Letang netted a 200′ empty net goal and pocketed an assist, he extended his points streak to 3 games (1G, 5A) and currently sits with 8G-16A-24P in 26 games played this season.

That total of 24 points finds himself 4th on the team in points recorded and 11th in the NHL among defensemen.  His 0.92 total points per game is 5th most among all defensemen as well.

But being good at hockey goes beyond the amount of points you score.

It’s long been known that Letang is the straw that stirs the drink for the Penguins.  Do they play fine without him?  Sure.  But this team over the years has also lacked some bite and gusto without him.

That, of course, goes well beyond this season.  In fact, since the start of the 2007-08 season, we’ve seen the Penguins control the share of events that take place far better with Letang on the ice compared to when he’s not (including when he is out of the lineup).

The biggest thing that should stand out here is the decrease almost entirely across the board that the Penguins see when they don’t have Letang’s services on the ice at 5-on-5.  Without Letang, the Penguins have become a very middle-of-the-road team, controlling just 50% ±1.85%.  With Letang, they see around (or greater than) a 53% share of events that take place.

As you’d expect with a sample size this large, the goals scored ends up almost identical, but the Penguins are perpetually in a better position to score goals with Letang on the ice.

This can be seen when we unwrap the shares of events to take a look at the rates of events that take place for and against the Penguin both with and without Letang.

Since the start of the 2007-08 season at 5v5, the Penguins have generated over 7 more shot attempts at the goal, more than 5 more unblocked attempts, and nearly 4 more shots on goal per 60 minutes of play with Letang on the ice compared to when he’s either off the ice or out of the lineup.

They’ve also seen nearly 2 fewer shot attempts, about 1 fewer unblocked attempt, and about the same amount of shots on goal sent their way per hour of 5v5 play.

This trend continues above with the rate of scoring chances that take place as well.  With Letang, per hour of 5v5 play, the Penguins generate over 3.5 more scoring chances and over 1 more high danger chance with Letang, while seeing similar results defensively with and without him.

In other words, the Penguins are perpetually in a better position to score goals with Letang on the ice.

And that’s just what they’ve done, generating about 0.25 more expected goals and actual goals per hour of 5v5 play with him.

Armed with this, you’d probably expect to see this take place when looking solely at this season.  If that was your expectation, you’d be right, too.

Relative to the rest of the team this season in the 26 games Letang has played, the results are staggering.

Relative to the rest of the league, this also holds true (via HockeyViz.com):

With Letang on the ice (left), the Penguins find themselves just setting up shot right down Main Street, collected unblocked shot after unblocked shot from quality areas of the ice as shown by the red above.  That means that they are generating more shots per 60 minutes of 5v5 play from those areas compared to the rest of the league, amounting to a “Threat” of +14%.

In contrast, the blue areas on the right, particularly through the middle of the ice, mean that the Penguins are generating fewer unblocked shots from those areas without Letang on the ice.  In fact, they find themselves almost exclusively relegated to the point.

Defensively, he’s been outstanding this season as well.  With 58 on the ice, the Penguins see 4.21 fewer shot attempts, 2.92 fewer unblocked attempts, 2.52 fewer shots on goal, 0.50 fewer scoring chances, 1.47 fewer high danger chances, no change in expected goals and a slight 0.58 uptick in goals against compared to when he’s off of the ice, all per 60 minutes of 5v5 play.

Again, via Hockey Viz, we can see just what the Penguins have done with Letang on the ice relative to that of the rest of the league.  Here, blue is good as it means that the Penguins give up fewer unblocked attempts from these areas of the ice.  To that end, the Pens, as we’ve seen throughout the season, are demons in their own zone.  It doesn’t change much with and without Letang in so much as it’s good regardless of who’s on the ice.  They just seem to shut down the entire slot area with regularity.

With the suppression numbers looking that good, it’s hard to find too much to complain about in Letang’s game.

And if you were sitting there thinking to yourself, “that’s awesome, but Geoff, how do the overall shares of these events look at 5v5 for Letang relative to the rest of the team,” well, dear reader, just take a look below.

Almost entirely across the whole gambit of data buckets here, the Penguins with Letang on the ice at 5v5 see at least a 7.6% increase in control of shot attempts, unblocked attempts, shots on goal, scoring chances, and high danger chances with him on the ice versus when he’s on the bench.  It drops to 4.71% and 2.01% increases in expected goals and actual goals, but those are increases nevertheless.

With as much as the Penguins suppress their opposition with Letang on the ice, you can reasonably expect that he will climb out of the basement in terms of goals against.  In fact, his on-ice save percentage of 90.23% is second worst on the team behind Brian Dumoulin’s 89.22%, signalling that, despite those two controlling and patrolling their own zone, the goalies behind them haven’t made the same saves they have for the other 4 defensemen.  Reasonably, you’d expect that to change as the season continues to progress as the save percentage levels out.

We won’t get too far into the weeds with the special teams aspect of this save for to highlight that Letang has had a positive impact on both the penalty kill and powerplay just as he has at 5v5 (via Hockey Viz).

Again, not much changes on the defensive side of the puck for the Penguins this season.  Even shorthanded, relative to the rest of the league, they aren’t allowing much from in front of the net and that especially holds true when Letang is out killing penalties (left)

In fact, when Letang comes off the ice, teams begin to have some freedom from Ovechkin Street (brown, right), which is usually the area of the ice Letang occupies on the kill.

On the powerplay, it’s the same old story.

While the powerplay has had its struggles this season, it has been far better with Letang than without him.

Without Letang (right), the Penguins get absolutely nothing going from the middle of the ice relative to the rest of the league.

But with Letang (left), they see a lot more attempts coming from between the circles and near the net.

And no matter how you shake it, he has had himself a very solid campaign for this team in every facet of the game, making the Pens far and away a better team when he’s on the ice.

And when this team gets fully healthy, you can fully expect Kris Letang to reach an even greater level.