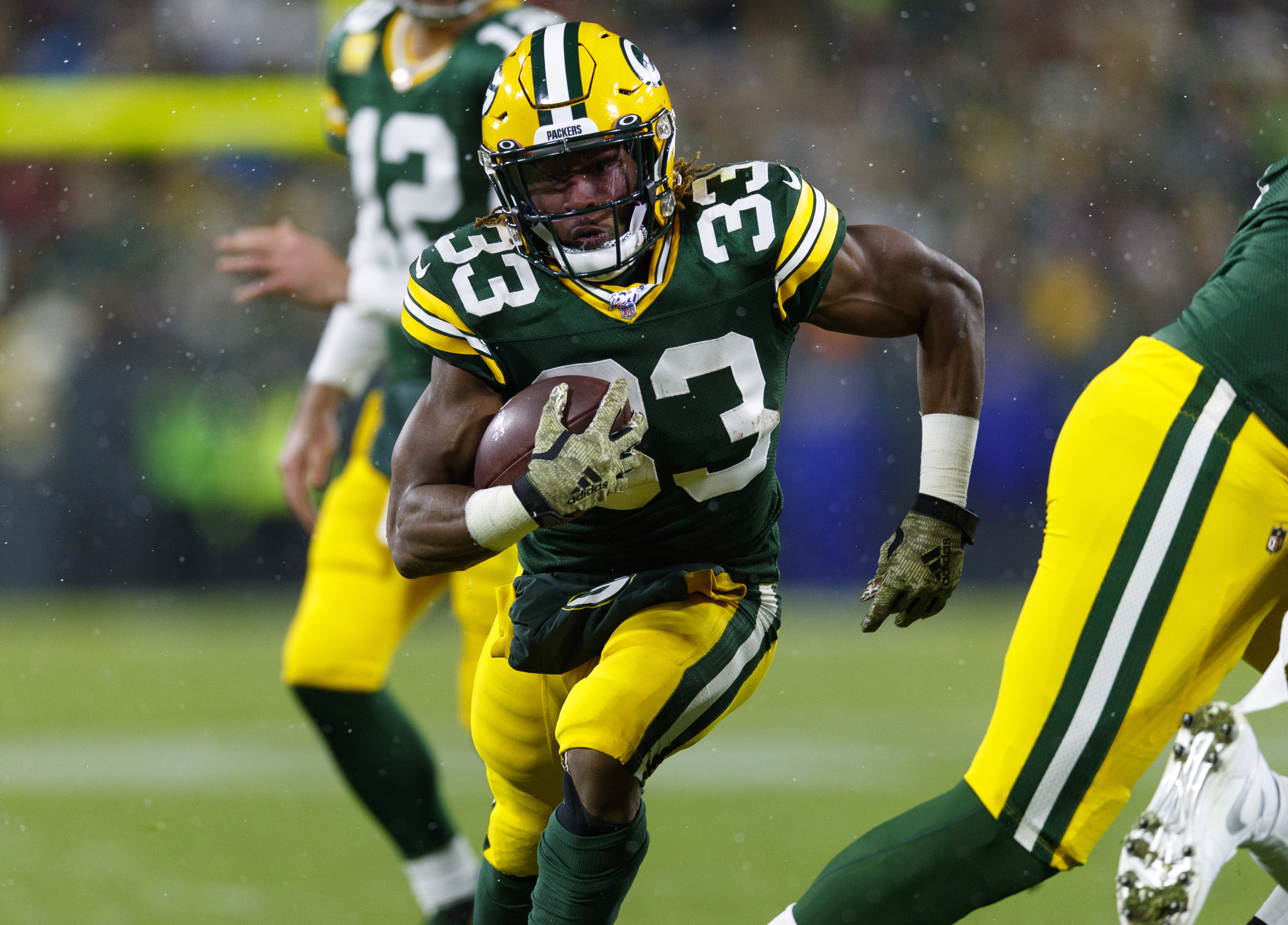 Aaron Jones has been a standout for the Packers this season. The third-year pro out of UTEP ran for two more touchdowns last week against the Bears, giving him 14 rushing touchdowns and 17 total touchdowns for the season.  Jones is now close to several long-standing single-season franchise marks and has been enjoying one of the strongest seasons in Packers history.

Jones has already set a career-high with 830 rushing yards in a season. He needs 170 yards (or 85 yards per game over his final two contests to become the first Packers to gain 1,000 yards rushing in a season since Eddie Lacey in 2014.

When it comes to the Packers record book, Jones finds himself in elite company. The franchise record for touchdowns in a season was set by Ahman Green back in 2003. Green ran for 15 touchdowns that season and caught five passes for scores as well. He also rushed for a career-high 1,883 yards which remains the Packers single-season record.

Prior to that, the record was held by Hall of Famer Jim Taylor who scored 19 touchdowns in just 14 games back in 1962. All 19 of Taylor’s touchdowns came on the ground during his career-best 1,474-yard season. Taylor scored four rushing touchdowns in back-to-back games in November of that year, first during a 38-7 win in Chicago against the Bears and then in a 49-0 route of the Eagles in Philadelphia.

Wide receiver Sterling Sharpe scored 18 touchdowns for the Packers during his final season in the NFL in 1994. Sharpe finished the year with a flourish, scoring at least one touchdown in his final six games and totaling 11 scores in his final five contests. He was then diagnosed with a neck injury that first kept him out of the playoffs that year and then ended his career.

With 17 touchdowns, Jones has tied Hall of Famer Don Hutson for fourth place on the team’s single-season touchdown list. Hutson accomplished the feat in 1942 during an 11-game season.

Jones has been getting into the end zone consistently this season for the Packers. He has scored at least one touchdown in nine of the team’s 14 games. His best games came in Dallas when he ran for four scores in a 34-24 win over the Cowboys and in the snow against Carolina when he ran for all three of the Packers scores in a 24-16 victory.  In Kansas City, he caught seven passes for 159 yards and a pair of touchdowns in Green Bay’s 31-24 upset of the Chiefs.

Packers head coach Matt LaFleur realizes the talent he has in Jones. “I really do think he is turning into a complete back, or is a complete back,” LaFleur said shortly after the win over the Raiders earlier this season. “The obvious is when he runs the ball, but what a catch he made. He had two really spectacular catches. Then you put in the other component of blocking and being able to pass protect, he is a complete back.”

Opposing coaches are also taking notice of Jones’ talents. “I think he’s one hell of a running back,” Bears defensive coordinator Chuck Pagano said a few days before the Packers Week 15 win over the Bears. “He’s good when they hand the ball off to him, he’s good in space when they throw it to him and he’s a good protector. He becomes a matchup issue for you defensively, so you have to have guys that can cover on him. He runs routes like a receiver out there and catches balls like a receiver. He’s having a great year.”

After the win over the Bears, reporters asked Jones if he was aware how close he was to the Packers single-season touchdown record. “I didn’t even know it was three off,” Jones admitted. “I just want to keep getting into the end zone and keep scoring and at the end of the year, see how many I can put up.”

Jones insisted he didn’t feel any expectations despite his recent success. “I just go out and do my job, just do what I’m asked,” he said. “We’re all professionals and everybody else does their job so I don’t feel like there’s any expectations or anything.”

LaFleur has done a good job of spelling Jones this year with Jamaal Williams. This has helped keep Jones fresh, healthy and effective as the season has worn on. Clearly, the Packers will need Jones to continue to shine if the Packers hope to beat the Vikings Monday night and win some games in January as well.