Too Little, Too Late as Wild fall 3-2 to Vegas 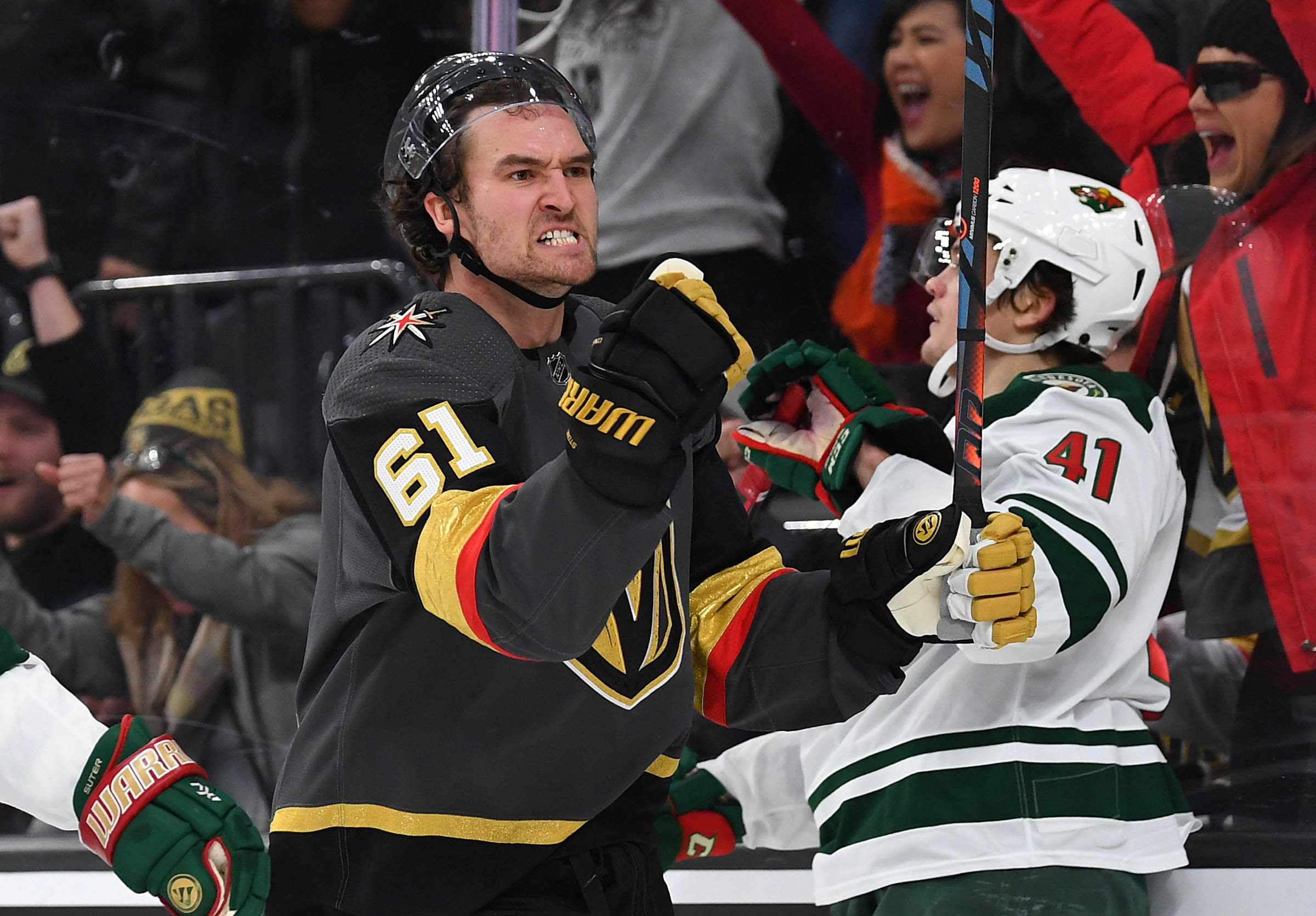 Too Little, Too Late as Wild fall 3-2 to Vegas

Are you busy scrambling with some last-minute holiday shopping?  Still wondering what to get someone in your family or your circle of friends?  Or is all your running around over and done with and you can finally sit back and relax?  The Minnesota Wild sure wish they could as they make their way to Las Vegas to play against the Golden Knights.  Such is life in the NHL.

1st Period Thoughts:  Minnesota had the first high quality scoring chance of the game as Kevin Fiala raced into the Vegas end as he tried to swing a pass across the crease towards a crashing Victor Rask that just didn’t get their in time before the puck was steered to the corner.  The Golden Knights tried to give the Wild some trouble with their superior team speed as Reilly Smith was flying around the Minnesota end but the Wild were able to deny Vegas from having any space in the middle of the ice.  Ryan Hartman would trip up Max Pacioretty to give Vegas its first power play of the game.  On the power play the Vegas would enter the zone with speed, but Minnesota stayed calm and forced the Golden Knights to settle for shots from the perimeter.  The Golden Knights were blasting shots high and wide of the mark and Minnesota would get a big early kill.  The Golden Knights were trying to overwhelm the Wild offensively by activating their defense as Nic Hague tried chasing a puck down below the goal line in the Minnesota end only to be stapled to the boards by a nice hit by Matt Dumba.  Vegas was feeling bold as they attacked off the rush and Alex Tuch set up Mark Stone for a chance that was steered aside by Alex Stalock.  The Golden Knights were starting to dominate the play as Shea Theodore found some space and he’d rifle a shot from the point that hit the side of the net.

Minnesota was trying to work their way open to start sending some shots on Marc-Andre Fleury but the Golden Knights were applying timely puck pressure and the Wild was unable pull the trigger.  The Wild would try to work their cycling game but the Vegas defense was moving well.  Stalock had to be on his game as the Golden Knights were taking any chance to blast shots on goal hoping to shake his confidence.  Nate Schmidt would take a hooking penalty when he held up Eric Staal.  The Wild nearly cashed in the opening seconds of the period as Zach Parise was almost able to tap a puck in from his stomach only to have it punched away by the leg of a sprawling Fleury.  After Parise’s initial chance, the Wild were not able to generate much in the way of shots as Vegas’ puck pressure cause Minnesota some trouble.  In fact as the penalty expired, Schmidt nearly cashed in on the breakaway as his shot missed high.  The Wild would get another power play as Reilly Smith tripped up Ryan Hartman.  The power play didn’t start too well as they’d lose the initial draw and clear the zone and then Dumba would fumble away a puck giving the Knights a shorthanded chance.  But just after they pounced on the puck Stone was given an interference penalty giving the Wild a 5-on-3 power play.  Minnesota would take advantage of the 5-on-3 as Staal threaded a pass over to Mats Zuccarello for nice backdoor goal that drew the ire of Fleury as the Wild had a 1-0 lead.

GOAL. Mats Zuccarello scores on the power play to give Minnesota the early lead.

The Wild still had power play time to work with and they’d come close to cashing in as Brennan Menell‘s point shot gave Fleury a little trouble but he was able to pounce on the puck to keep his team only down by 1 going into the first intermission.  It wasn’t a great period for the Wild, where I felt Vegas was outworking them but they made their power play opportunity count and so far that’s the difference in the game.  Dumba still looks like he’s fighting the puck, not pretty.

2nd Period Thoughts:  Minnesota did absolutely nothing with the near minute of power play time they had left over from the 1st period.  After the failed power play, the Wild started to skate a bit better and were able to cause some trouble in the offensive zone as the 4th line of Nico Sturm, Marcus Foligno and Hartman created a few scoring chances.  The physical game also began to intensify as William Carrier leveled Dumba with a big hit, but Minnesota would answer with of their own as Jordan Greenway blew up Ryan Reaves with a nice check.  The Wild kept being pesky in the offensive zone, as they kept holding the zone and taking their chances to send shots on goal.  The Wild would get caught pinching and give up a 2-on-1 for the Golden Knights and Stone set up Chandler Stephenson for the goal.  1-1 game.  The Golden Knights were taking every chance to hit, cross-check Wild forwards and the contact was starting to tell as the Wild struggled to complete passes and this meant the play started to tilt more frequently into the Minnesota end.  The chippy plays after the whistle would be a theme as the Wild took issue with some of the liberties players like Deryk Engelland was getting away with like blatant cross-checks to the back.  Minnesota would draw a cross-checking penalty as he hit Rask in the back, and moments after that he broke his stick while cross checking the Wild forward.  On the power play the Wild looked focused as Dumba ripped a shot that was blocked and the Knights counter attacked as Smith let go of a shot that missed high.  Brad Hunt would let go of a shot from the point that Fleury gloved and there was another scrum after the whistle as Greenway and Engelland exchanged shoves.  The power play would come up empty and the momentum they had seemed to disappear.   The Golden Knights really poured it on in the last minute of the period and their pressure paid off as Theodore beat Stalock with a wrist shot with just 10 seconds left in the period.  2-1 Vegas going into the 2nd intermission.  Minnesota’s inability to get the puck out of the offensive zone just was begging for a disaster and that’s exactly what they got.

3rd Period Thoughts:  The Golden Knights would have a few quality chances to start the period as Stone and Max Pacioretty fired a few pucks on Stalock.  Minnesota would counter attack off the rush as Kunin set up Dumba off the rush but he’d push a shot wide of the yawning cage.

Entire net was open for Dumba. He has literally no confidence right now. pic.twitter.com/tSoHXN2bmX

Minnesota would spring Staal for a bit of a breakaway near the end of a shift and perhaps fearing he didn’t have the legs to move in close he’d wind up and blast a slap shot on goal that was absorbed by Fleury.  The Wild kept hustling and they’d draw another penalty as Fiala was tripped up by the Golden Knights’ goalie.  Minnesota did little with the power play as they were unable to get set up in the offensive zone.  Dumba continued to fumble with the puck and his passes lacked accuracy and pace.  After the big kill, the Golden Knights went on the attack as Tomas Nosek would fire a shot by a fairly well screened Stalock.  3-1 Vegas.

GOAL. Wild fail to score on the man advantage and then immediately give up a Tomas Nosek score. Two-goal game now.

Minnesota looked somewhat lost and fatigued at this point and the Golden Knights were going into lockdown mode by working pucks deep and keeping the Wild busy and having to defend in their own end of the ice.  Poor passing and juggled lines certainly didn’t help Minnesota’s execution on even the most simple of plays.  The Golden Knights almost looked like they were toying with the Wild as their superior team speed meant they could stay with Minnesota’s skaters with relative ease.  The Wild were being a bit picky with their shots, trying to set up the perfect shot instead of taking what Vegas was giving them.  Alex Tuch had a good chance that was gloved by Stalock to keep his team within two.  Marcus Foligno had a nice opportunity to cut the Vegas lead to one as he and Nico Sturm charged the net but somehow Fleury was able to steer the puck to the corner on a chance from near the crease.  When the Wild were taking shots from the perimeter they did so without a screen which made it fairly easy for Fleury to make the save.  Minnesota would take a timeout with a little under than 3-minutes left in regulation.  The Wild would pull Stalock for an extra attacker and after about 20 seconds to get set up Minnesota was able to work the puck around the perimeter and from down low back out to the point to Fiala who let go a slap shot that was stopped by Fleury but he wasn’t able to stop Parise’s chance on the rebound.  3-2 Golden Knights.  Minnesota would have another golden chance as a point shot by Dumba created a chance off the rebound for Staal but he wasn’t able to muster a shot on goal.  The Wild had one last furious chance in the closing seconds but Fleury and the Golden Knights were able to steer the puck to the corner and breathed a sigh of relief as they held on for a 3-2 win over Minnesota.

Why yes, that would be JT Brown's second of the game, thank you for asking. #IAvsONT pic.twitter.com/PIafzUrR2S

LW – Adam Beckman (Spokane, WHL) ~ the goal-scoring winger is pulling the trigger more often and being rewarded for it as he had a goal on 8 shots in Spokane’s 4-3 shootout loss to in-state rival Everett on Sunday night.  Beckman has 20 goals, 49 points, 8 PIM’s and is a +23 in 30 games.

#mnwild prospect Adam Beckman with his 20th goal on the season. He has 49 points in 30 games played. https://t.co/RpzulsSJHI