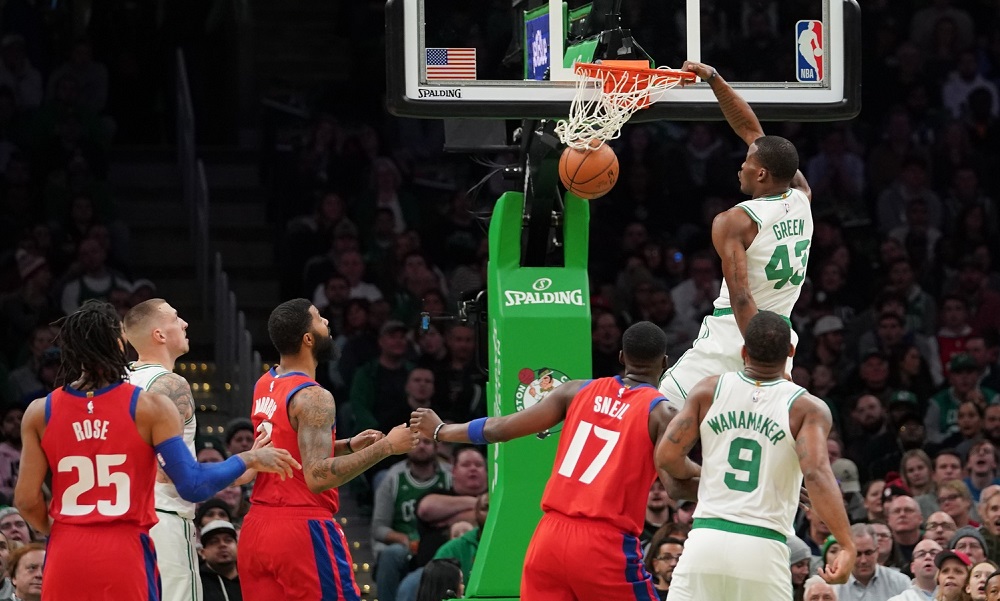 Jaylen Brown and Jayson Tatum both scored 26, Grant Williams had a career-high 18 points, and 19,156 fans will be telling everybody they know that they were there when Tacko Fall made his Celtics home debut with 5 points in 4 minutes.

The Celtics demolished the Pistons in a runaway, 114-93, to move to a 19-7 record. The defense smothered Detroit (40% shooting and 25 turnovers) all night, and the bench provided a huge lift.

What if I told you all 11 active Celtics players scored in a game where Boston put up 114 points and the low-man was Kemba Walker with 2 points on 2 free throws?

Marcus Smart, Gordon Hayward and Robert Williams remained out with injuries. Blake Griffin, Reggie Jackson and Luke Kennard were missing for the Pistons.

Tatum was hot early; he played all 12 minutes and ended the quarter 6-of-11 for 13 points.

Tatum snakes the PnR and hits the tough fadeaway. 3/3 to start the game pic.twitter.com/c8NvoB200w

Romeo Langford was first off the Boston bench and contributed immediately.

Langford just read and cut off a Rose pass toward the corner in transition. Good play as he jumps into his 2nd night of real NBA action.

The Kanter Experience (he finished with 18 boards in 21 minutes).

Kanter is putting in work against Drummond on the offensive glass.

Leaky few possessions for Kanter inside with Maker, Rose and Gallaway going right at him for makes.

Grant Williams made another three!

One hell of a stint for Javonte Green. Making stuff happen on both ends just by using his athleticism.

Jaylen was winning his matchup.

It got even better in the final two minutes of the second as Jaylen exploded.

Just a casual 10 points in 92 seconds for Jaylen Brown.

JB dropped 15 in the quarter and the Celtics led at halftime, 60-48. The Pistons committed 15 turnovers that led to an astounding 26 points for Boston.

If any (or all) of them bust loose in the 2nd, this will be a runaway blowout.#Celtics https://t.co/wQrQ9OUToh

Daniel just fucked Drummond’s life up twice in a row

And Tatum was doing it all.

The only Celtic to struggle was, of all people, Kemba (he finished with just 2 points, but 11 assists). It didn’t matter.

Kemba Walker has 1 point with 5:28 left in the third quarter, and the Celtics are leading Detroit by 15 points. #thingsthatneverhappenedwhenheplayedincharlotte

The Celtics don't have Marcus Smart or Gordon Hayward.

Kemba Walker is 0-5 with 7 turnovers…

A strong We Want Tacko chant has started, now that the Celtics are leading, 81-63.

A Detroit field-goal drought of about five minutes put them down them more than 20 points, and the Celtics led, 91-69, going to the fourth. It was 12 minutes of fun, Gino Time and Tacko-mania.

This is the best thing you will see all day. I promise. pic.twitter.com/leNL2oiaIc

Tacko’s first hoop at the Garden.

Tacko Fall shows off the fakes and footwork in his @celtics home debut! 🌮#NBARooks #Celtics pic.twitter.com/Jtk3V2nrTk