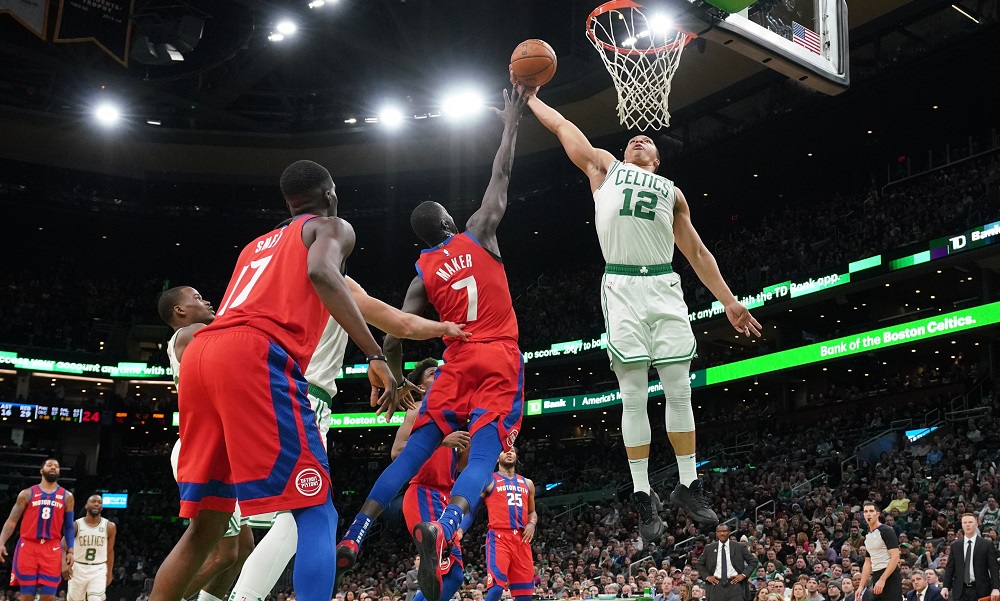 It’s difficult to imagine winning a blowout when your leading scorer manages only 2 points, but that’s where we are after the Celtics took care of the Pistons last night, 114-93. Here’s a closer look at some of the reasons.

The rookie from Tennessee was on the court for almost 30 minutes – double his usual playing time – and he made the most of it, scoring a career-high 18 points on 8-of-10 from the field. Grant had a highlight-reel putback dunk and also made 2-of-3 from behind the arc. The guy who started his career 0-for-25 from deep has now hit 4 of his last 7 attempts.

Grant has played 10 or more minutes 17 times so far. The Celtics are 15-2 in those games. They are 4-5 in the games Grant played under 10 minutes. He really is the 6-foot-6 version of Marcus Smart.

On a team where four of the normal starters average a combined 80 or so points per game, the second unit is not expected to provide too much scoring punch. And they usually don’t. But last night, Boston’s bench outscored their Detroit counterparts by 49-43.

Romeo was finally healthy enough to go 18 minutes in his first significant playing time. He looked smooth on offense and contributed 2 steals on defense. His 3 buckets were the first of what we hope will be a long career in Boston, not Maine.

The Pistons’ big center has long been a matchup nightmare for the Celtics. Drummond came in averaging roughly 18 points and a league-high 17 rebounds this season – numbers he had achieved 10 times in the past vs. Boston, per Basketball Reference. But last night, his 12 and 11 in 31 minutes didn’t come close to that.

Daniel Theis and Kanter guarded Drummond most of the night and kept him in check. Theis had 4 blocks (2 of them on Drummond) in 22 minutes, and Kanter was simply more aggressive in collecting 18 boards (5 offensive). It seemed like we didn’t hear Drummond’s name very often, and that was great news for the Cs.

A bad night can happen to the best of them. Kemba couldn’t get out of his own way, missing all 6 shots he attempted and committing 7 turnovers. Some of his bad passes were really bad, ending up several rows deep in the expensive seats.

But the veteran point guard delivered a season-high 11 assists and kept his spirits up.

I agree! 2 pts on the night and he was still laughing and smiling like he scored 50

🌟TONIGHT in a galaxy not so far, far awa …Actually, it's in a Garden, pretty close (& on @NBCSBoston). It is a period of adversity, w/ injuries mounting, this small band of #Celtics is ready to overcome the challenge of the Bad Boys from Detroit #StarWarsRiseofSkywalker pic.twitter.com/sMcdLt90Qg

just wait for Robert Williams’ answer. it’s worth it. pic.twitter.com/keEg2UDlXJ