Hellebuyck and the Jets Silence the Wild in 6-0 Rout 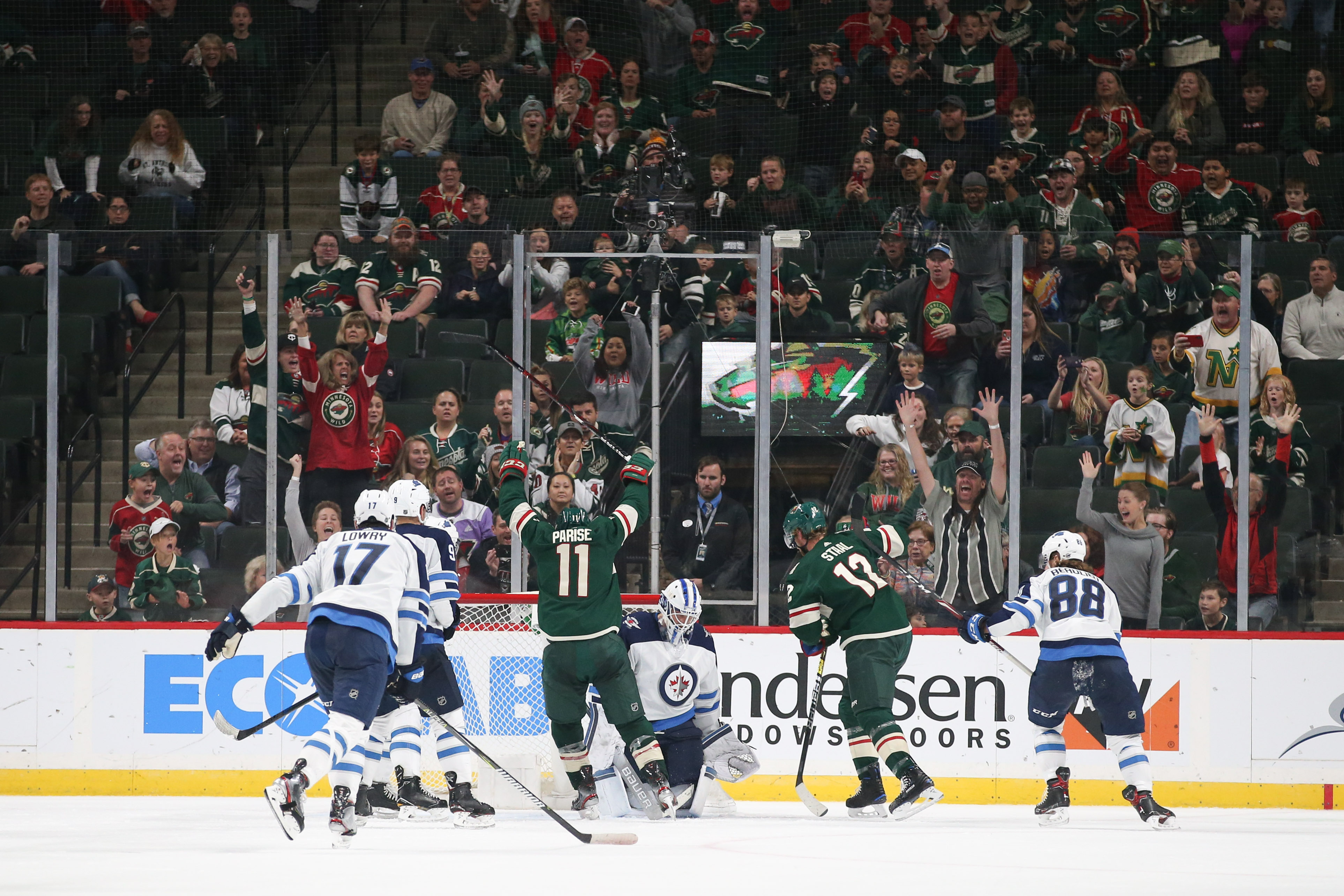 Hellebuyck and the Jets Silence the Wild in 6-0 Rout

After Thursday’s barn burner in Arizona, Wild Head Coach Bruce Boudreau said it best, “Like, (the late and great) Roger Neilson hated this kind of game, but you need it every now and again.”  You could see Boudreau simmering on the bench during the game, but when you win you can sort of laugh about it and move on to a certain degree.  It wasn’t the Minnesota Wild’s best hockey by a long shot, but they appeared to have rattled one of the better goaltenders in the league and took full advantage of it.

The Winnipeg Jets have endured an up and down season, and they still have enviable firepower up front but most of their best players are having a mild start so far.  The Minnesota Wild will hope to keep that offense in check this afternoon.  Can Minnesota earn a big home win in their steady climb out of the Central Division basement?

1st Period Thoughts:  The Jets would work the puck down low early, cycling the puck with Kyle Connor and Patrik Laine, but Minnesota would break out of their own end and go on the attack.  Eric Staal would feed a pass near the top of the crease that was redirected on goal by Zach Parise for a leg-pad save by Connor Hellebuyck.  Minnesota was breaking out of their own end with clean passes and generating speed through the neutral zone.  The Wild were doing a nice job of keeping Winnipeg hemmed in its own end as the defense was stepping up and working pucks deep.  The Jets finally managed to get a shot on goal as Nathan Beaulieu sent a wrist shot towards the Wild goal that was snatched out of the air by Alex Stalock‘s glove save.  A few minutes after that, a neutral zone turnover was transitioned for a chance by Laine whose wrist shot was absorbed by Stalock.  Minnesota was being pesky on the puck and the top line gave the Jets’ fits as Ryan Suter was stepping up to hold the zone and the Wild’s forecheck was creating turnovers making it look like a power play for about a minute.  The Jets would try to get their forecheck working a bit.  Stalock would make a big save and the Wild counter attacked on the breakout as Marcus Foligno found Ryan Hartman with an outlet pass but as he tried to pull off a toe drag he’d lose the puck.  Both clubs were playing a tight checking game and time and space was hard to come by.  Minnesota would earn the first power lay of the game as Luca Sbisa hauled down Nico Sturm before he could get to a rebound off a point shot by Suter.  On the man advantage, the Wild were able to get set up in the offensive zone but the puck movement was too slow to open up shooting and passing lanes.  The Wild would get caught pinching freeing Adam Lowry and Blake Wheeler on a partial 2-on-1, and it was Lowry feeding the puck across to Wheeler which was tipped by Zuccarello and gathered up by Wheeler who fired it by Stalock.  1-0 Jets on the shorthanded goal by the former Breck star.

The Wild tried to answer with its 2nd power play unit and they had a few nice set ups of Matt Dumba, including his best chance as he was looking for a redirection by Ryan Donato that skittered harmlessly through the Jets’ crease.  Minnesota came up empty on the power play, but could the team answer back on the scoreboard before the end of the period?  Mats Zuccarello made a great diagonal pass off the rush to Parise who fumbled the puck slightly before fluttering a shot on goal that gave Hellebuyck just enough time to get across to make the save.  Jonas Brodin would let go a shot from the point that reached Hellebuyck and was just out of reach of Foligno.  The Jets would add to their lead with just 5 seconds left, moments after a sequence where Kyle Connor had a near chance that was swept aside at the last minute by Carson Soucy.  Instead of clearing the zone the puck went out to the point where Sbisa stepped into a slap shot that was redirected by Mark Scheifele and by Stalock to give the Jets a 2-0 lead going into the 1st intermission.

It was a tough way to end a period where the Wild were playing fairly well but just not finding the back of the net.

2nd Period Thoughts:  Poor passing plagued the first few minutes of the 2nd period as it thwarted potential rushes into the Jets’ zone.  Minnesota would finally have a great opportunity as a point shot by Dumba was knocked down by Hellebuyck, and Donato would poke away the puck before he could cover it up but the officials blew the play dead before he was able to stuff it into the yawning net to some boo’s from the home crowd.

Loose puck in front of Hellebuyck, but the play is blown dead early. pic.twitter.com/Oe1Qh1o2iU

Minnesota kept applying offensive pressure as Hunt stepped into a slap pass as he was looking for a redirection that just failed to connect.  The Jets would try to work its forecheck, mucking and grinding along the boards but Minnesota was able to chip the puck out and then go on the attack as Kevin Fiala motored into the Jets’ zone and then swung behind the net but his short-side shot was denied by Hellebyuck who held the post well.  The Jets would add to its lead as Laine beat Stalock with a laser of a shot that went blocker side.  3-0 Jets as Boudreau just shook his head.

Minnesota would draw a penalty as Suter found Donato on a stretch pass but he was unable to get by Anthony Bitetto who held up the Wild winger.  On the power play the Wild struggled to do much offensively as slow puck movement meant shooting lanes were denied and there was little to look at.  As the penalty expired a poor pass would get behind Hunt and the Jets would race down the ice in a 3-on-0, as Kyle Connor fired a wrist shot that was steered aside by Stalock.  Minnesota was clearly frustrated in the closing minutes as Foligno and Sbisa had a few words to exchange as the period expired with the Wild trailing by three.

3rd Period Thoughts:  The Wild would start the period on the penalty kill as Foligno got a roughing call for the scrum at the end of the 2nd.  The Jets’ power play would be short-lived as Scheifele was called for goaltender interference as Stalock did his best soccer flop after a pretty minor bump.  With the ice more open 4-on-4, the Jets took full advantage as Kyle Connor swept up a loose puck in his own end and raced down the ice to have a 2-on-1 with Nikolaj Ehlers, as Connor set up Ehlers for an easy goal as he waited for Stalock to drop before beating him on the backhand.  4-0 Jets.  Minnesota’s passing continued to be sloppy and mostly area-type attempts as opposed to going tape-to-tape.  The Wild lacked cohesion in just about everything they were doing, as they getting in each other’s way.  The frustration was starting to boil over for the Wild as Fiala would get into a shoving match with Hermantown’s Neal Pionk and both players would go to the penalty box.  A little while after that, Zuccarello would get tangled up with Josh Morrissey giving the Jets a rare 4-on-3 power play.  The Jets wasted little time on the man advantage as the Wild just seemed to leave Laine wide open and Wheeler would feed him the puck for a one-timer that blazed by Stalock.  5-0 Jets to a collective apathetic groan from the home crowd.  After Laine’s goal, Donato, Fiala and Dumba took their turns firing shots on goal that were all blocked aside by Hellebuyck who was hoping to keep his shutout bid intact.  The Wild just were going through the motions and the Jets kept applying the pressure as Jansen Harkins drives wide and swung a pass out into the slot and sets up Logan Shaw for an easy goal.  6-0 Jets as the Wild swapped out Stalock for Devan Dubnyk.  Not really sure why you pull your goaltender now, when the game is more or less decided as your team trails by six.  The Jets were content to sit back and defend their lead as they hoped to give their goalie his 3rd shutout of the season.  In fact it almost as though the Jets were toying with the Wild, trying to set up tic-tac-toe chances.  Luke Kunin would drop the gloves with Beaulieu and the Jets defenseman took an early advantage with a storm of jabs.  Kunin tried to rally back with a few jabs of his own but it was Beaulieu throwing a haymaker which caught Kunin and both players tumbled to the ice.  Clear win for Beaulieu.  The next few minutes were a morass of the Wild chasing the puck around the ice and accomplishing very little to a few apathetic reactions from the annoyed home crowd.  Dumba would take a high sticking penalty giving the Jets another chance with the man advantage with less than 5 minutes left in regulation.  The Jets would give its bottom 6 lines the chance to score on the power play.  Minnesota’s penalty killers would keep the Jets’ power play mostly to the perimeter.  The Wild would kill the penalty but Parise would send a puck up into the stands to give the Jets another power play to end the game.  Dubnyk would help Minnesota kill the penalty, but the game would end with a small chorus of boo’s as they fell 6-0 to Winnipeg.

Check out this vicious cheap shot by Grand Rapids’ Jarid Lukosevicius who head-butted Gerald Mayhew late in the game.  He got a 10-minute game-misconduct but I think this is worthy of a lengthy suspension.

Aaannnnd he's out of here.

Lukosevicius heads to the locker room for this one. 👿 pic.twitter.com/B1ks1InZJn

G – Hunter Jones (Peterborough, OHL) ~ the goaltender earned 1st star honors as he stopped 27 shots in the Petes’ 4-1 win over Oshawa on Thursday.  Jones has a 21-3 record with a 2.45 goals against average and a .921% save percentage with 1 shutout.