Three takeaways from the Islanders loss to the Blue Jackets 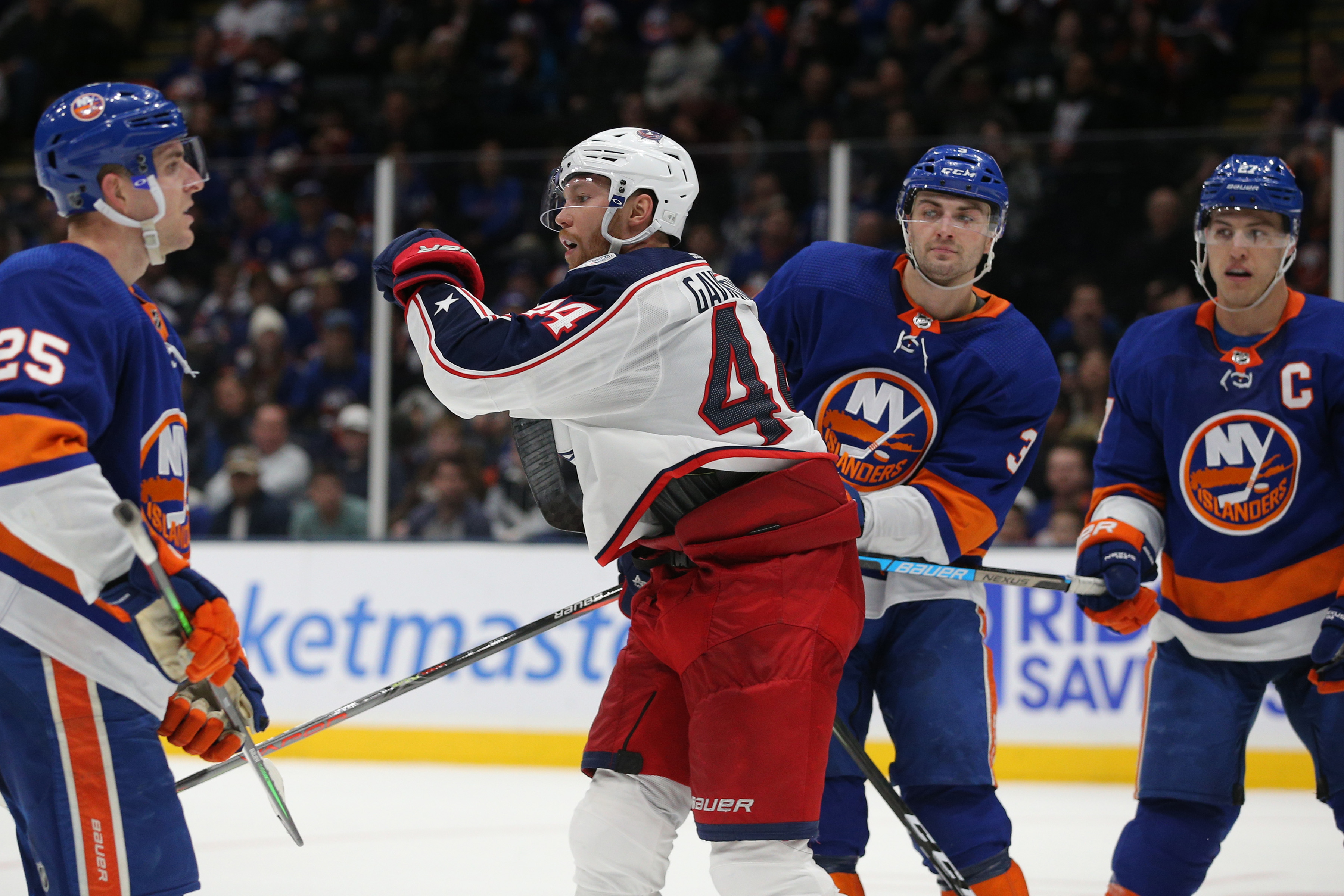 Three takeaways from the Islanders loss to the Blue Jackets

UNIONDALE, N.Y. — It was a night where it seemed victory was in sight, but instead the Islanders headed into the holiday break dropping three of their last five games. That included Monday’s 3-2 loss to the Columbus Blue Jackets.

The Blue Jackets scored the go-ahead goal with 3:29 left in the third and Joonas Korpisalo made 35 saves to hold off the Islanders. Anders Lee and Mathew Barzal scored for New York, while Thomas Greiss made 32 saves.

It has become a theme over the Islanders’ recent stretch where they’ve been making uncharacteristic errors. The Islanders gave away the puck 22 times on Monday night and even goaltending struggled at times.

On the game-winning goal, Alexandre Texier’s shot fluttered towards Greiss, who couldn’t control the puck and left the juicy rebound for Vladislav Gavrikov to bury.

Earlier in the game, Noah Dobson attempted to pass the puck from behind the Isles’ net and instead bounced it off a Blue Jackets player right to Nathan Gerbe. The Columbus forward was able to quickly capitalize on the error and beat Greiss with a backhander.

“Right now we’re making some mistakes and they’re ending up in the back of the net,” Islanders head coach Barry Trotz said. “Some of them are unforced and that’s the thing that’s hard. … We talk about being predictable and everyone being on the same page. It seems the last few games there’s one guy that’s smarter than the rest and gets us in trouble.”

The Islanders also took an ill-advised penalty in the second period that cost them a goal. The Islanders have surrendered a goal on the penalty kill in five straight games and allowed seven goals in their last 19 time shorthanded, according to statistician Eric Hornick.

“They’re just going in a little bit. A couple seeing-eye shots,” Anders Lee said about the penalty kill. “Our PK is phenomenal. Those guys sacrificed a lot of stuff and their bodies. Put themselves in compromising positions and they deserve a lot of credit for what they do. They just haven’t gotten the bounces they deserve.”

The NHL will be dark for the next three days during the holiday break, so the Islanders won’t get a chance for a quick response to Monday’s loss. New York won’t play again until Friday when they travel to Chicago to face the Blackhawks.

“You don’t have that opportunity to get right back at and we wanted to get this one before the break,” Lee said. It’s frustrating. We have to sit on it, but now we just come out in Chicago and right the ship a little bit.”

The Islanders had gone into the three-day break in December with a win in four straight seasons leading into Monday. The last time they lost before the holiday was a 3-1 loss to the Montreal Canadiens on Dec. 23, 2014.

"We're making mistakes that are ending up in the back of our net. We have to find a way to clean those up because it's uncharacteristic of us." – Jordan Eberle pic.twitter.com/9sbZqlxJqX

“We’ll have a few days here to refresh and get reenergized, and be ready for Chicago,” Jordan Eberle said.

The Islanders have a tough post-break schedule starting in the Windy City. From there, they’ll travel to face the Minnesota Wild and finish off the three-game road trip in Washington D.C. against the Capitals.

Andrew Ladd hadn’t played for the Islanders since March 24, but that changed on Monday. Ladd appeared in his first game since, racking up a team-high five hits in 9:53 of ice time.

Ladd was recalled from AHL Bridgeport on Saturday before the Islanders lost to the Anaheim Ducks.

“I thought he did some good things,” Trotz said about Ladd. “He’s got such a good stick, you could see that he could make those plays. Understands systematically where to be on the right side. I thought for the first time through it was good.”