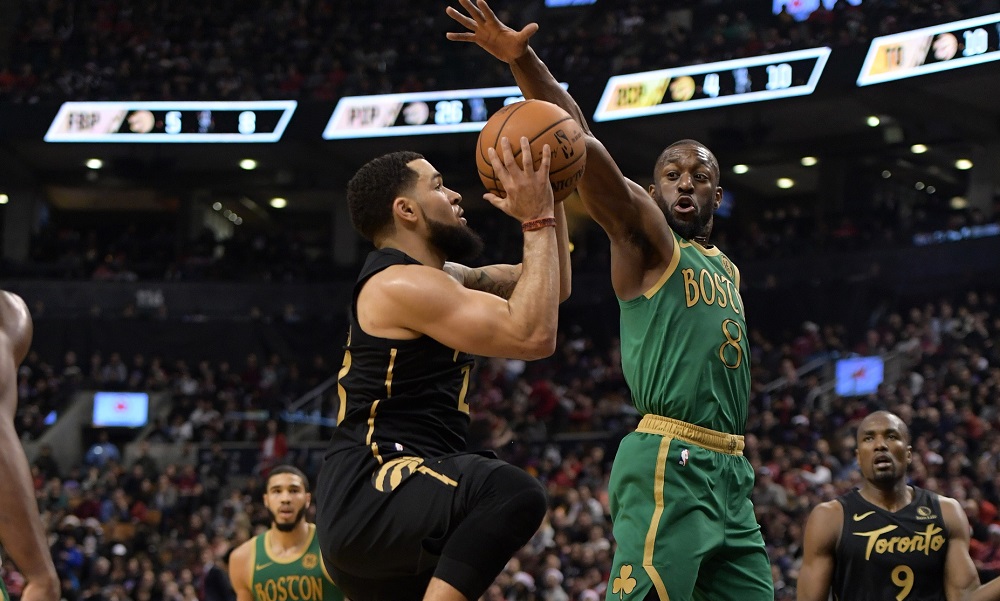 The Celtics hadn’t won in Toronto since April 2015, but their 8-game losing streak there is over now thanks to a dominating 118-102 victory in which they answered every Raptors challenge. Jaylen Brown led the way with 30 points on phenomenal shooting (10-of-13 and 5-of-7 threes).

Jaylen Brown (30 points) becomes the first Celtics player to score 30+ points on the road on Christmas Day since Rajon Rondo did so on Dec. 25, 2011 at NYK

For the Raptors, Fred Van Vleet led with 27 points and Chris Boucher added 24 off the bench. The Raptors were shorthanded, without Pascal Siakim, Marc Gasol and Norman Powell. For the Cs, Marcus Smart was there but still not ready after his double eye infections. Gordon Hayward returned to active status and started with Theis, Kemba and The Jays.

It didn’t begin well, but that changed in a hurry.

And almost as quickly, the Celtics have answered with a 9-0 run.

Once Boston took the lead at 15-14, they never fell behind again.

I'm sure Grant was just pump-faking the Ghost of Christmas Past. pic.twitter.com/W6rnqa9AuB

#NEBHInjuryReport Grant Williams suffered a right index finger dislocation. It has been corrected and x-rays were negative. He is available to return.

Early Romeo Langford minutes even with Hayward back. Promising sign for how well rookie looked over the last two games.

Kanter is currently leading both teams in both points and rebounds

Toronto outscored Boston by a point in the second, but at halftime the Cs still had a solid lead.

Five assists for Gordon Hayward so far. This one was great. pic.twitter.com/IEIxxAir2Y

The Celtics led by 12 when Fred Van Vleet’s three cut it to 9, but Kemba answered immediately with his own three to restore the cushion – that was a pattern throughout the game.

Jaylen then caught fire: he made all 5 shots he took (3 of them triples) and had 16 points and 4 rebounds in the period.

This is how Jaylen Brown finished off his 16-point 3rd quarter 😳 pic.twitter.com/6oqIv7Pk6Q

Raptors began the fourth in a full-court press and scored 5 quick points, but Brad Wanamaker and Tatum combined for 6 straight to give Boston its largest lead to that point at 94-74.

Some drama: this Tatum jam popped back out and was disallowed for offensive basket inference. Brad challenged the call, and won.

That hoop needs to get in the Christmas spirit 😐 pic.twitter.com/iK28opndlh

And the call was, in fact, overturned. Goaltending on Chris Boucher. Made basket. Raptors ball, down 20, with 8:52 remaining. https://t.co/98IrlKCM6e