Your Morning Dump... Where (sung to the tune of 12 Days of Christmas) four wings a scorin' could lead to 60 wins and a one seed 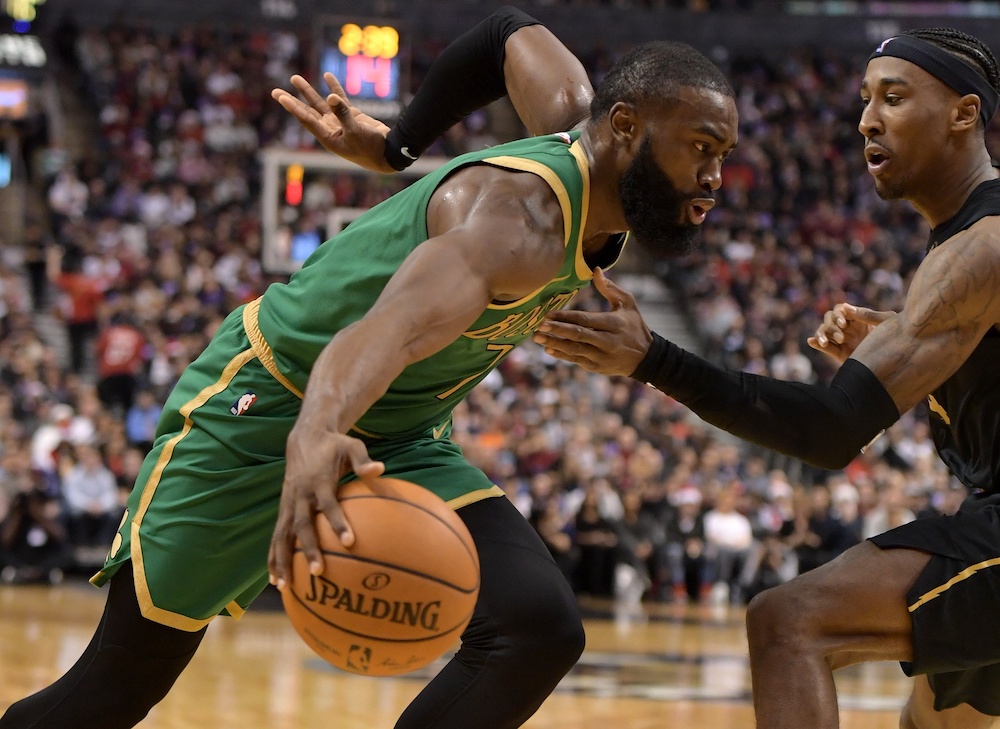 Your Morning Dump... Where (sung to the tune of 12 Days of Christmas) four wings a scorin' could lead to 60 wins and a one seed

Presumably nobody reading this was surprised to see Hayward having a positive impact, but once again, we got a look at how good the Celtics are with all of their best offensive weapons on the floor. According to Cleaning the Glass, the Celtics are 24.8 points per 100 possessions better with those four, in large part thanks to the offense: 128.4 points per 100 possessions, which is in the 100th percentile league-wide.

Mass Live — nine things we learned from Celtics vs. Raptors

Yesterday’s Christmas Day game was highlighted by Jaylen Brown, but in addition to his individual performance, the other takeaway was just how much the offense purred with all four of the Celtics best players healthy and contributing.

The numbers, which are made up by a small sample-size, don’t lie, and as the Celtics continue to take care of business it’s hard not to get giddy when thinking about the best case scenarios for this group.

Each of the Celtics top four players (as well as Marcus Smart) can run the offense from above the 3-point line, yet can also play off the ball. Each can make his own offense and yet can score within the flow of the Cs half-court offense.

The big concern is the lack of a top-tier big man to bang with the two best players in the east — Giannis and Joel Embiid, but given there’s no way to get one of those guys without messing with the team’s four wings or removing the team’s heartbeat in Smart, the Cs will lean into their strengths.

Right now, that’s leading to wins — against the bad teams and some good ones, too. Let the good times roll.

On page 2, Enes Kanter on the floor was a minor Christmas miracle

The solution came together fairly quickly this time. Kanter reached out to a friend he declined to identify, who clearly had the pull needed to get such a tricky situation past the finish line.

“Two days ago, I spoke to the Chief of Staff for the Minister of Immigration and then my friend reached out to Trudeau’s office and they said we’re all good,” said Kanter.

So when he stepped off the commercial jet the team chartered for this Christmas trip in order to squeeze on every family member imaginable, the anticipation started to finally hit.

The Athletic — With an assist from PM Justin Trudeau, Enes Kanter gets the greatest Christmas gift of all: Freedom

As someone who can move freely from country to country just by keeping my passport on me, I can’t imagine what it’s been like to be Enes Kanter. Kanter hasn’t been home to see family in years, and over the past couple of NBA seasons, hasn’t been able to join his team for international games.

There’s been loads of criticism levied at Kanter by Celtics Twitter over the course of this season. Some of it’s been warranted but much of it just seems to be unfairly piled on. Kanter can gobble up 18 rebounds and some folks see what they want to see — he’s ruining our spacing! he’s a sieve on defense! his interior passing sucks! Um, guys, we knew all of those things would be issues. So does Brad Stevens. That’s why he primarily uses Kanter in situations that are best for the team. He also cleans up on the offensive glass like no Celtics player I can remember. These critics were probably also the same dudes whining about the Cs rebounding in previous years.

I’m hoping those same critics can separate Enes Kanter the man from Enes Kanter the basketball player. What a relief it must have been for Kanter to know he could join his team without fear of reprisal. You don’t have to like him has a basketball player, but as a man, you should respect him, feel for him, and when it comes to yesterday, you should have been happy for him.

And finally, one, two or three Celtics all-stars?

Walker’s spot on the All-Star team should be safe. His counting numbers aren’t quite like what he posted in Charlotte, but he’s having the most efficient season of his career. His outside shooting has been ridiculous. He’s making 40.8 percent of his 3-pointers on more than nine attempts per game – only two others (Paul George and Devonte Graham) have managed that feat. Walker has been willing to step aside to let teammates flourish, but still drives the Celtics offense.

The Eastern Conference isn’t rich with superstars, but is thick with possible All-Stars. Jayson Tatum and Jaylen Brown deserve to be in the mix and Gordon Hayward would have built a strong case with a healthier start. Though Brown may be having a better season than Tatum, the guess here is that Tatum beats out his teammate because of his higher scoring average. Would that be fair? Don’t make me choose between two totally different players lifting up their team together. It’s just the way All-Star voting often goes.

Jay King has Jaylen Brown missing out on an all-star spot, with Tatum making the roster instead. We asked this question of our entire staff in the pre-season, with many of us picking Walker and Tatum. Jaylen is making it hard to leave him off the roster. I fear, though, that it will only be two Celtics on the team, and tend to agree with King that Brown will be left out.