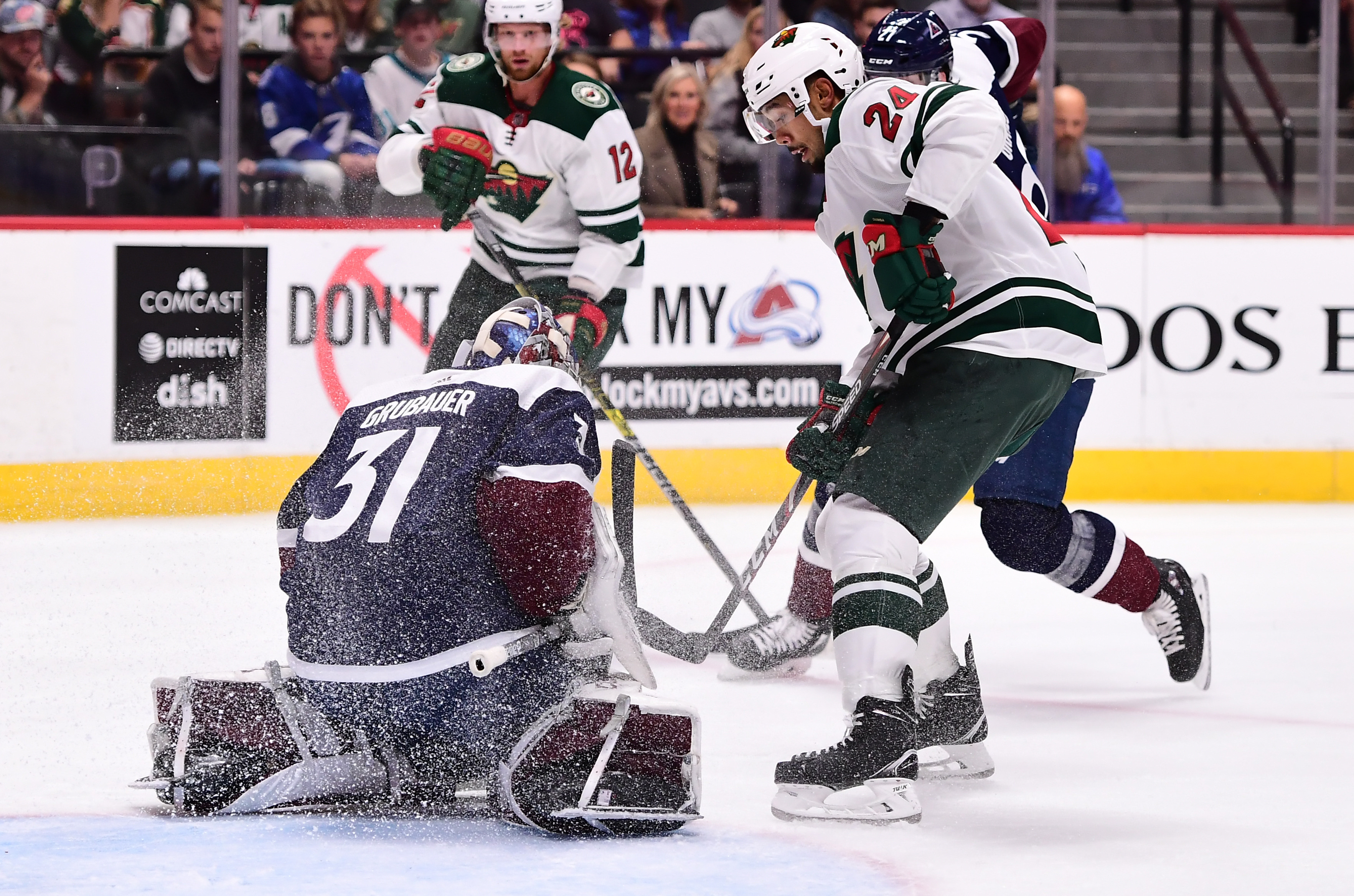 Happy Holidays and Merry Christmas to all of our readers out there.  We hope your holidays were time well-spent with your families and that it was filled with plenty of cheer.  The holidays also bring extra hockey as the NHL, as well as local high school teams pack them full of games to give people plenty more to cheer about.  I know as I visit family back in the Twin Cities I always take the opportunity to watch some high school hockey as well as take the chance to enjoy a Wild game or two with my family.

Minnesota has spent majority of its games on the road so this quick, one-game trip to Colorado should be small potatoes for them.  Yet, the truth is its an important game and while the Avalanche sit 2nd in the division the Wild are only 8 points behind them despite sitting in 6th place at the Christmas break.  Can the Wild make up some more ground with a road win tonight?

1st Period Thoughts:  For nearly 18 minutes, the Minnesota Wild outskated, outhustled and outcompeted the Colorado Avalanche in just about every statistical category and all of the intangibles that go with it.  Minnesota was winning most of the draws, the small races for pucks and applying timely pressure and not allowing Colorado to have almost any time and space to work with.  It was uncanny.  What was also noticeable early on was the fact the team was going to liberally use its bottom 2 lines more than one might expect.  The 3rd line of Jordan Greenway, Nico Sturm and Luke Kunin started the game followed up by the 4th line of Marcus Foligno, Victor Rask and Ryan Hartman then back to the 3rd line and another shift for the 4th line.  Minnesota wanted to set a blue collar, workman like tone early and it really gave the Avalanche a lot of problems.  When the Wild were in the offensive zone it was a no-nonsense approach, taking their opportunities to take the puck to the crease in search of goals.  Eric Staal would use his 6’4″ frame to protect the puck and he’d drive to the net, almost cashing in on two chances right near the blue paint that Pavel Francouz sprawled to keep out.  The Wild’s dogged persistence would be rewarded as a few other attempts to center the puck finally ended up working out to the point where Carson Soucy sent a wrist shot that beat a well-screened Francouz (thanks Nico Sturm).  1-0 Wild.

The @mnwild get the party started in Colorado. #MINvsCOL pic.twitter.com/AoTC4cNBVs

Minnesota did not let up.  Its relentless puck pressure continued to cause lots of confusion to the Avalanche who were not used to this kind of fast, relentless style of play from the Wild.  They’d add to their lead a few minutes later as a Kevin Fiala shot would trickle through Francouz and as the puck appeared to be sliding just wide it was jammed home by an alert Eric Staal to make it 2-0 Wild.

Everything seemed to be going the Wild’s way until about 3 minutes left in the period when Soucy was tagged with an extremely marginal ‘interference’ call on forcing a hard-charging Nathan MacKinnon towards the boards.  The Avalanche finally had the time and space they had been deprived the whole period and their confidence continued to build as they peppered Devan Dubnyk with shots.  Dubnyk was pretty solid on the penalty kill, making a number of quality saves.  But shortly after the killed penalty, the Avalanche would strike as a point shot by Ian Cole would be redirected perfectly by Dubnyk by Matt Calvert.  2-1 Wild.  But Colorado could sense the change in momentum and with the crowd behind them, Gabriel Landeskog would intercept a puck in the neutral zone and he’d turn on the jets and split Jonas Brodin and Soucy to then wrap a shot by Dubnyk who was too late to pounce on the puck.  2-2 game going into the 1st intermission and one that had to sting for the Wild when you consider they owned most about 90% of the period.  It just goes to show you how they cannot afford even a small lapse in their play, especially against a deep and dangerous squad like Colorado.

2nd Period Thoughts:  The 2nd period started off with Colorado dominating play.  The Avalanche were buzzing all over the Minnesota end of the ice and the Wild seemed to struggle as they tried to deal with Colorado’s superior team speed.  At times it nearly looked as though Colorado had a power play as Minnesota just didn’t seem to have the jump or the legs to stay with the Avalanche and you just felt at any moment dam was going to burst and Colorado would take the lead.  Dubnyk had to be sharp and after about 5 minutes into the period the Wild finally were able to work the puck out of their own zone and it was the 4th line that helped generate a little energy on the forecheck.  This improved play continued and Minnesota appeared to get away with a ‘too many men’ penalty as Jared Spurgeon skated onto the ice and played a puck and with Avalanche players complaining about the non-call he’d send a pass to Ryan Suter.  Suter immediately recognized the Avalanche were distracted and he would skate into the Colorado zone and drop a pass back to Joel Eriksson Ek who let go a slap shot that beat Francouz short side, 3-2 Wild…or was it?

GOAL. Joel Eriksson Ek snipes one past Francouz to give Minnesota the lead.

Hold the phone. This one might be overturned for offside. pic.twitter.com/3uMXSHREzi

Despite the fact the fans were mostly mad about the missed ‘too many men’ call, the goal ended up being disallowed because the play was determined to be offsides as Suter entered the zone before Foligno could skate out of the zone.  Yet the replays shown were not entirely conclusive since you couldn’t see the puck but the officials agreed anyways and it was ruled a ‘no goal.’  The ‘no goal’ call certainly seemed to annoy Eriksson Ek who charged into the Colorado zone and he crushed Ryan Graves with a big check below the goal line.  Minnesota continued to swarm and they’d draw their first power play of the game as Graves cross-checked Zach Parise.  Minnesota had decent pressure during the power play but just couldn’t get one by Francouz who had a few close calls.  Minnesota would take the lead back a little while later as Brad Hunt let go of a slap shot that beat a well-screened Francouz.  3-2 Wild

Jordan Greenway with the screen in front. Doesn't look like he redirected Hunt's shot. pic.twitter.com/WtpSqHbXcr

Despite some solid play at both ends of the ice, the last minute proved to be a killer for the Wild as they’d give up a momentum killing goal.  This time it was a slap pass by Cale Makar that was redirected off the skate of MacKinnon and by Dubnyk.  Dubnyk wanted it checked for a kicking motion but the officials didn’t care and the goal stood and the Wild would go into the 3rd period tied at 3-3.

I thought MacKinnon’s goal looked a bit ‘iffy’ but replays were not going to be Minnesota’s friend tonight.

3rd Period Thoughts:  The Avalanche would again pick up where they left off in the 3rd with lots of confidence and momentum and they’d take the lead a little over a minute into the period as a Pierre-Edouard Bellemare shot was redirected by Calvert and by Dubnyk after some sloppy passing by the Wild that led to a turnover in their own end.  4-3 Colorado.  Minnesota could’ve just folded, but instead they returned to their puck pressuring style of play and they started to force some turnovers.  The Wild would tie the game up about mid-way through the period as a point shot by Brodin would be stopped by Francouz but Mats Zuccarello would play the puck with his skate and kick it up to his stick to tap home the rebound.  4-4 game.  You could sense the Wild believed they could win and they continued to outwork Colorado for loose pucks and limiting the Avalanche’s offensive chances.  A turnover in the neutral zone by Victor Rask had the 4th line center moving in and he’d let go of a wrist shot that beat Francouz far side and it rang off the right post and in.  5-4 Wild to stunned silence from the home crowd.  When you consider how Minnesota had given up leads late in the period the home crowd certainly were counting on their team rallying back once again.  Yet Minnesota was all business down the stretch, winning faceoffs, working pucks deep in the Colorado zone and the Avalanche struggled to create many chances in the last few minutes.  With a little under 2 minutes left, the Avalanche would pull Francouz for an extra attacker but the Wild would not allow Colorado to build any momentum offensively.  Another clean faceoff win, this time by Eriksson Ek who worked the puck back to Suter who quickly fired a shot down the ice to bury an empty netter and he sealed a 6-4 victory.

It was an impressive game on a number of levels.  Minnesota’s spread of scoring and the fact that all 4 lines were contributing to the victory.  I was especially impressed with the play of Nico Sturm who was terrific defensively and using his big body to deprive Francouz a good view of the puck.  But perhaps even more impressively, was his excellent performance on his draws, consistently winning them down the stretch of this game and a big reason the team ended up with a victory.

C – Alexander Khovanov (Team Russia, WJC) ~ the skilled Russian is getting a chance to shine on an international stage as he tries to help his nation win gold.  Khovanov had an assist on 2 shots in Russia’s 4-3 loss to Czech Republic on Thursday.