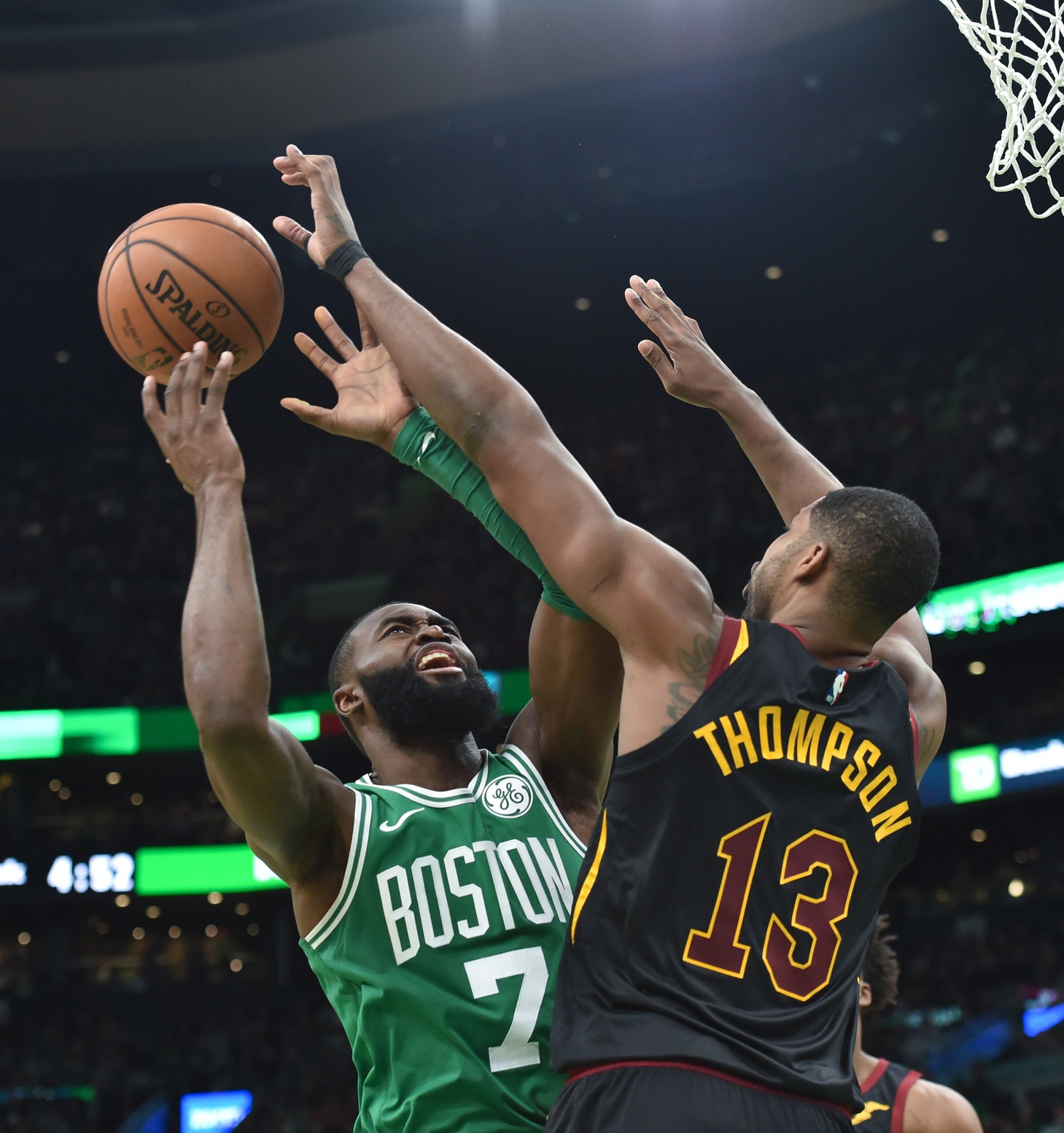 Yesterday’s contest was a dominant win in all senses, albeit against a miserable opponent. Granular, we shall get:

Jayson Tatum destroyed everyone who guarded him.
On the whole, we know the Cavs’ team defense is wretched, and Tatum exploited its individual player-to-player wretchedness to marvelous effect:

Jayson Tatum has taken advantage of repeatedly getting Collin Sexton and Darius Garland guarding him defensively to get hot, and now he’s torching the Cavs. Up to 24 points on 9-13 shooting & it’s still late on the second quarter. Kevin Love, meanwhile, is up to 19. C’s up 58-43.

As Bontemps noted above, the Cavaliers guards kept getting switched onto Tatum instead of forwards who maybe could’ve done a better job—wait who am I kidding Kevin Love and Cedi Osman were playing those positions. And the results, especially in the first half, exemplified how a couple of bad decisions on defense snowball into catastrophe. Much to Tatum’s and the Celtics’ advantage, in this case.

More generally, the Jays had their best game ever.
Insert obligatory “it was against the Cavs” caveat here, but…

64 points is the most combined points ever for Jaylen Brown and Jayson Tatum.
6 of their highest 8 combined points games have come this month. pic.twitter.com/SzaJuMYvty

Also, per ESPN's Stats and Information Group, this is the first time two Celtics 23 and under have both scored 30 in a game since Antoine Walker and Paul Pierce did it on March 13, 2000. https://t.co/oxbuESD2ah

Aside from this high-water mark of an offensive performance, it makes me think this is officially What We Can Expect From Jaylen and Jayson Now.

Tatum isn’t always going to shoot above 50% as he did in that game, nor does he have to. And Brown may not keep his current ranking in the top 20 for field-goal percentage on the season (he is no. 20, at 52%, and the only wing player in that group; the rest are bigs unless you count Ben Simmons, who plays point at the size of a big, as a wing).

But! At the volume Tatum shoots, which likely won’t change and probably shouldn’t, if he brings his FG% just a bit above its current 42%—to, let’s say, 45%—he could vault into the company of the league’s 20 or even 15 best scorers. Brown, meanwhile, shoots less and picks his spots more carefully, so he certainly could retain his current level of efficiency while still scoring 20 per game. And if this is what the Jays are capable of in years 4 and 3, imagining their Actual Primes is goddamn staggering.

KanterWatch update: Pretty good, actually!
Enes Kanter had his usual efficient numbers in yesterday’s game: 14-9-3-2-2 on 70% shooting with no turnovers. But he gets a laudatory notice in this collection of thoughts because he legitimately played good defense. While this was, as noted, against an awful team, one of its few competent players is center Tristan Thompson—a man who’s historically ruined the Celtics’ lives on the glass, in fact—and Kanter acquitted himself well against that challenge.

I used the above clip in our Rapid Recap as well, but it perfectly illustrates what I’m talking about. Kanter absorbs contact from Thompson’s drive attempt, has his hands all over the place resulting in a steal and then spins Thompson like a top on the other end for an easy hook layup.

Honestly, that’s all the effort Kanter has to give for him to undo a fair portion of the smack-talk he’s received from Celtics fans, myself included. No one’s expecting him to suddenly be Rudy Gobert. Being as effective as say, Aron Baynes, would be just fine. And he was certainly on that level in this last game.

I don’t know what to make of Romeo Langford.
Nor do I necessarily think I need to know this yet, as he’s barely had any playing time with the big club this season due to a series of rotten-luck injuries. He’s healthy now, and if he was going to get a green light to try out his offense, yesterday’s game was definitely the moment for it. It didn’t really turn out that way, because he took only one shot, a corner three, and missed. But he ended up showing out on the other end:

Romeo Langford with the nice blocked shot for the #Celtics, figuring out the best way for him to contribute for this team, for now at least, has to be with his defense.

In his few minutes against the Raptors, I thought he seemed dazed on defense. Not so here, where he not only had that massive swat of Osman’s layup attempt but kept up with coverage assignments no matter how things moved while he was on the floor. Too small a sample size to make major conclusions, of course, but good signs.

Watching the Cavaliers takes years off viewers’ lives.
The Cavs are a repository of sadness. The Celtics have played them three times this season…and have ONE MORE GAME LEFT AGAINST THEM AAAAUUUUGGGGGHHHHHH. Thankfully it’s not until March.

I can’t even imagine what it’s like to root for this team in its current iteration. I’d feel a lot worse if they hadn’t also gotten two stints of LeBron James, one of which came with the most thrillingly sports-movie championship series win of the last 20 years. And if their existence didn’t mean I had to watch them sometimes.

Unfortunately it does. So my pity has limits.

Fight of the Day: Junichi Sawayashiki vs. Peter Aerts