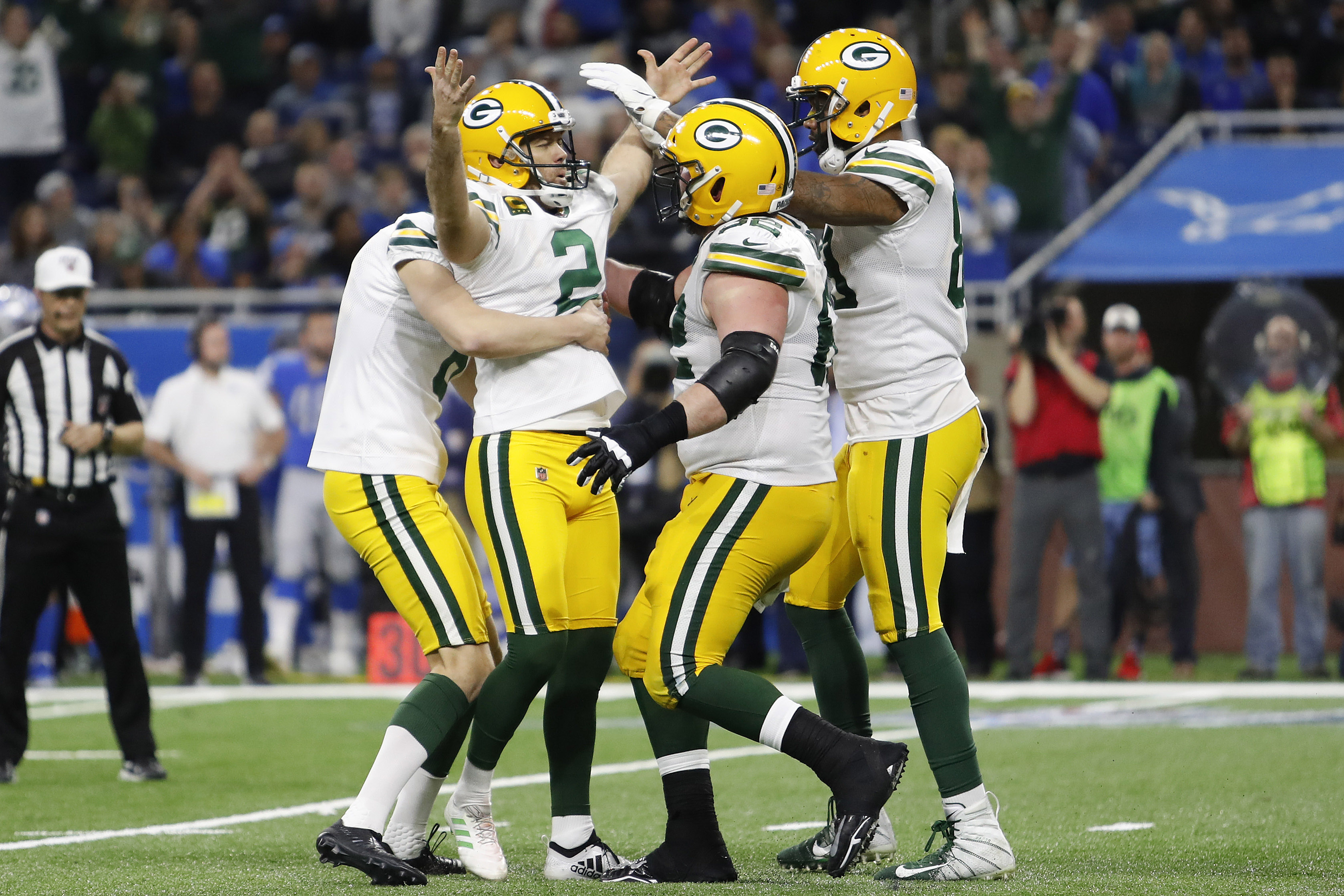 The Green Bay Packers finished their regular season with a 23-20 win over the Lions in Detroit. With the victory, the Packers finished with a 13-3-0 record and clinched a first-round bye in this year’s playoffs.

Aaron Rodgers threw for 323 yards and two touchdowns while Aaron Jones gained 100 yards rushing and 143 total yards from scrimmage in the win.

Mason Crosby kicked a field goal as time expired to give the Packers the victory.

Here are 10 things we learned from the Packers win in Detroit:

1. Aaron Rodgers Is Off

Something is not right with Aaron Rodgers. His accuracy is simply off and he had a lot of trouble connecting on any passes downfield against the Lions.

For the game, Rodgers completed just 49.1 percent of his passes, the second time in the last three games that he completed fewer than half his throws.

On many plays, Rodgers’ throws were just a hair off, either too far ahead of the receiver or a bit behind him. Either way, Rodgers was very inconsistent despite facing the NFL’s lowest-rated pass defense who was playing without their best cornerback (Darius Slay) for significant portions of the game.

The Packers can beat the Lions with a subpar Rodgers, but in the playoffs, they will need their quarterback at his best.

2. The Team Came Out Flat

Although there was so much on the line, the Packers did not come out ready to play this game. In the days leading up to the game, head coach Matt LaFleur said this was a playoff game for his team. If so, they didn’t come out with any of the intensity needed to dominate it.

The Saints were in a similar, must-win situation if they wanted to earn a first-round bye. They were playing a slumping team on the road that had nothing to play for. The Saints came out and took care of business, taking a big lead early en route to an easy 42-10 win over the Panthers.

The Packers don’t have a lot of players with extensive playoff experience on their roster, but they will need to show up prepared in two weeks if they hope to have any success in the postseason.

Jones should have had more receiving yards, but Rodgers kept missing him every time he tried to throw downfield and he almost got his star running back hurt when he tried to dive or extend for inaccurate passes.

Jones finishes the season with 1,084 rushing yards and becomes the first Packers back to go over 1,000 yards in a season since Eddie Lacy in 2014.

Jones did not score a touchdown, so he fell one shy of his quest to tie Ahman Green’s single-season franchise record for touchdowns.

The last thing the Packers needed were injuries and yet they had a few of them in this game. Center Corey Linsley left early in the game when his back injury flared up. He was replaced by Lucas Patrick who did a serviceable job replacing him.

Right tackle Bryan Bulaga also left the game with a possible concussion. Bulaga was replaced by the recently acquired Jared Valdheer who also did a solid job for the rest of the game.

The Packers also got a scare when Aaron Jones came out of the game after diving for a poorly thrown ball by Rodgers, but Jones was able to return to action.

In the third quarter, the Packers got back into the game by utilizing short, quick release passes. Rodgers was having difficulty throwing the ball downfield, so LaFleur turned to quicker passes and the result was a 12-play, 95-yard drive for a touchdown, followed by a 12-play, 51-yard drive that resulted in a 40-yard field goal by Mason Crosby.

After those two drives, however, the Packers got away from the short passing game and again resumed trying to throw the ball downfield.

The Packers need to limit their attempts at deep passes right now until Rodgers shows he has regained his accuracy and touch.

6. The Defense Came Up Big Late

The Packers defense came up big in the fourth quarter when the offense sputtered. Blake Martinez’s big interception was a momentum changer that got the Packers back even with the Lions when the Pack cashed in on the ensuing drive with a touchdown pass to Alan Lazard.

Martinez also had the Packers only official sack of the game which came in the fourth quarter when the Packers defense desperately needed to make a stop.

The defense wasn’t outstanding in the first half, but when they had little margin for error in the second half, they came up with several key stops that kept the team in the game.

Overall, the Lions gained only 305 total yards for the game and were just 3-of-12 on third down conversions.

The defense wasn’t dominant, but they got the job done when it counted most.

Davante Adams led the Pack with seven catches for 93 yards and a touchdown. Had Rodgers been more accurate, those numbers would have been even better.

Adams finished the season just three yards shy of 1,000 for the season, which is not bad when you consider he missed four full games and part of another due to his turf toe injury.

He remains the Packers top receiving weapon and Rodgers trusts him far more than any other option among his pass catchers.

8. Allen Lazard Has Established Himself as WR2

Lazard again had some strong plays in this game including the 28-yard touchdown catch that tied the game.

There is no doubt Lazard is now WR2. Lazard finished the game with four catches for 69 yards and the touchdown.

Rodgers looks for Lazard on key third downs when Adams is covered. The other wide receivers did not make much of an impact catching the ball with Marquez Valdes-Scantling catching only two passes for 19 yards despite getting seven targets, Geronimo Allison made three catches for just 17 yards and Jake Kumerow had one grab for seven yards.

The Packers kicker beat the Lions for the second time this year with a field goal on the final play of the game. Yes, he missed a field goal earlier in the game, but it was from 51 yards out and it was only his second miss of the season.

Crosby should be a big asset for the Packers especially if there’s bad weather at Lambeau in two weeks.

10. Winning Ugly Is the Packers Identity This Season

It’s almost never been pretty, but the Packers finished the season with 13 wins with a rookie coach implementing a new offensive system.

Nothing comes easy for this team, but they fight and work and claw their way to victories on a consistent basis.

Regardless of what happens in the playoffs, this season was a huge step forward for the Packers won matched their win total for the previous two years combined this season.