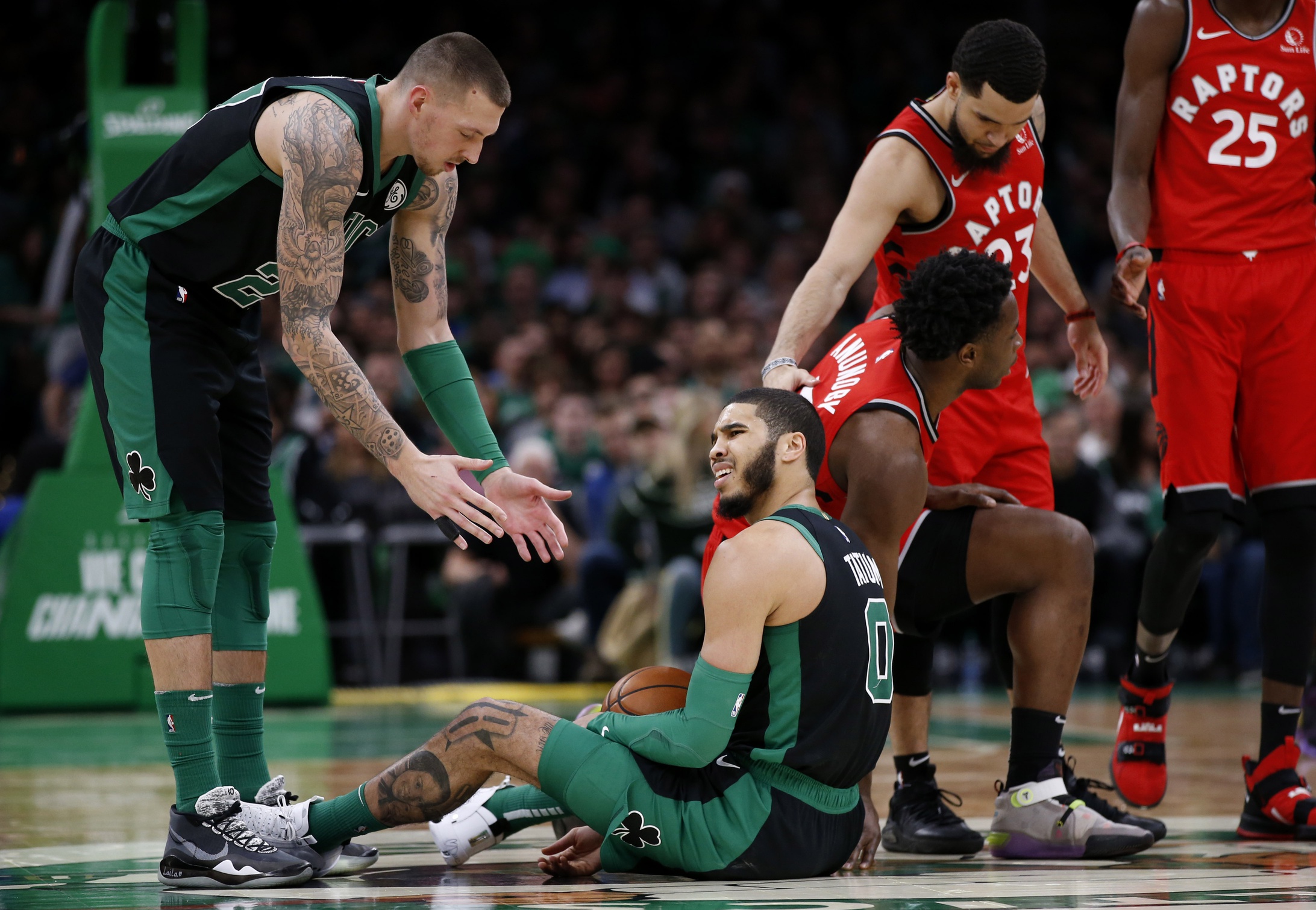 After a 113-97 loss to the Pascal Siakam-less Toronto Raptors on Saturday night, the first question on everyone’s minds is quite simple: What in the world happened? The Celtics never found a rhythm and every time it seemed like they’d pull back into it, the Raptors slammed the door shut with effort, hustle, and big shots.

You could attribute the defeat to fatigue, in a third game in four nights, but there is a deeper issue that needs to be addressed. The Celtics are going to have to win consistently on nights when the offense isn’t clicking, and Saturday was one.

The Celtics shot 32.5 percent in the second half. They missed layups, open 3-pointers, putbacks at the rim, and midrange shots. They were dominated because the Eastern Conference is deep, by even a shorthanded Toronto club missing two starters — including an All-Star candidate — and its sixth man (Siakam, Marc Gasol, and Norman Powell).

It was an effort from Toronto that felt eerily similar to a lot of Celtic wins this season. They grinded it out on both ends of the floor and gave the Celtics everything they had until the green ultimately folded late. The theme of this season has basically been “Everything is Awesome” so this was a reality check they may have needed. While Kemba Walker dazzled with 30 points, the rest of the Celtics struggled mightily offensively. Jayson Tatum, Jaylen Brown, and Gordon Hayward combined for an abysmal 11-32 from the floor in what was a humbling game for the Jays after scorching earth the last few games. The shots were there, they just were not falling, especially from downtown. For a team who shoots the three ball at a 35.6% clip, 7-32 isn’t going to cut it.

“We missed a lot of easy ones just because of the intensity of the game, I think we were a little bit excited,” Brown said. “We gotta learn from it. We’re a young team. You see tonight, Toronto just raised their level of intensity and we weren’t ready. We didn’t handle it. We’ve got to adapt to it and we’ve got to be more physical with the basketball.”

What was even more eye opening than the missed shots was the rebounding and hustle stats.

There are going to be clunkers like this, but the Celtics had ensured since the opener they would play hard every minute, especially defensively. The Raptors were not only flawless in every aspect; they played harder than the Celtics, with a 53-31 rebound edge. Toronto outscored Boston, 23-5, in second-chance points.

You can throw away the rest of the stat sheet and look at these singular stats to get the real story of the game. On top of the rebounds and second chance points, the Celtics got out-rebounded 15-7 on the offensive glass. The rebounding battle/hustle game is empirical to winning in this league and the Celtics got a taste of that last night. They let Serge Ibaka (20 points and 10 rebounds) run an absolute muck in the paint and no matter who they threw on him, they had no answers. It was a house of horrors down low and the Celtics didn’t have a recipe to stop it.

The offense has been humming all season long so the Celtics really haven’t had to bear down and win a game like this too often. While a loss is never a good thing, it’s valuable for them to see what happens when they take their foot off the gas pedal for just a second. I don’t know about them, but I certainly saw both Fred VanVleet and Kyle Lowry in my nightmares raining threes at an alarming clip (9-19 combined). Those are the type of efforts they’re going to have to fend off to make a deep playoff run and these are the type of matchups that could come in a crucial playoff game down the line when the shots aren’t falling (think Game 7 vs. Cleveland in 2018).

Brad Stevens echoed this sentiment in the post-game that even though they’ve done well, they’re still not where they need to be as a team.

“We’ve got a lot of work to do to be the best version of ourselves,” coach Brad Stevens said. “I don’t think tonight was as much about us. They deserve a lot of praise. They came in here and set the tone for how the game was going to be played. It looked like the people that were the last team standing last year.”

All in all, it was a poor effort, but a good lesson for a team that has far more important games down the line than one on the second night of a back to back in December.

Page 2: Where Marcus Smart feels blessed to be back on the battlefield

Marcus Smart still needs medication for his eyes, but the steroid drops only need to be taken twice a day instead of four, so he’s making progress as he recovers from a double eye infection.

“It’s still a little blurry, my eyes are still really dry. And so, it takes a little longer for me to adjust, but for the most part it was good,” Smart said after his return to the Boston Celtics lineup. “It didn’t really affect my play on the court, which is good, so I can deal with it. But it is a little sensitive to the light.”

“You understand what your eyes mean to you, but it’s different when you have to go through something like I did, where it’s a possibility you could have lost your eyesight,” Smart said. “It puts things back into perspective for you and humbles you a little bit. Not saying that I wasn’t, but it just kinda reiterated things for me that I’m blessed to be out here and blessed to be in this organization with this group of guys. It felt really good and I’m glad to be back.

The fact that Marcus Smart was on the court last night made me a tad bit ignorant to what was happening on the floor. He took a few charges, made a few big plays, and brought his usual energy that we’re used to on a given night.

Marcus Smart hits the 👌 at the 🚨!#Celtics pic.twitter.com/7omXx8LjNs

He looked a little rusty (2-9 from the floor) and definitely wasn’t given any favors with his minutes’ restriction, but it was great to see him back out there. There’s a different energy to this team when he’s on the floor and even in a game like this where things felt bleak, he always instills a bit of hope that they can come back.

Now hopefully this team can stay relatively healthy after having Kemba Walker, Gordon Hayward, and Marcus Smart all available for the first time since November 9th.

Boston Herald: Toronto extracts a pound of payback from the Celtics