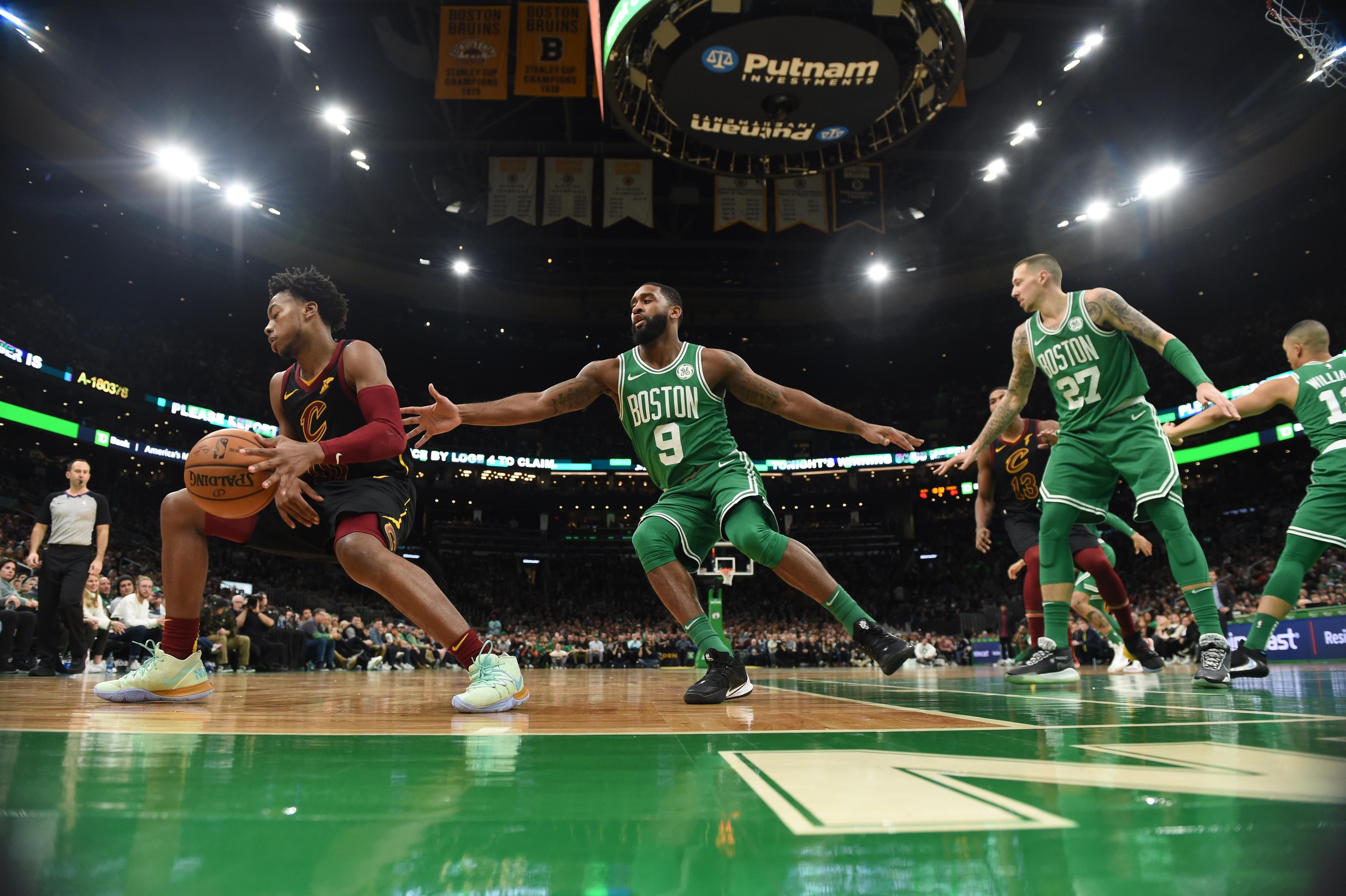 Indeed, the Celtics will be crisscrossing the country more than usual in January, playing a season-high 16 games this month that while logging more than 9,000 miles of air travel along the way.

And while nine of those games are at the TD Garden, five come immediately after being on the road, which, players will tell you for their bodies at least, makes those games similar to playing on the road even though they’ll be in the friendly confines of the Garden.

Because of the road-heavy slate of games coming up, coach Brad Stevens knows an element of creativity is a must for his team to stay as fresh as possible.

There will be only a handful of opportunities to practice this month, opportunities in which Stevens will look to get as much accomplished in as little time as possible knowing the importance of limiting the wear and tear on his players beyond what they’ll endure in games.

NBCSports Boston — Celtics schedule gets challenging with a travel-filled January

The Boston Celtics didn’t play last night, January 1st and they don’t play tonight, January 2nd. I don’t know about you all, but I call bullshit on A. Sherrod telling me the Celtics are playing a lot this month.

Ah, but if you look ahead on the calendar a bit, the man is telling the truth. The Celtics play a bunch this month, and it makes sense — the 23-8 Cs have played 5 fewer games than the 31-5 Milwaukee Bucks to this point. That’s about to change.

While 16 games in a month, with a handful of back-to-backs and plenty of time on the road, could spell a slippage in the Celtics impressive record, January actually won’t be the most difficult month of the season for Brad’s guys.

Of the 16 games the Celtics play this month, only four are against teams with winning records (Philly, Milwaukee, the Lakers, and Heat). Now, those are four of the best teams in the Association, and it’s one of those years where the haves and have nots are clearly defined, resulting in fewer .500+ teams, but 12 games against the dregs of the league should help the Cs pile up some Ws.

It’s February that looks like the toughest month of the season for the Celtics. 12 games in 29 days, 7 of which come against teams with .500+ records, and 6 of 7 on the road with the All-Star Game in between.

But back to January, get ready for a lot of Mike/Tommy/Scal/Abby, a lot of DNP-Load Management a lot of Bulls and Pelicans (both those teams show up twice) and perhaps a lot of Tacko and Tremont as the Celtics try to keep guys fresh.

On page 2, Jaylen is recognized for great community work

Brown’s work, both individually and through his Juice Foundation, was recognized by Sen. Collins today, especially Browns work with “No Books No Ball” and the Boys and Girls Club of Boston. “No Books No Ball” was established in 1991, and its stated goal is to use academics, basketball, and community engagement to motivate urban youth and empower families, individuals & communities.

“Just by using my platform, being an athlete, a basketball player, I think has a lot of influence,” Brown said. I’m just trying to use it in a positive manner.”

Such a cool honor for Jaylen who, at a young age and in a short amount of time in Boston, has ingrained himself in the fabric of the community and made the city a better place for kids.

It was non-basketball pursuits such as these that allegedly made teams wary of drafting Brown too high in the 2016 NBA draft. Those concerns are ridiculous and regressive on their face and even more so four years later — as Brown takes off as a player and continues to do good in the community.

I’m glad JB and his mother (quoted by John in the story) were able to get the time needed during the season to be recognized and appreciated for this work.

In every elevator shaft, every room, Stern was a force of nature. For all the volatility and blunt force, there was an incredibly progressive, generous and compassionate side to Stern. The NBA played a leading role in HIV and AIDS awareness. Stern refused to let the league become overrun with irrational fears in the wake of Magic Johnson’s diagnosis in 1991. Minorities and women were elevated into prominent positions in larger numbers and greater frequency than in other professional leagues.

There are stories of NBA employees with family crises that credit Stern with remarkable acts of kindness and generosity. In his pre-NBA days as an attorney, Stern took on and won a massive housing discrimination case for African Americans in Northern New Jersey, and did so pro bono.

Stern was a Jersey kid with a Rutgers degree and Manhattan law firm ambitions. In the NBA, he found the mechanism to expand his world far beyond the George Washington Bridge and Lincoln Tunnel. As commissioner, transcendent NBA stars became global icons — and inspired the imagination of young players everywhere.

As a product of the 80s, whose love for basketball blossomed in the early 90s, David Stern’s NBA is the NBA I grew up on. For better or worse — from Jordan’s reign to those sort of undefined years of the early 2000s, to the growing of the game internationally, the NBA has been my favorite world, my favorite escape for my entire life, and while I didn’t really understand who Stern was early on, his leadership got the game to this place I love so much.

In reading tweets and reflections in the past 24 hours, one thing is certainly clear: Stern was respected, but he was absolutely feared. There’s a lot about his legacy that will last for generations, but one of his smartest decisions, as he left his post, was to groom Adam Silver and tab him as the next commissioner. Silver seems to rule with less of an iron fist but by no means is it less steady.

The league lost an icon yesterday.

And finally, signing off after 5+ years

On a personal note, this morning marks my final Dump after 5 years and about 2 months with Red’s Army. It’s possible I’ll be back one day, but our first child is due any day now and life is about to look pretty different.

I wrote for my high school and college newspaper back in the 00s and called games on TV and radio during that time as well. For the first five years after college, I felt a void left by an absence of talking and writing about sports. I itched for the opportunity, but didn’t know where to find it, and was too busy trying to figure out what the heck to do with my life to look too hard.

I spent the first five years of my post-grad life outside of Boston, and whenever I wanted the fan’s perspective on my favorite team I went to Red’s Army. When John and Chuck posted stating they were looking for new writers in the fall of 2014, I jumped at the chance.

In the fall of 2014, I was living with some buddies in Brighton and started sending my early posts on this site to a girl I had just started dating (that’s a bold strategy, Cotton, let’s see if it pays off for him). She pretended to like basketball and even read my posts each week, asking questions as she went. I liked her, so I didn’t care that she was only feigning interest.

That woman is upstairs in our house as I write this because, as context clues probably helped you guess, she is my wife now (she doesn’t read my posts anymore and you know, I’m actually ok with it). Our lives have changed significantly since I published my first post, but one thing that didn’t change was signing on each week to write.

A lot has changed for the Celtics in that timeframe, too. A young team without much of an identity heading into Brad Stevens’ second season went from looking like a lottery squad, to the eighth seed in the playoffs that next spring, thanks to Isaiah Thomas. The Celtics have had a few wild summers in free agency, two trips to the Eastern Conference Finals and one of the more disappointing seasons in recent memory. It’s been so much fun to share my two cents on it all.

I’ve loved every minute of being on the Red’s Army staff. It’s brought back that joy that writing about sports provided me in high school and college, it’s reconnected me with the city in which I grew up, and it’s brought me even closer with my favorite team.

Maybe I’ll be back and writing with the guys here one day, but for now, in between bottle feedings and trying to grab sleep, I’ll read each morning’s Dump to stay connected.

Thanks to all those who have read my Dumps for the last five years and see you all around. Go Cs!

(You can stay in touch with me through twitter @bmark86)