Grand Forks, ND – What a difference a year makes.

A year ago, the University of North Dakota hockey team returned from Buffalo, New York empty-handed after losing a pair of non-conference games to Canisius College. This non-conference debacle torpedoed any hope, UND had of making the NCAA tourney. The Fighting Hawks returned to Grand Forks post-Canisius disaster with a 9-9-1 record looking for answers.

The Hawks never found the right answer. UND was bounced in the first round of the NCHC playoffs. They missed the conference finals for the first time since 2002. Finally, for the second straight year, they were on the outside looking in during the NCAA playoffs..

When it was all said and done, the results of the 2018-19 season didn’t sit well with the fan base. The Hawks spent the offseason doing some soul searching and working hard. The results of that work are evident now.

Fast forward to this season. The Hawks have vaulted to the top of the college hockey world. They sit on top of the NCHC standings with a 7-0-1 securing 23-of-24 possible points. The Hawks also sit atop of the Pairwise rankings with a 16-1-2 (.894) record. For comparison said, UND won 18 games in all of 2018-19. Yes, there’s lots of hockey left, but it’s hard for UND fans not to feel just a little bit giddy.

Yes. What a difference a year makes.

On Saturday, UND completed an important two-game, non-conference sweep of Alabama-Huntsville, with a series-clinching 5-2 win. If they’d lost either game, it would’ve had cataclysmic effects on their Pairwise Rankings.

With Saturday’s win, UND set a record for most consecutive wins at Ralph Engelstad Arena, 13. Checking UND’s schedule, they have 16 games remaining. Eight games at home, and eight games on the road.

Post-game, I was talking to Hall of Fame sportswriter Virg Foss and I said both games eerily mirrored each other. Both games were a war, the Chargers keep at it and didn’t go away quietly into the night. Both games were close until the Hawks broke the game open with a pair of goals in the third period. Both games ended with the Hawks scoring an empty-net goal. The end results both nights was 5-2 both nights.

History in the making X2

During the pre-game, Foss was honored for his years of service to UND hockey. I’ve gotten to know Foss over the last eight seasons and he’s a treasure. I’ve told him he should write a book about his UND hockey memories. I’ve heard some of Foss’s stories and they’re priceless.

This weekend, the Grant Mismash (2g-1a–3pts), Collin Adams (1g-4a–5pts), and Jordan Kawaguchi (4g-0a–4pts) line remained red-hot scoring (7g-5a–12pts), they were also a plus-12 on the weekend. Speaking of red-hot, Kawaguchi scored a highlight goal worthy of an ESPY. Well, maybe not an ESPY, but I would be shocked if it’s not the NCHC goal of the year. On Saturday night, Kawaguchi’s goal made ESPN Sports Center highlights and checked in at number three. You can admire the goal below.

With two goals on Saturday night, Kawaguchi surpassed his career-high in points with 28. Moving forward he’s got at least 18 games remaining (counting 16 regular-season games and at least two NCHC playoff games). Realistically, there’s a chance (if he remains on his current pace and healthy) he could go over 100 points for his career this season. With his current play, he’s going to be in the running for the Hobey Baker Memorial Award. Hashtag #HobeyGuchi and or #Kawahobey

Are they Worthy of a Name?

Over the years, UND’s top lines have been given names. In 2015-16, the forward line of Drake Caggiula, Brock Boeser and Nick Schmaltz was affectionately named the CBS line. They racked up an amazing 63 goals and 157 points. They were also an eyepopping plus-135.

This season, the forward line of Mismash, Adams, and Kawaguchi (24 goals and 59 points) are turning heads and getting some ink and recognition. While this line might not be as talented or as prolific as the CBS line, but they’ve led UND to the second-highest goal total to date in the NCAA. Does this line deserve a name?

(Originally posted at Inside Hockey) 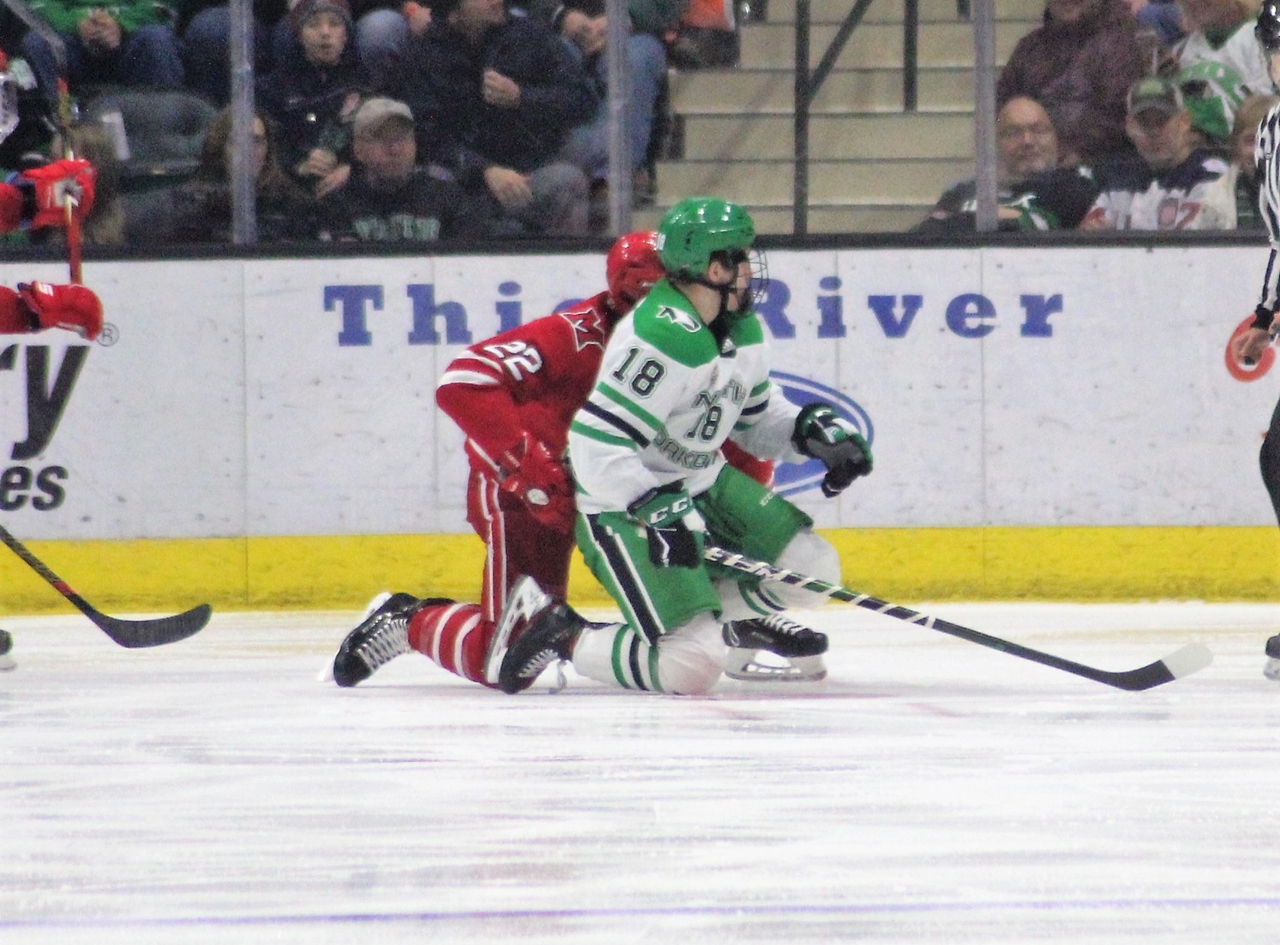 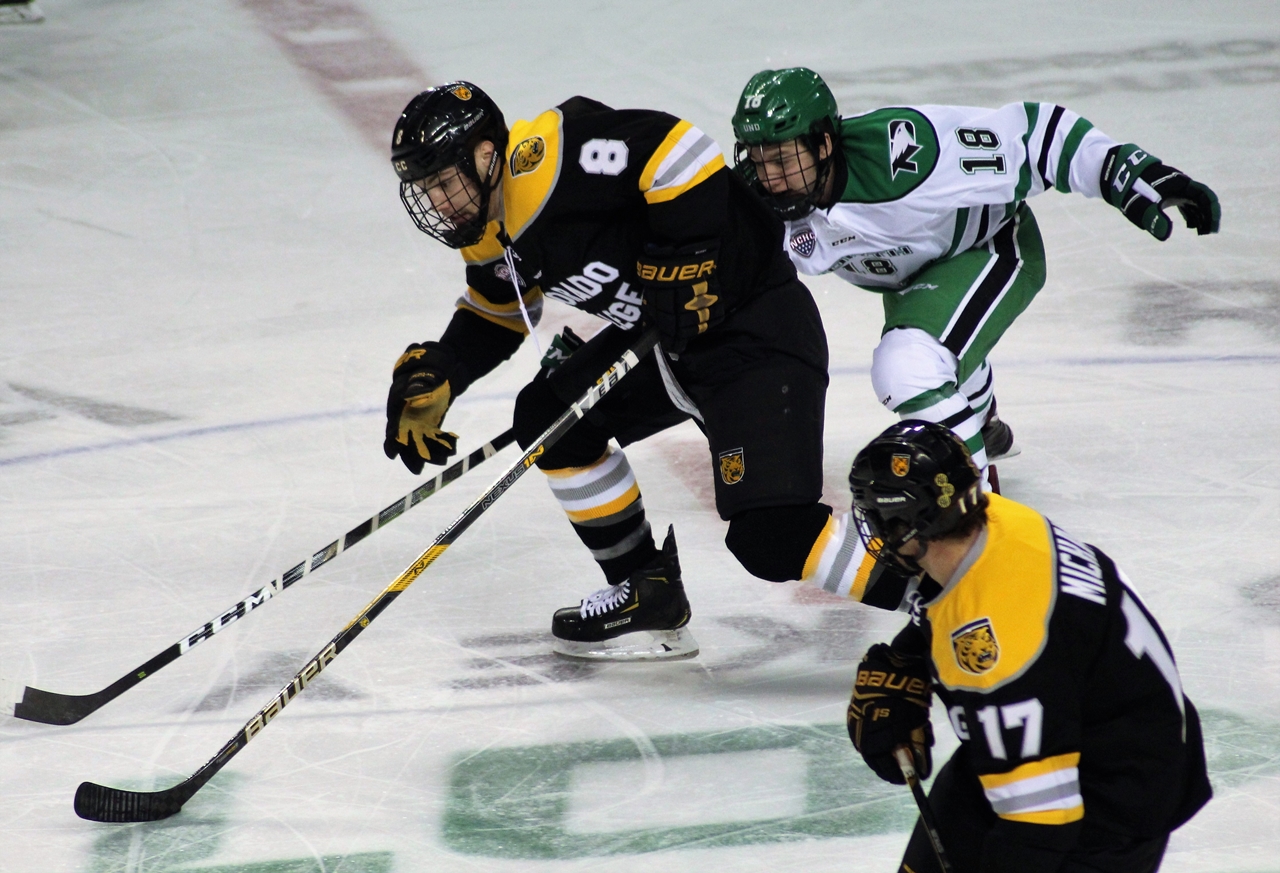 UND Travels to Colorado Springs to Take on Tigers