Rapid Recap: Kemba returns, but not for long, as Celtics lose to Spurs amid controversy 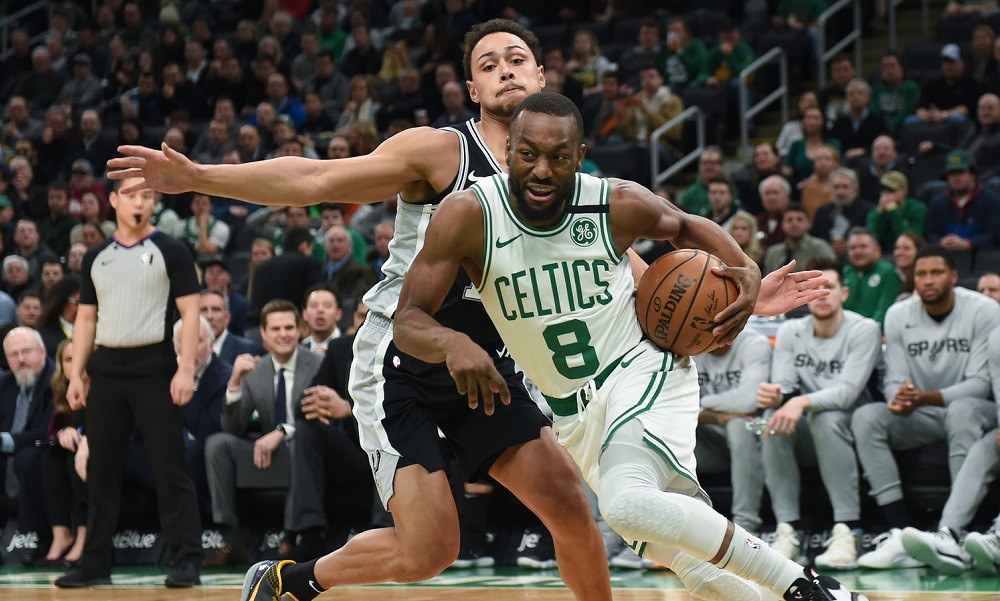 Rapid Recap: Kemba returns, but not for long, as Celtics lose to Spurs amid controversy

The Celtics’ recent first-quarter problems continued tonight as the San Antonio Spurs scored the first 8 points and never looked back, winning easily, 129-114. For the second straight game, Boston spent 48 frustrating minutes without having a lead at any time.

However, this game wasn’t that simple.

Kemba Walker, who returned to the starting lineup after missing three games with illness, was ejected by a young referee who, it must be said, overreacted.

Kemba Walker has been ejected from game vs. Spurs 🤦 pic.twitter.com/cXCXaRaiAO

This all happened when the Celtics were surging in the third quarter, having cut a large San Antonio lead to 7 points while the Garden crowd was going wild.

But let’s start at the beginning. For the fourth straight game, Boston was horrible in the first quarter.

We are the worst first five minute team in the world

Two and a minutes in, Celtics get their first field goal so bench guys can sit…

The Spurs led by as many as 19 before the Celtics recovered slightly.

Back-to-back Jayson Tatum buckets to end the first quarter have the Spurs leading 34-22 after one. San Antonio shot 64 percent (16-for-25) and had nine of the 10 players it put in the game score. Marcus Smart had 8 to lead the Celtics.

Tacko is on the floor. Going head to head against Poeltl in his first meaningful NBA minutes.

The Celtics have a lineup of Kemba Walker-Brad Wanamaker-Marcus Smart-Grant Williams-Tacko Fall on the court. I did not expect to see this two minutes into the second quarter.

Tacko had a rebound and a steal in his 5 minutes. (He played later as well and finished with 4 points.)

Tacko was not great, but he was not bad in meaningful minutes. Set decent picks & he was a little bit of a deterrent. I think it's obvious he can't be counted on for extended time, though.

This is the Celtics' first 20-point deficit of the year. The last team to lead the Celtics by 20 (in the regular season) and hang on to win?

Three minutes into the third quarter:

Spurs shooting 59 percent from the field so far. Season-high for a C's opponent is 52 percent.

Missed opportunities in transition are a killer when you are trying to come back. Tatum missed a layup, Spurs got a three. Could have been 13 points, but Spurs lead back to 18 in a blink.

Then, suddenly, the Cs began to play harder, defend with energy and hit some shots.

Theis with the old-fashioned three-point play and the Celtics have cut the Spurs lead to 11.

Celtics cut the lead to 9 and the Garden is alive.

JT throwin’ it DOWN

Tatum followed that with a steal and another hoop to bring Boston within 76-69. Then the refs missed a call and ruined the game.

Wow – Kemba was just ejected for back-to-back techs, and then Brad Stevens picked up a tech as well. That was a wild, wild sequence.

NBA refs got some of the biggest egos

Celtics-Spurs are in the middle of a great game. Ref just missed an obvious call and then compounded it by ejecting Kemba Walker. I hope they take that MF’ers whole game check.

Kemba definitely deserved the first technical, but the second one was a pretty quick whistle after he just repeated himself. "That's a f***** foul."

The result of all this was the Spurs, on the verge of blowing their huge lead, got their momentum back. They went on a 17-3 run to restore their margin to 21 and essentially end the game.

🤬 Kemba Walker ejected in third quarter after getting flattened by LaMarcus Aldridge screen
🤭 Celtics had cut deficit to 7 and, after flareup, Spurs went on 17-3 run
😴 No rest for Boston. Trip to play Embiid-less Sixers awaits Thursday