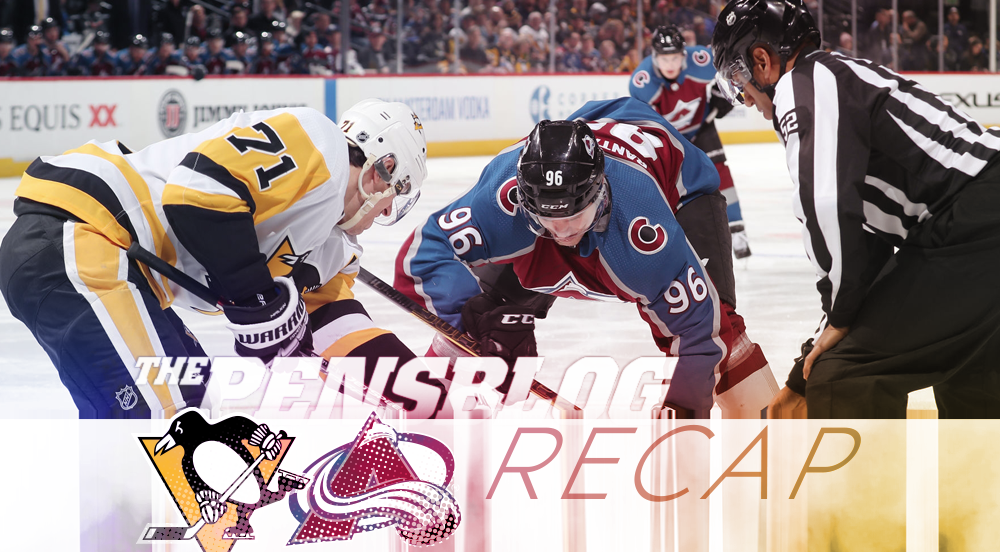 You may not be aware of this, but both Sidney Crosby AND Nathan MacKinnon are from Cole Harbour, Nova Scotia.

It’s a little-known fact that is rarely talked about.

Unfortunately, we wouldn’t get the Cole Harbour Bowl Part 69 last night, just the ghost of Ian Cole, because, despite progress, Sid remained out of the lineup.

The Penguins bruised and battered but getting healthier, rolled into Denver to play the league’s best home team, nearly blew it but Jared McCann would have none of your shit, ending it in OT.

As stated earlier, there was some thought that 87 would be ready to go for this one but HCMS put the kibosh on that.

Per Coach Sullivan, Sidney Crosby did not skate today in Colorado. He was scheduled to, but did not feel well.

Never you worry, this walking dead group of misfits has it covered, Sid. Get healthy and come back 100%

The Penguins always have like eight injuries and twelve call ups I've never heard of. The call is like "Malkin gains the zone with wingers Mark Donk and Buzz Flibbet" and you look and they both have 47 points

Pens were coming off a win over the Vegas Golden Knights where Marc-Andre Fleury allowed four goals on just 16 shots.

Why fix what isn’t broken?

The Penguins and Avs felt one another out the first five minutes of the game and then it was full speed ahead, starting with a chance from Nathan MacKinnon that certainly caused you to clutch your beer glass tighter than normal.

Never you worry, two-time Stanley Cup champion Matt goddamn Murray was there to shut the door.

MacKinnon with a head of steam beats Jack Johnson (spare me the takes, he’s Nate MacKinnon, he’ll blow by just about anyone) but Murr tracks him the whole way, giving him nothing to shoot at and stopping the puck.

From there, the Avs just about took over and just like the first save, Muzz was there.

With Geno in the box for a slash, MacKinnon would finally breakthrough. He had been buzzing the entire period and finally solved Murray.

Not a lot to breakdown here. On the power play, the Avs go low-to-high, MacKinnon sets up in Ovechkin’s office and makes no mistake off a solid feed from Girard.

The Pens appeared to have tied it thanks to Kahun but it was called no goal due to Rust crashing in on Francouz which was deemed interference.

With a power-play expiring and plenty of chances, the good boy Teodors Bleuger would tie this bad boy up.

Johnson comes out of the box and Pettersson, knowing he has someone bearing down on him, just tried to get it on net. However, that became basically a slap pass that would deflect off of Calvert and right to Bleuger’s stick.

No real reason for this. With the Pens and Avs trading chances, Murray makes a glove save through traffic.

Just want to get that on the record for the haters and losers (of which there are many!).

For all his brilliance, though, the universe gives and it takes away.

That’s bad luck, that’s all it is and we’re done discussing this, okay?

That would be all she wrote for the middle frame.

Pens down one, on the road, to the best home-ice team in the NHL, you wouldn’t be at fault for walking away from this one.

It would be bad and #dumb to walk away from this Pens team, though.

You know who made sure your decision to turn the game off was bad and #dumb?

For all his faults as a Penguin, James Neal absolutely nailed it when he said Evgeni Malkin is at his best when he’s playing like a bully. That’s exactly what happened here.

He works his way into the zone, BURIES Ryan Graves and Bryan Rust comes swooping in. He waits, lets Francouz open up and rifles it five-hole.

Murray and Francouz were called upon to make several big saves and they did.

With under five to play, the bully was back.

Rust’s presence on this goal is crucial: He gains the zone and works it to Kahun who eventually drops it to Malkin for a beautiful post-and-in goal past Francouz.

It’s what Rust does after he gives up the puck that makes this goal happen. He drives to the net, taking Erik Johnson with him. Johnson obviously has to respect a man driving to the net, that’s prime real estate. However, Rust stops directly in front of the blue paint and so does Johnson. This impedes Francouz’s vision just enough that he can’t fully see Geno’s shot and bang biscuit. The Pens have the lead.

The Avalanche to their credit, would not lay down.

With the goalie pulled, maybe the only rookie defenseman better than John Marino (and should be Norris candidate, imo), Cale Makar made his presence felt.

Burakovsky put the puck exactly where it needed to be in Makar’s wheelhouse, he fires a one-timer that Calvert gets a stick on and beats Murray.

With the goalie pulled, that’s the ideal situation and goal and the Avalanche made absolutely zero mistake.

Ensure that your babies are locked and in the upright position.

An overtime with Evgeni Malkin, Kris Letang, Jared McCann, Nate MacKinnon, Gabe Landeskog, Cale Makar, and others was about to get underway and buddy boy, nothing says Friday night cold ones like those stars and some 3-on-3 hockey.

However, with all that star power, it was John Marino, Teodors and Jared McCann that would wrap this one up.

Marino worked the puck to Blueger in stride and he gained the zone, McCann found the soft spot in the slot and buried it.

One more to go on the western swing. Off to Taylor and Phil’s house of Yotes on Sunday.