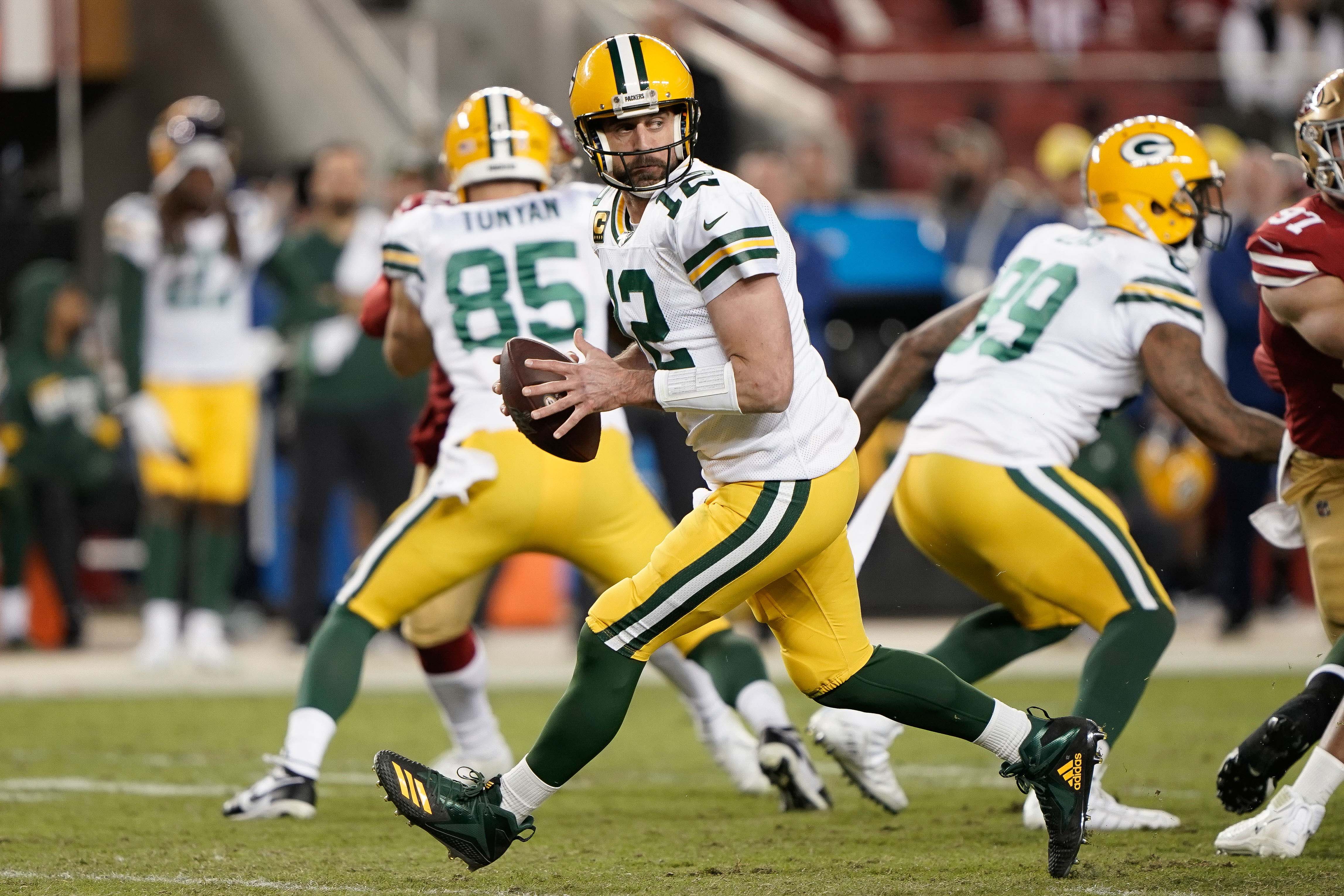 The Green Bay Packers travel west to Santa Clara to take on the San Francisco 49ers in the NFC Championship Game. The winner heads to Miami to play in Super Bowl LIV to face the winner of the AFC title game between the Titans and the Chiefs.

Green Bay leads the all-time playoff series between these two teams 4-3 including the 1997 NFC Championship Game which the Packers won in San Francisco.

Here is a look at the six key factors that will determine who wins Sunday and heads to the Super Bowl:

The 49ers defense got pressure on Rodgers throughout the regular season meeting between these teams and the Packers offense never really got on track. If Green Bay can’t give Rodgers time to throw, the offense will struggle again.

Having Bryan Bulaga back in the lineup is a big plus for the Packers. Even if Bulaga is unable to go because of the illness that caused him to miss last week’s game against Seattle, Jared Veldheer, who was not in the lineup the first time these two teams met, has been a major upgrade as the swing tackle.

San Francisco has a very strong pass rush and they also have their full lineup healthy and ready to play. Arik Armstead, Dee Ford, Nick Bosa and DeForest Buckner are all strong pass rushers so pressure can come from the A-Gap or from the outside.

The Green Bay offensive line of Bulaga, David Bakhtiari, Corey Linsley, rookie Elgton Jenkins and Billy Turner will have their hands full especially since Rodgers likes to hold the ball and extend plays. Linsley in particular had his worst game of the season against San Francisco and will have to do better this week.

Matt LaFleur may need to call for quicker passes early in the game to try to neutralize the Niners pass rush a bit.

2. Slow Down the 49ers Rushing Attack

The Packers run defense has done a better job slowing down opposing runners since their last meeting with San Francisco. The 49ers were second in the league at running the football and unlike the Seahawks, they have their full contingent of backs healthy and ready to run.

Raheem Mostert led the team with 772 yards rushing, a 5.6-yard average and eight touchdowns. Matt Breida also averaged more than five yards per carry while Tevin Coleman “only” averaged four yards per rush. By rotating the backs, the 49ers keep them fresh and wear down opposing defenses late in games.

The Packers have gotten stronger play from Kenny Clark in December and that helps free up Blake Martinez to make more plays closer to the line of scrimmage. Last week, both Kevin King and Jaire Alexander also did a good job making tackles in run support.

The Packers cannot allow the 49ers to control the clock by running the football effectively and certainly cannot allow long runs that can break open the game.

San Francisco’s passing attack relies on the running game to set it up so slowing down the run is the key to limiting the home team’s attack.

George Kittle is the most complete tight end in the league right now and he led the 49ers in receptions, yards and touchdowns.

The Packers have struggled to cover tight ends and stop passes in the middle of the defense for most of the season.

Kittle burned the Packers in November with a six catch, 129-yard game that included a back breaking 61-yard touchdown catch.

Kittle will get his targets and catches, but the Packers need to hold him to less than 100 yards and not allow him to break off long passes like he did in the first meeting between these teams.

4. Make Sure Aaron Jones Gets His Touches

Aaron Jones is one of the three playmakers that makes the Green Bay offense go. In the first meeting between these teams, the San Francisco defense limited Jones to 38 yards rushing on 13 carries and the UTEP alum didn’t catch a pass.

LaFleur needs to get Jones involved whether it’s running the football or getting him touches in space via the passing game. If Jones gets fewer than 20 touches, the Packers are in trouble.

San Francisco’s rushing defense was middle of the pack, ranking 17th in the league with 112.6 yards rushing allowed per game.

Jones and Jamaal Williams need to get the football. If the running game bogs down, LaFleur cannot abandon it entirely and he needs to get Jones and Williams some passes to match them up on linebackers and create mismatches.

Jimmy Garoppolo had a strong season with a 102.0 quarterback rating, but he does make his share of mistakes. The 49ers starter threw 13 interceptions and fumbled 10 times, losing five of them.

The Packers need to get Garoppolo out of his comfort zone with pressure and disguised coverages that force him to hesitate before he throws the football.

The San Francisco offense thrives on short drops and quick passes which may nullify the pass rush of Preston and Za’Darius Smith. The Packers did sack Garoppolo three times in the first meeting which is impressive considering he threw only 20 passes.

If the Packers can force Garoppolo to make one or two big mistakes, they can stay in this game and give Rodgers a chance to work his magic and win it.

Adams was the big star of the Packers offense against Seattle and is their most dangerous pass catching weapon. In the first meeting between these two teams, the 49ers were able to slow Adams down. While the Fresno State star caught seven passes and scored Green Bay’s only touchdown, he gained only 43 yards and his longest catch was for just 14 yards.

Yes, the Packers need to have other receivers come through in key situations like Jimmy Graham did against Seattle, but without another strong effort by Adams, the Packers offense is in trouble.

It will be a chess match to see if Richard Sherman is matched up with Adams and whether LaFleur moves him to the slot to get him away from Sherman and scheme him open.

This game will not be a blowout like the earlier meeting, but on paper, San Francisco is a deeper team than the Packers and they are playing at home.

The Packers will need strong games from their star players and to win the turnover battle to have a chance to advance to the Super Bowl.

This game will be close till the end, but the Packers will come up just short.