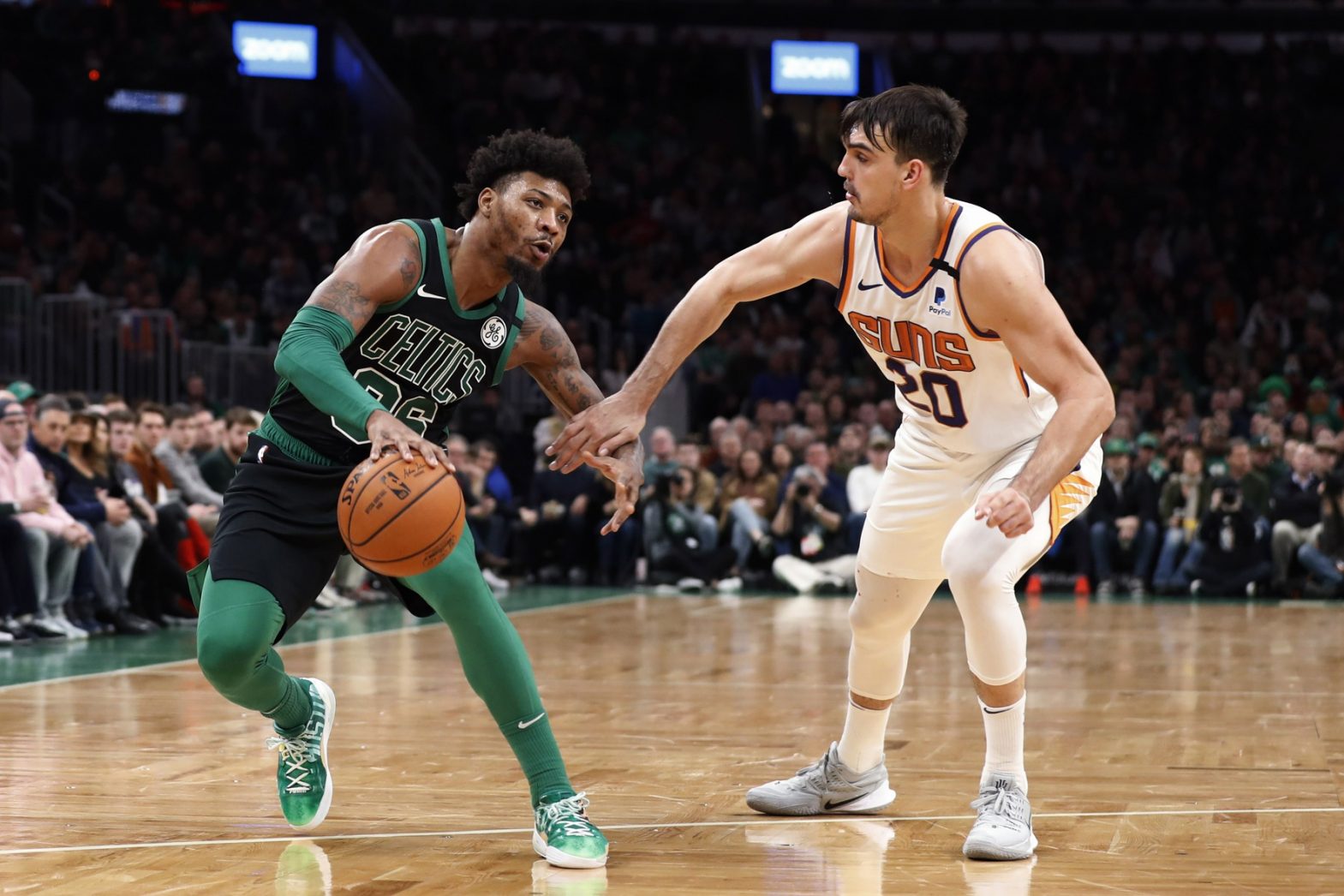 Another morning, another postmortem on a close Boston loss.

I’m already calling my own rationality into question in the title, so as you can imagine, there is SOME FRUSTRATION AT THE MOMENT ABOUT THE CELTICS’ RECENT PERFORMANCES. But I’ll do my best to look at things with more nuance:

Marcus Smart, Elite Shooter™ can be a double-edged sword.
Last night Marcus Smart broke the Boston Celtics franchise record for made three-pointers in a single game, with 11 made on 22 attempts for 37 points. (He made half of his other four shots for 13-25/52% overall.)

It’s hard to deny the excitement produced by watching Smart accomplish this. And there’s no question his efforts on both ends of the floor kept Boston in the game. But these attempts by Smart to force the Celtics to victory by sheer will, combat muscles, grit and firepower have a habit of manifesting themselves in losses, when few other things are working on offense. Which was definitely the case last night. Missing Kemba and Jaylen put a bigger burden on him than usual, and he stepped up—but it’s probably best when he doesn’t have to.

Last night dropped the Cs’ defensive rating a spot down the league ladder.
Sometime mid-game, the NBCS Boston broadcast showed a chyron noting the Celtics’ defensive rating: fourth-best in the league. As of today, they’re fifth, allowing 105.9 points per 100 possessions. (Charlie B. noted in this morning’s Dump that the Cs yielded an average of 113.7 points a game to opponents during this stretch, well behind their season average of 105.6. The per-100 DRTG is at a similarly putrid 111.8.)

Letting Devin Booker drop 30+ on you is one thing—it happens. Not infrequently it happens in Suns losses. But then you add Ayton’s 26, nearly half of which came at the charity stripe because the Cs couldn’t defend him without fouling. Then you have Saric’s 13, and the inability to defend him is even more frustrating: It should be well within the abilities of Tatum, Hayward or even Grant Williams. Speaking more generally, Boston was drastically out-rebounded (Phoenix grabbed 52 boards to the home team’s 39), and despite a few reasonable stretches of rim protection often let it be open season on the cup. The defense needs to apply more physical pressure if this team hopes to escape its rut.

One thing I won’t blame the defense for is Mikal Bridges’ 26 points. He took 8 of his 13 shots from beyond the arc, and most of his 2s were on the longer side. That’s what you want to trick a career 29% three-point shooter into—it just burned them this time.

Early-game shooting woes returned.
The Phoenix Suns’ defense is worse cumulatively than the Celtics’ has been in the course of their rut: They allow more opponent points per game (114) and almost as many points per 100 (110.6). Last night they stuck to their script, meaning plenty of open shots for Boston. Sometimes these open looks were taken weirdly early in the shot clock or originated from sloppy movement by either Tatum or Hayward (last night mostly Hayward), but there were more than a few good looks that simply didn’t go down.

By the time they started going down with relative frequency, the defensive troubles Boston experienced meant that the deficit was insurmountable.

The lineups…are troubling.
People have been agita-ing about the Celtics’ lineups all season, even when they were merely “questionable, at times” as opposed to their current status of “What the fucking fuck, Brad?”* Last night, Grant Williams started, was overwhelmed and got yanked in less than five minutes (not seeing the court again until Q4). I’m pretty sure Javonte Green, Enes Kanter and Brad Wanamaker shared the floor at one point. Regardless of who else was on the court with those three at that time (I honestly don’t remember), the extremely uneven nature of all those dudes seems like a recipe for disaster, in any context.

Stevens has had success with mix-and-match configurations bizarre enough to pique David Lynch’s interest** but seems somewhat uncertain regarding how to deploy this season’s part-reserve/part-starter lineups. For example, he’ll let a talented but raw guy like Javonte or Tremont Waters stay out there longer than they should, taking truly ill-advised shots. Stevens can also have a particularly quick hook for Theis and not enough of one on Kanter. All of this stems from the current bench’s deficiencies and the effect of injuries, and we know Brad knows how to make the most of his starters, but it’s been no fun seeing these strange groups of dudes get hammered by opponents.

**For some reason I think Lynch would be really into lineups including Jae Crowder and Luigi Datome. Shoutout to the 2014-15 Celtics.