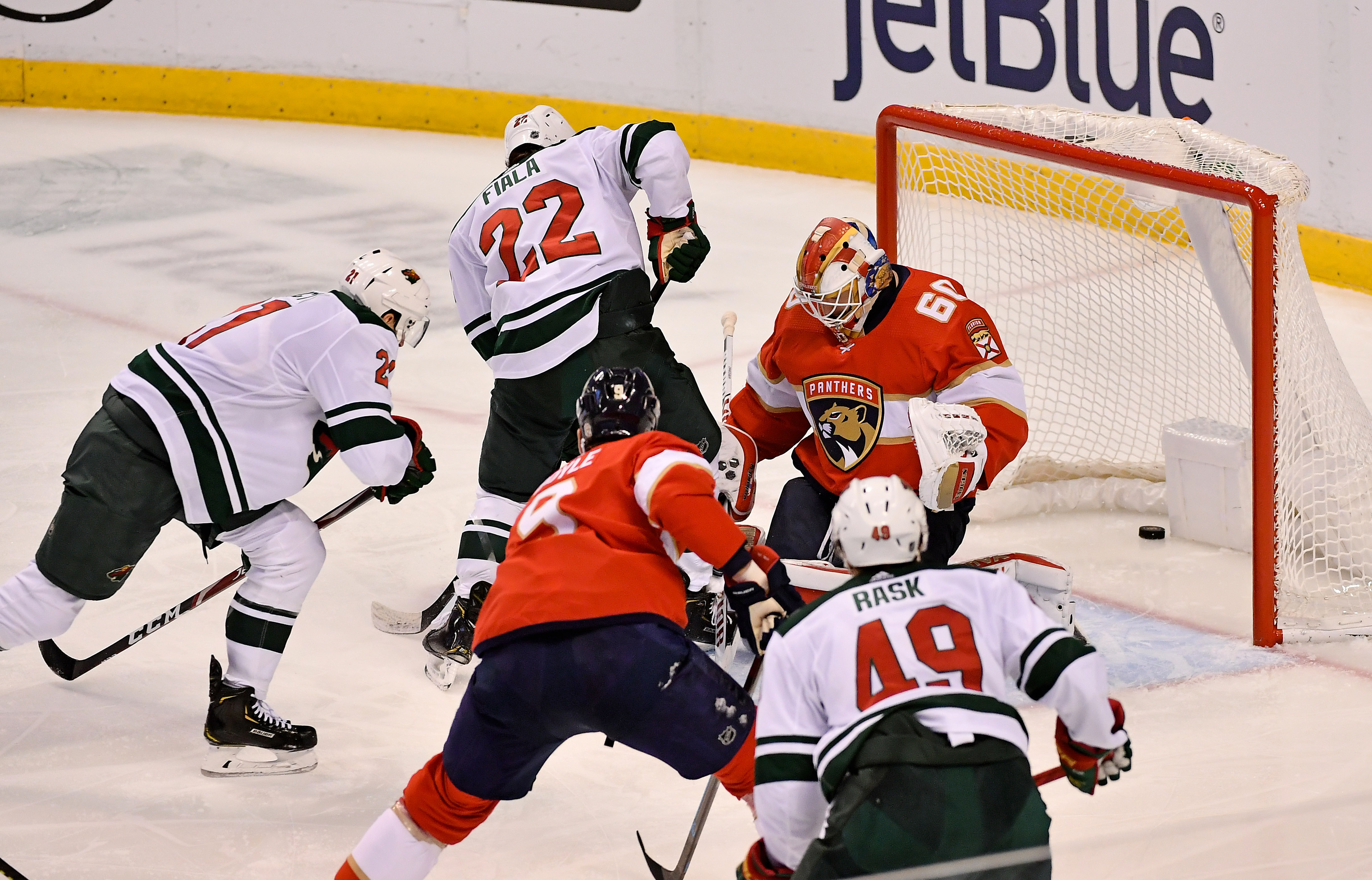 The Minnesota Wild capped off Hockey Day Minnesota 2020 with a 7-0 rout of Dallas.  Minnesota was unusually motivated and physical against the Stars.  With two more games to go before the NHL All Star break will the team have the same level of focus and intensity that allowed it to overwhelm Dallas so completely?

The Florida Panthers seem to be hitting their stride and their potent offense makes them a dangerous opponent for any team in the league.  Minnesota managed to earn a win in Florida earlier this season, can the Wild get the season sweep tonight?

1st Period Thoughts:  The Wild started out with an excellent shift by its 2nd line of Victor Rask, Kevin Fiala and Jason Zucker.  The speedy trio was able to work the puck in deep in the Florida zone and keep the Panthers pinned in their end and chasing around for the puck.  Not many shots were being taken but it set the tone early.  The offensive zone possession finally yielded a quality scoring chance as Eric Staal fed a pass into the slot where Matt Dumba fired a shot high and wide of the goal.  Later in the shift it was Staal firing the first shot on goal that was blocked aside by Sergei Bobrovsky.  The Panthers would strike first a few minutes later as Mike Hoffman found a pinching Keith Yandle for a back door tap in that Alex Stalock had no chance on.  1-0 Panthers.  Minnesota would try to answer back, and a few wrist shots from the point by Ryan Suter reached Boborovsky but he was able to come up with the saves despite a fair amount of traffic in front of his crease.  Jordan Greenway would draw a holding penalty on Josh Brown giving the Wild the first power play of the game.  Florida’s penalty kill was very aggressive on the puck carrier and this would give Minnesota’s power play some trouble and they’d spend the first 40 seconds just trying to get set up in the offensive zone.  Mats Zuccarello would try setting up Zach Parise that just failed to connect.  The puck pressure by Florida’s penalty killers meant the passes had to happen quick and be accurate but they also yielded some quality chances as Rask set up Zucker for a chance in close but Bobrovsky was able to deny his backhand shot.  The Panthers didn’t have a lot of chances but they mostly created shooting opportunities off of their cycle.  Marcus Foligno would crush Mike Matheson with a huge hit.  Alex Stalock would make a fine stop on a shot by Hoffman.  A shift later, it was Stalock making a sprawling stop by Brett Connolly and the Wild would counter attack but Ryan Donato‘s shot would be deflected up into the netting above and behind the Panthers’ goal.  Minnesota kept swarming in the Florida zone, sending all kinds of shots towards the goal but many of them were missing high and wide and not forcing Bobrovsky to have to make too many saves.  At times it almost looked like an extended Wild power play with how much time the Wild were spending in the Florida end.  Joel Eriksson Ek had a good close in chance that was fought off by Bobrovsky.  Minnesota’s forechecking pressure would draw another penalty as Anton Stralman sent a puck up into the stands as he tried to avoid a big hit by Foligno.  With a just 36 seconds left in the period to work on the power play, the Wild wasted little time as a point shot reached Bobrovsky and then he was able to stop a rebound chance but Jared Spurgeon was there to jam home the biscuit to tie the game 1-1 going into the 1st intermission.

2nd Period Thoughts:  Within the first minute of the final period, Foligno would take a puck to the face.  Thankfully the visor he wears protected him as intended.  The Wild would struggle to get the puck out of their zone and to get any sort of solid possession in the neutral zone in order to cross over into Dallas’ zone.  It’s this deficiency which has allowed the Stars to even up the shots on goal.  And when a team is down 5 goals, evening up the shots on goal is a sign they’re desperately looking for a goal.  Minnesota is lucky that Stalock has come up big when he has, because this game could be much different.  In the early minutes of the period, the Wild would get zone time, but like many times, it takes them a while to decide what they’re going to do with that zone time.  Many times it’s a pass into traffic or simply a pass to no one in general.  It’s those passes that send you back into the neutral zone without generating any sort of offensive pressure.  But what is more difficult, is that when you face the offensive leaders in the league, you risk putting yourself in the odd-man situation and giving up a goal. Miraculously, they have avoided that for the most part tonight.  I would like to see this team get more pucks in close, like they did on their first period goal.  About four minutes into the period, and many of the shots are coming from the perimeter.  Strangely though, even with those perimeter shots, they’re getting legitimate shots on goal.  We’ve definitely seen nights where this team is kept to the edges all night and register very few shots on goal. Neutral zone turnovers (most notably by Fiala) almost led to a goal by Aleksander Barkov, thankfully both Stalock and his skaters. As the period gets near the midway point, it should be noted that Minnesota is starting to have to issues clearing the puck.  Either they can’t get it past their blueline or they end up taking the icing call.  The Panthers would strike after a long stretch pass by Brown up to Barkov who had a step on Carson Soucy and he’d move in and chip a shot by Stalock.  2-1 Panthers.  Minnesota would try to answer right back as Zuccarello tried a wrap around that was chipped up high by Parise but gloved out of the air by Bobrovsky.  Rask would get called for tripping Noel Acciari putting the Panthers on the power play.  The Panthers moved the puck well, point to point but Stalock was seeing the puck well through traffic and a had a few nice glove saves.  Minnesota would counter attack with some puck pressure as Eriksson Ek saw Aaron Ekblad was flat footed and he’d win the race for the puck and then dish a perfect backhand pass to Luke Kunin who managed to beat Bobrovsky with a quick shot.  2-2 game.  A few shifts later, Spurgeon found Eric Staal with a long stretch pass giving the veteran a breakaway but his wrist shot would miss high and wide of the goal.  Minnesota would get a bit reckless with the puck and Florida would nearly cash in as Hoffman was stopped by the leg pad of Stalock.  The end of the period was a bit too pass happy but the Wild had to feel pretty good being tied at 2-2 going into the 2nd intermission.

3rd Period Thoughts:  The Panthers had a good chance early as Dominic Toninato had a redirection that Stalock had to be alert on to make a big stop.  Moments later, Fiala would get a boarding call when he hit Frank Vatrano from behind near the Florida bench.  The Panthers would cash in on the man advantage as a point shot by Yandle was redirected by Evgenii Dadonov and by Stalock.  3-2 Panthers.  Minnesota would draw a penalty a few shifts later as Fiala turned on the jets that Matheson couldn’t keep up with and he’d trip up the Wild forward.  He angrily went to the penalty box, and Minnesota would make Matheson and Florida pay for their lack of discipline.  Early into the power play a quick point shot was stopped by Bobrovsky but Parise was there to bury the rebound.  3-3 game.  The Panthers would try to respond with a goal of their own as Brian Boyle stepped into a slap shot that was fought off by Stalock and then cleared to the corner by Suter.  Minnesota would then take the lead as Foligno used the boards to pass a puck to Eriksson Ek who then passed it back to a trailing Kunin who wired a shot by Bobrovsky.  4-3 Wild.  The Panthers tried to raise their physical game as Josh Brown stuck a leg out to sending Foligno falling over backwards on his back.  A shift later it was Boyle crushing Parise against the boards to the collective groan of the home crowd.  Minnesota was sitting back into a passive 1-2-2 neutral zone trap.  The Wild kept applying token offensive pressure and they draw another penalty on the Panthers as Vatrano hauled down Zucker.  Minnesota’s power play moved the puck very well, setting up Dumba a number of times for blasts from the point that Bobrovsky stopped.  It was good offensive pressure for the Wild without being reckless.  The Wild were working hard, trying to force pucks deep and keeping shifts short.  Unfortunately it wasn’t quite enough to keep Florida off the scoreboard as a long pass by Stralman found Vincent Trocheck with a little room and he’d send a shot on goal that beat Stalock 5-hole.  4-4 on what was a pretty soft goal with 4 minutes left in regulation.  Perhaps sensing a momentum shift, the Panthers were on the attack the last few minutes of the period.  Minnesota would try to counter with some strong play down low in the Florida zone which culminated in a shot by Ryan Hartman that was steered aside by Bobrovsky.  The Panthers would take the lead with just 4.8 seconds left as Acciari redirected a shot from the point by Mark Pysyk that trickled by Stalock.  The goal would be reviewed to see if Acciari’s stick was above the cross-bar.  Ultimately the goal would stand and the Panthers would skate away with a 5-4 victory.

LW – Vladislav Firstov (UConn, H-East) ~ the freshman winger is heating up offensively as he had two goals on 4 shots in the Huskies’ 3-2 win over Northeastern on Saturday.  Firstov leads the Huskies in scoring with 9 goals, 16 points, 23 PIM’s and is a +6 in 23 games.

G – Filip Lindberg (UMass, H-East) ~ the Finnish-born goaltender had 34 saves in the Minutemen’s 4-1 win over Vermont on Saturday night.  Lindberg has as 7-4-1 record, a 1.93 goals against average and a .929 save percentage with 2 shutouts.

G – Hunter Jones (Peterborough, OHL) ~ the Toronto-native earned 1st star honors on Saturday night with a 30-save shutout in Peterborough’s 2-0 win over Flint.  Jones has a 23-8-3, 2.77 goals against average and a .912% save percentage with 3 shutouts on the season.

F – Nikita Nesterenko (Chilliwack, BCHL) ~ the Boston College-commit continues to be a steady point-producer for the Chiefs as he chipped in an assist in Chilliwack’s 3-2 win over Langley on Sunday.  Nesterenko has 16 goals, 40 points, and 23 PIM’s in 42 games.