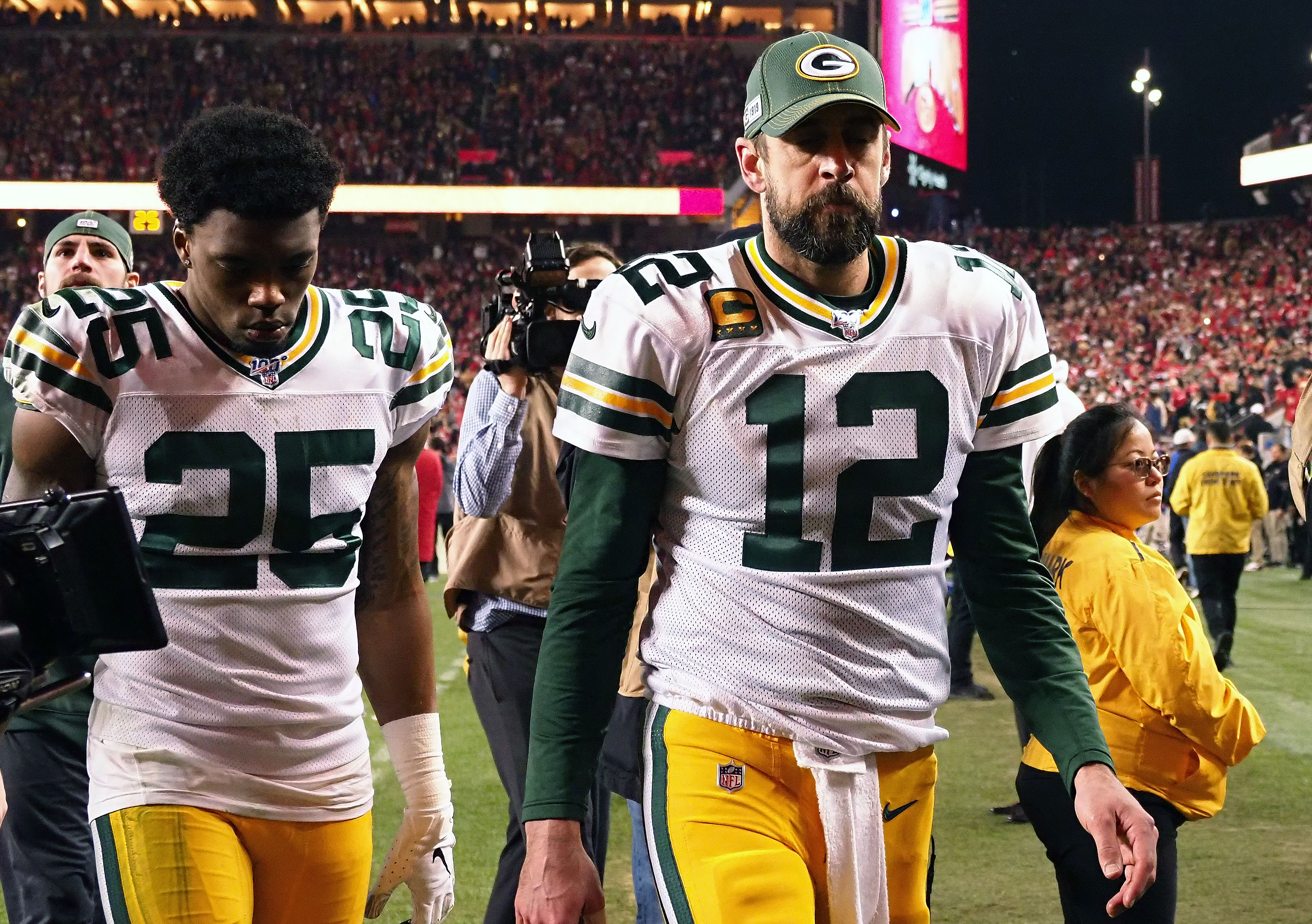 The Green Bay Packers season ended with their embarrassing 37-20 loss to the San Francisco 49ers in the NFC Championship Game. The 49ers dominated the game from the start, taking a 27-0 lead at halftime aided by a dominant running game that gained 285 yards gained on the ground.

Aaron Jones scored twice for the Packers while Aaron Rodgers threw for 326 yards and two touchdowns in a losing effort.

Here are 10 things we learned from Green Bay’s loss to San Francisco:

The 49ers ran the ball at will on Green Bay, so much so that they only threw eight passes all game. Why pass when you don’t have to? San Francisco gained 285 yards on the ground on 42 carries and those numbers include three plays in victory formation that ended the game.

The 49ers averaged 6.8-yards per carry, an unacceptable total no matter how you break it down. They also had nine rushes of 10 yards or more in this game.

Raheem Mostert did most of the damage, rushing 29 times for 220 yards and four touchdowns. Mostert averaged 7.6 yards per rush.

Without stopping the run, the Packers had little chance of winning this game.

2. The Green Bay Offense Self Destructed

The Packers offense struggled to move the ball consistently until the game was already out of reach. Green Bay’s only sustained drive of the first half ended when Rodgers muffed the snap from center at the San Francisco 25 and the 49ers recovered.

The Packers also turned the ball over gain late in the half when Rodgers were intercepted by Emmanuel Moseley and that helped the home team add to their lead just before intermission.

Penalties and sacks also disrupted several drives as the offense struggled to protect Rodgers and move the football.

Yes, the offense did move the ball in the second half but by then, it was too late.

Matt LaFleur tried some roll outs and quick passes, but the Packers had no answer for the San Francisco defense who shut down Green Bay’s offense in the first half and put the game out of reach.

3. Davante Adams Was Not a Factor in the First Half

Adams caught a pass on the Packers second offensive play which gained seven yards and then was a forgotten man for the rest of the half. In fact, it was his only target in the first two quarters.

The 49ers were determined to shut down Adams after he dominated the Seahawks a week ago and they did in the first half. They matched Richard Sherman, their top cover corner, on Adams no matter where he lined up for most of the first half. Rodgers and LaFleur were hesitant to challenge Sherman and that eliminated Adams.

In the second half, Adams had eight catches for 131 yards including a 65-yard bomb that saw him beat Sherman deep with a great move at the beginning of the pattern. But by then, the game was all but out of reach.

4. Aaron Rodgers Couldn’t Throw Downfield in the First Half

The 49ers sacked Rodgers three times in this game, but in the first half, they didn’t let the Packers get the ball downfield. Nick Bosa and company were in Rodgers’ face and forced him to throw before he wanted to on several occasions.

While the Packers quarterback completed 9-of-12 passes in the first half, he gained only 65 yards or 5.4-yards per attempt. His long completion of the half was 23 yards.

The 49ers also had Rodgers’ favorite receiver blanketed (see item 3) and that limited the overall effectiveness of the Green Bay passing attack.

If I told Packers fans before the game started that the Green Bay defense would limit Jimmy Garoppolo to 77 yards passing, most of them would have taken it in a heartbeat. But the fact is, with the running game pounding the ball so effectively, San Francisco had little reason to throw the football.

In this game, the running attack was so effective, Garoppolo only had to make a handful of throws throughout the game.

Even after the Packers realized the San Francisco game plan, they were unable to slow down the 49ers run game.

When you’re a road underdog playing against the top seed in the conference in a playoff game, you need to win the turnover battle to have a chance to win unless you play an outstanding all-around football game.

The Packers lost the turnover battle 3-0. The first fumble cost the Packers a chance to score and keep the game within reach in the second quarter when they were already down 17-0.

The second turnover came just before the half and allowed the 49ers to score a touchdown that made the score 27-0 at the break.

The final interception came after the game was already realistically out of reach but prevented the Packers from putting together any miracle comebacks or at least making the final score more respectable.

The fact that Green Bay’s defense was unable to force any turnovers also helped seal their fate. Had they recovered a fumble or two, it would have made the game a lot closer. Still, it’s almost impossible to beat a better team on the road when you lose the turnover battle 3-0.

The Packers running game did put up some decent statistics but by halftime, but they knew they couldn’t afford to run much more once they fell so far behind.

At the half, Aaron Jones had 49 yards in nine carries which averages out to 5.4-yards per attempt. He had three carries in the second half for just seven yards but that was just to keep the defense off guard.

Jones did score twice in the game and caught five passes for 27 yards, but by taking such a big lead, the 49ers essentially neutralized the Green Bay running game without even stopping Jones consistently.

The Packers fell behind 27-0 at the half but still managed to outscore the 49ers 20-7 in the final 30 minutes.

The team was still hustling and trying to make plays even when the game was essentially out of reach.

There was a small glimmer of hope when Jace Sternberger’s first NFL touchdown pulled the Pack to within 14 with 8:13 left, but the defense couldn’t get the ball back quickly and that was essentially that.

You can say the Packers were outplayed and lost to a better team, but you can’t say they didn’t show up or that they quit and that’s a testament to the men wearing the green and gold.

The Packers deserved to be the number two seed in the NFC with 13 wins including several close games. But let’s face it, the gap between the Packers and the 49ers is real and substantial. San Francisco is a deeper team and a stronger team than Green Bay right now.

In the two meetings between these two clubs in 2019, San Francisco outscored the Packers 71-28 and led at the half by a combined score of 50-0.

The 49ers deserve to go to the Super Bowl this year and the Packers simply must congratulate them on a job well done.

10. This Was Still a Great Season

This loss stings a lot right now, but few fans or experts expected the Packers to win 13 games under a rookie head coach and reach the NFC Championship Game.

Green Bay provided the fans with a lot of exciting football this year and won games in ways few could have predicted.

The key now is can LaFleur build on this first season and take the Packers further in 2020. The offseason begins now, and we will start to analyze what happens next starting tomorrow.