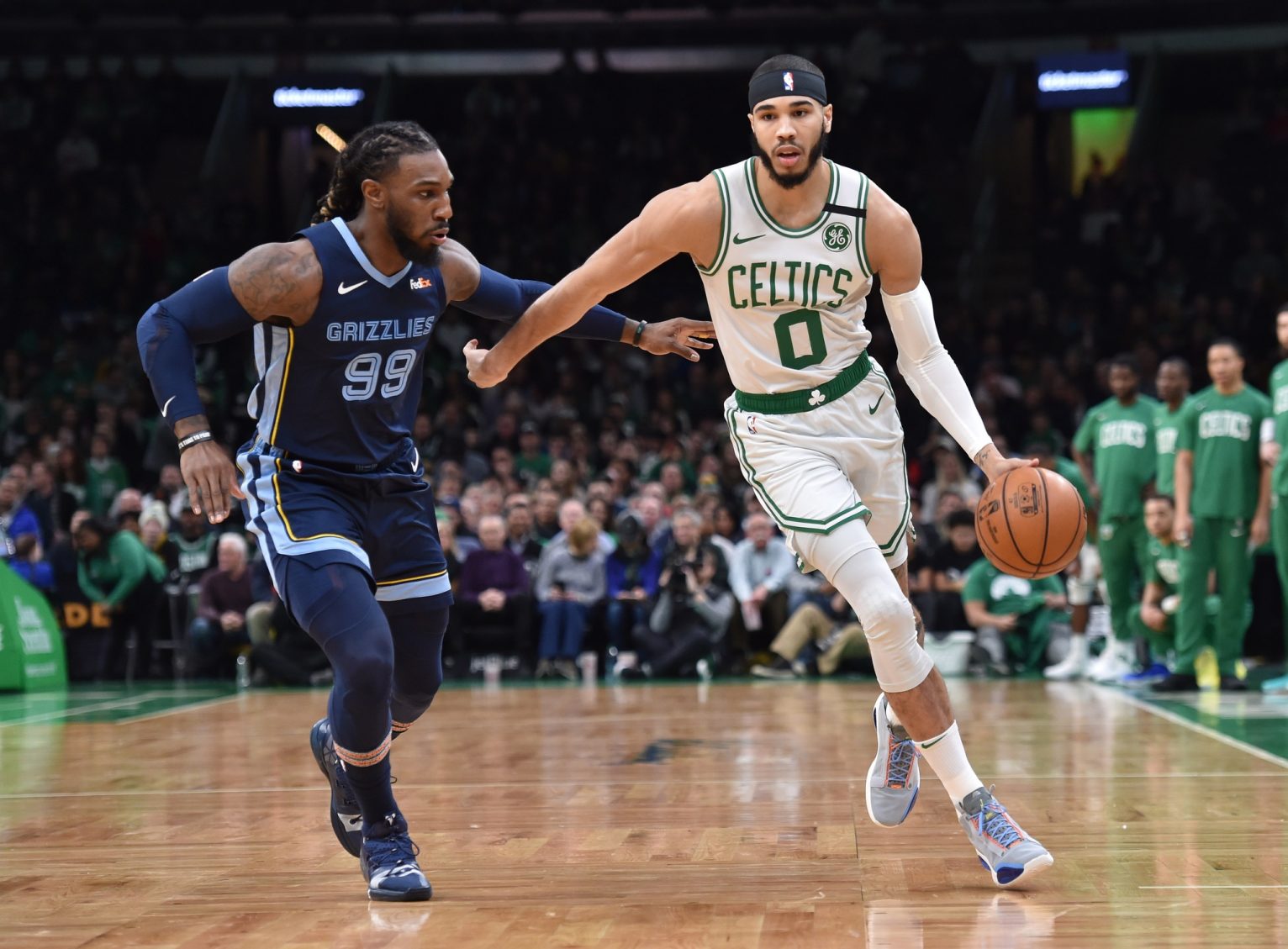 No time for the Boston Celtics to bask in the glory of their MLK Day evisceration of the Los Angeles Lakers: The fiery Memphis Grizzlies were in town to knock Boston off of their cloud, just like they’d done to quite a few high-echelon teams this season…BZZZT WRONGO.

After about a quarter and a half of well-matched basketball, the Celtics said, “To hell with this actually,” and blew the game open. More specifically Jayson Tatum (23-7-4-2-1) and Daniel Theis (14-4-2-2-3) blew it open, but the squad had four other double-figure scorers: Enes Kanter (13), Gordon Hayward (12), Marcus Smart (12) and Brad Wanamaker (10), pouring on the punishment with crisp motion offense and stranglehold defense.

Theis hits a 3 and a layup. Solid answer to Valanciunis trying to bully him.

On the way back up the court Jae Crowder stopped by the #Celtics bench to give Brad Stevens a high-five.

With the league’s best offense for January (123.1 points per game), the young Grizz were certainly gonna punch back:

Four straight threes from the Grizzlies and they've grabbed a 15-9 lead.

For me, it was most notable that Boston, despite missing shots, was generally making smart plays on offense and keeping the ball in motion—basic but essential things missing from their recent losses and all over their win against the Lakers.

Hayward with the beautiful feed to Kanter 🎯 pic.twitter.com/s8CXkKczOa

Certainly what you prefer to see.

Hayward and Wanamaker are the best transition players in Celtics history. Sorry Hondo.

Boston and Memphis exchanged close leads and runs through the second quarter, with Tatum (unsurprisingly) and Theis (more surprisingly) remaining their primary offensive forces due to Kemba’s cold spell and Brown’s absence.

(also: entire bench now mimics a one-handed floater in celebration when he gets it to fall).

Through a combination of paint-clogging defensive intensity, Tatum’s dominance and several common young-team mistakes on the Grizzlies’ part, the Celtics reclaimed the lead more sustainably, in a 23-2 run to close out Q2.

Ahead comfortably 58-44 at the halfway point.

I fuck with the vision pic.twitter.com/ecmBaeYzqT

Back in the actual game, Boston really started running away with things right from the third-quarter tip:

In less than 12 minutes, the Celtics have outscored the Grizzlies 41-9.#Analytics

The run extended to 43-9 before steal of the 2019 draft Brandon Clarke snapped it with a triple. But we’re definitely in “early preparation for Gino Time” mode here.

And yet…Cs fans can’t even have a nice blowout without worrying about an injury to the team’s second-best player.

FUUUUUUUUUUUUUUUUU. Officially listed as a “right groin strain.” Tatum was originally listed as not returning to the game, which was definitely the right choice in a blowout, even if it’s something that wasn’t that bad and could, in more dire circumstances, be walked off/played through.

Jayson Tatum back on the bench with a wrap over the groin strain.

That in/of itself was probably a “fan reassurance” move.

With a 36-point lead (99-63 to start Q4), Brad Stevens emptied the bench and let the chips fall where they may. And by emptied I mean emptied; we got Vincent Poirier minutes up in here. Plus wholesomeness!

Grant tried to say it was his fault for a bad lob and Javonte told him it wasn’t. Very wholesome behavior.

Now Kanter has a bit of a limp as he heads to the locker room with a member of the team's medical staff.

Well, I guess it’s good Vinnie Sexpants is healthy if we’re gonna be down a center for a minute again. Whatever. Great win.