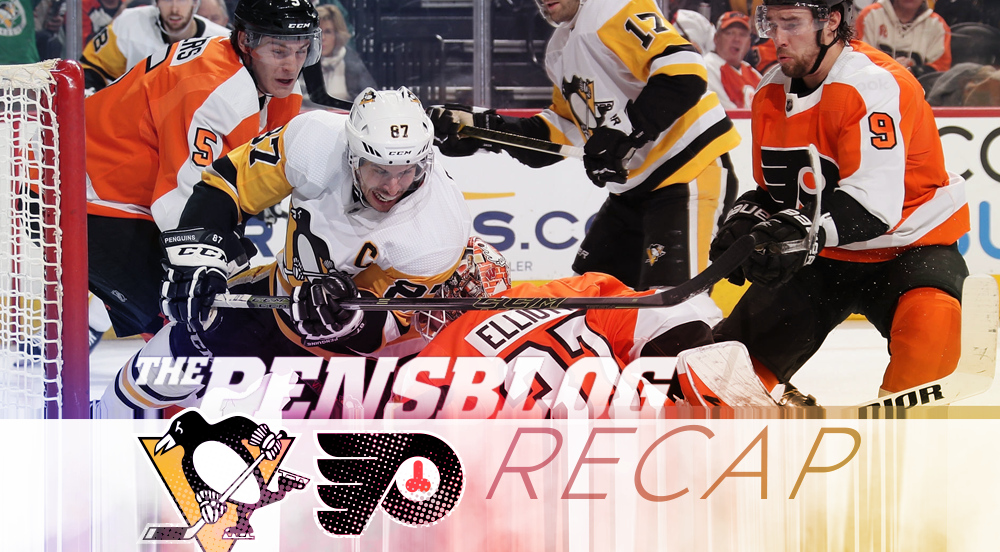 The Penguins wrapped up their schedule proceeding their bye week last night with a game in Philly. Coming into this game, the team has had 2 consecutive days off without a game exactly one time this month as this matchup marked their 11th game in 21 days. I’m not making excuses, but I know your ass just wiggles the mouse at the office the day before vacation, too.

From the beginning, you could tell that everyone not named Tristan Jarry was asleep. The Philly faithful went with their original “Crosby Sucks” chant. Sid called, said he doesn’t care. 21 chances for the Flyers, 17 for the Penguins by the time the first 20 ended.

The Flyers woke up a bit more, the Penguins continued not giving a damn. It didn’t take long for the Pens to cave, as Jakub Voracek scored 5:26 into the period.

Jack Johnson jumps up, Chad Ruhwedel leaves his spot because Malkin is “there,” I’m not going into detail, this is just lazy hockey.

The rest of the period looked a lot like that goal. The Penguins were dead. The Wells Fargo atmosphere was dead, may have been the microphones on the broadcast, but it sounded like a library. The Flyers took a 2-0 lead 18:40 into the period when John Marino got burned trying to carry the puck too long:

Marino with the initial turnover, Johnson with the should I block the pass or should I not indecision, easy goal. The weirdest thing about this goal:

If a tree falls in the forest? These responses are becoming increasingly annoying. You can’t make a comment about a defender or a goalie without getting a rebuttal that doesn’t make sense. The Marino turnover resulted in a goal. It’s okay to admit that the rookie made a mistake. It’s also okay to not like Kri Letang and go one day without mentioning it. $50 says you screamed like the rest of us when he buried that goal in San Jose in 2015 though.

The Pens wouldn’t allow another goal in the second.

Here's a look at your Penguins vs. Flyers stats after 40 minutes of play. pic.twitter.com/n1080dsADT

I’m not going to lie, I went to sleep. Conveniently so did the Penguins. I watched briefly at 4 AM before work, they were definitely looking forward to the week off.

The Flyers added an empty netter at the end.