Your Morning Dump...Where the Hospital Celtics are finally healthy and the offense is finally humming 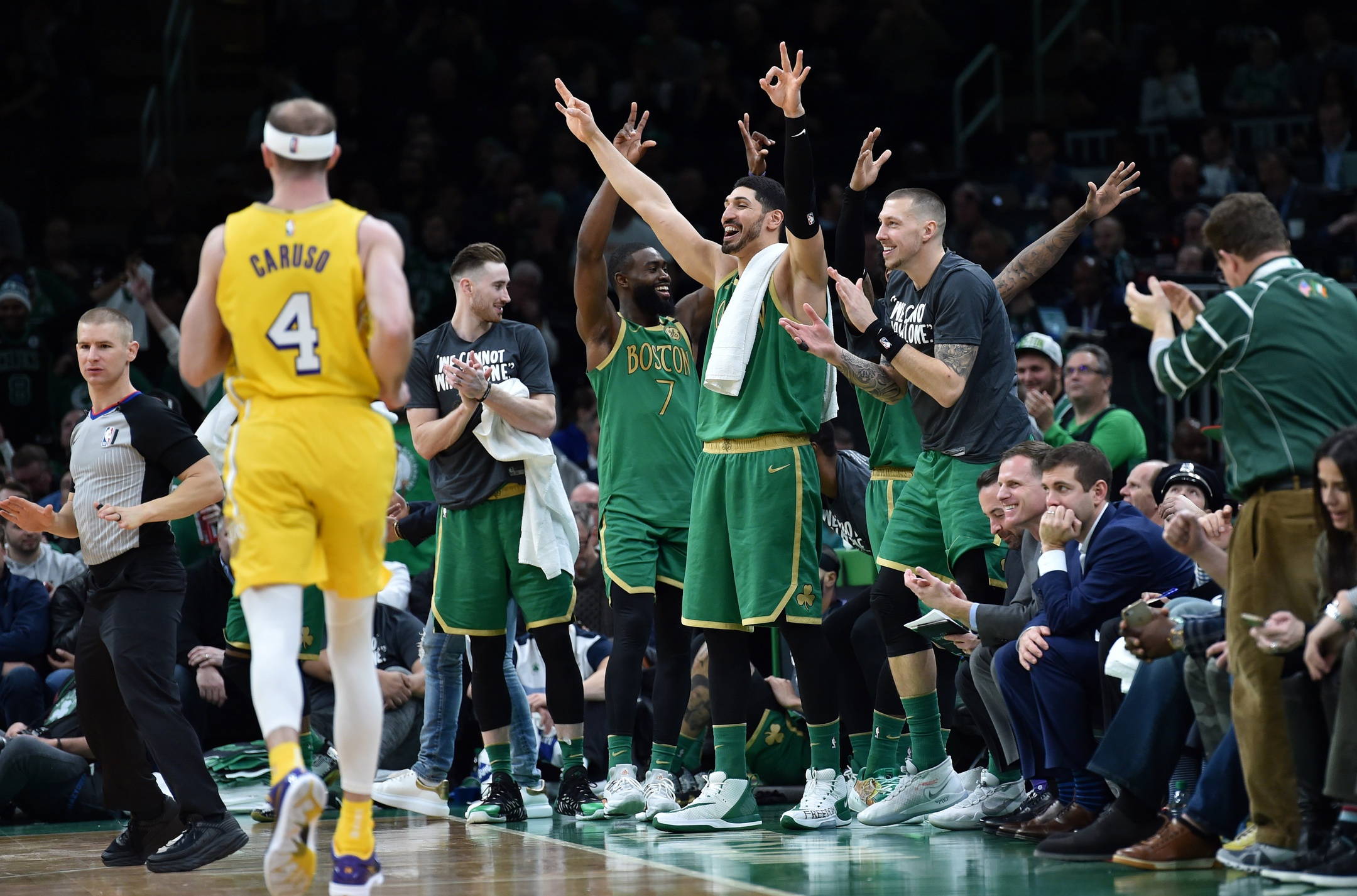 Your Morning Dump...Where the Hospital Celtics are finally healthy and the offense is finally humming

It’s been well documented over the last few seasons how hard the injury bug has hit the Celtics. 2 years ago Gordon Hayward and Kyrie Irving went down, last year Marcus Smart tore an oblique right before playoff time and was a shell of himself in the second round, and then this season we’ve seen our fair share of guys go down. Monday night however, their big guns were all healthy, and they capped it all off with one of their best efforts of the season.

Monday’s game offered a glimpse of what a full-strength Celtics team can be.

Boston has so rarely had all of its horses this year that it’s been hard to draw firm conclusions about the team’s potential. The injury woes made their early-season success all the more startling and, while the team never really used it as a crutch during the recent rough patch, it was fair to wonder how much injuries were conspiring against Boston when it did struggle.

To put it lightly, the Celtics gave LeBron and the Lakers an absolute beating on both ends. They never let their foot off of the gas pedal as they never were satisfied on the offensive end while resembling a pack of famished wolves on defense. Other than their 140 point showing against New Orleans on the 11th of January, this was their highest scoring output of the season. To do that against a doormat like New Orleans is one thing, to do it against the first place Los Angeles Lakers is another.

A few numbers that stuck out from Monday night:

While the shooting numbers are astronomical and can’t be sustained on a night to night basis, the rest of this was interesting. For a team who averages 49.2 points per game in the paint and 45.7 rebounds per night, breaking 60 in both of those categories is impressive. Specifically, Enes Kanter was able to pour in 18 points and 11 rebounds off of the bench. There have been questions all season about the Celtics’ front court, but when everybody is healthy, things open up down there. It hasn’t happened much this season, but we got a glimpse of what this team can be when at basically full strength.

Walker and Brown had been questionable leading up to Monday’s game but the team got a double shot of good news. Stevens was able to trot out his preferred starting 5 for only the 13th time in 42 games and also tightened his rotation to essentially eight players, leaning heavier on the top-sub combo of Enes Kanter and Marcus Smart instead of the batch of rookies he’s had to throw darts with lately.

Jayson Tatum (27 points 10/18), Kemba Walker (20 points 8/13), Jaylen Brown (20 points 6/14), and Gordon Hayward (16 points 6/12) were all able to contribute on offense and it made for a balanced attack. When all 4 are humming like they were on Monday the Celtics are a handful to deal with. It helps their secondary pieces as well since there’s more of a focus on the top guys. Lastly, it opens up Brad Stevens’ play calls as he can get creative with all of the versatility at his finger tips.

Jayson Tatum also was asked about the Celtics reintegrating all of their artillery in the lineup.

“Just much more dynamic,” said Tatum, who scored a game-high 27 points in 29 minutes, then declared that his dunk over James in Game 7 of the 2018 Eastern Conference finals was still better than Brown’s jam.

“I feel like we’re tougher to guard when myself, JB, Kemba, Smart, when everybody’s out there. It makes it tougher for the other teams to guard and it makes it easier for all of us with so many guys that can do so many different things out there. Hopefully we can continue to stay healthy. Obviously, we’d love to have Rob [Williams] back, but we’ll keep it rolling until he gets back.”

Before we go on about Tatum’s quote: I’d be doing a disservice to everybody if I didn’t drop this tweet in here.

Young C’s keep meeting The King at the rim 💥 pic.twitter.com/6iDoHVFmQJ

I want this tattooed on my face and I wanted it yesterday. Now, back to your regularly scheduled programming.

Tatum hit the nail right on the head, this team has so many more options when everyone is available and they’re one of the more unique covers in the NBA at full strength. No one in the league has as much depth as they do on the wing and coupled with Kemba Walker at the point, things are tough for opposing defenses.

While health isn’t something that can be predicted and usually hits you in the face like a ton of bricks, hopefully this marks the end of the Hospital Celtics and the beginning of one of the best stretches of the season.

Members of Delonte West’s past are trying to help the troubled former NBA star after another alarming incident.

Jameer Nelson, West’s college teammate at Saint Joseph’s, and former St. Joseph’s coach Phil Martelli made their concerns known on Twitter after video surfaced of West in handcuffs after appearing to be beaten up on a road. West says in one video that someone approached him with a gun. TMZ reports West’s former agent Aaron Goodwin confirmed West was involved in the altercation and needs medical attention but is recovering from the attack.

“I’m sick today [sic] my stomach right now seeing the videos of Delonte,” Nelson wrote of West, who was diagnosed with bipolar disorder in 2008. “To answer everybody that’s reaching out to me about his situation… all we can do is pray for Him and his family and hope that he seeks the proper help. Mental illness is something that a lot of people deal with and don’t even know it, until sometimes it’s too late. I’m not sure what exactly is going on with Dwest but he knows I’m in his corner and will help him get through this.

After a video dropped of Delonte West (it’s in the article referenced above) on the side of the road bruised, beaten, and incoherent, the NBA world reacted. Many different players voiced their disappointment and need for the league to get Delonte the help he needs. As someone who grew up watching West, this is all pretty disheartening. To see someone who was succeeding on the biggest stage ending up like this is always devastating. Hopefully the league can step in and give him the help he needs cause he for certain could use it.

And Finally: Danny Ainge is DONE with Chipotle?

Take some time to enjoy this exchange between Danny Ainge, Marcus Smart, and Mike Zarren.

This is Game of Thrones level scandal.

Boston Sports Journal: An overlooked aspect of the Celtics’ dominant win over the Lakers

MassLive: 8 things we learned from Celtics vs. Lakers

NBC Sports Boston: As Grizzlies arrive on rise, the value of their pick Celtics falls