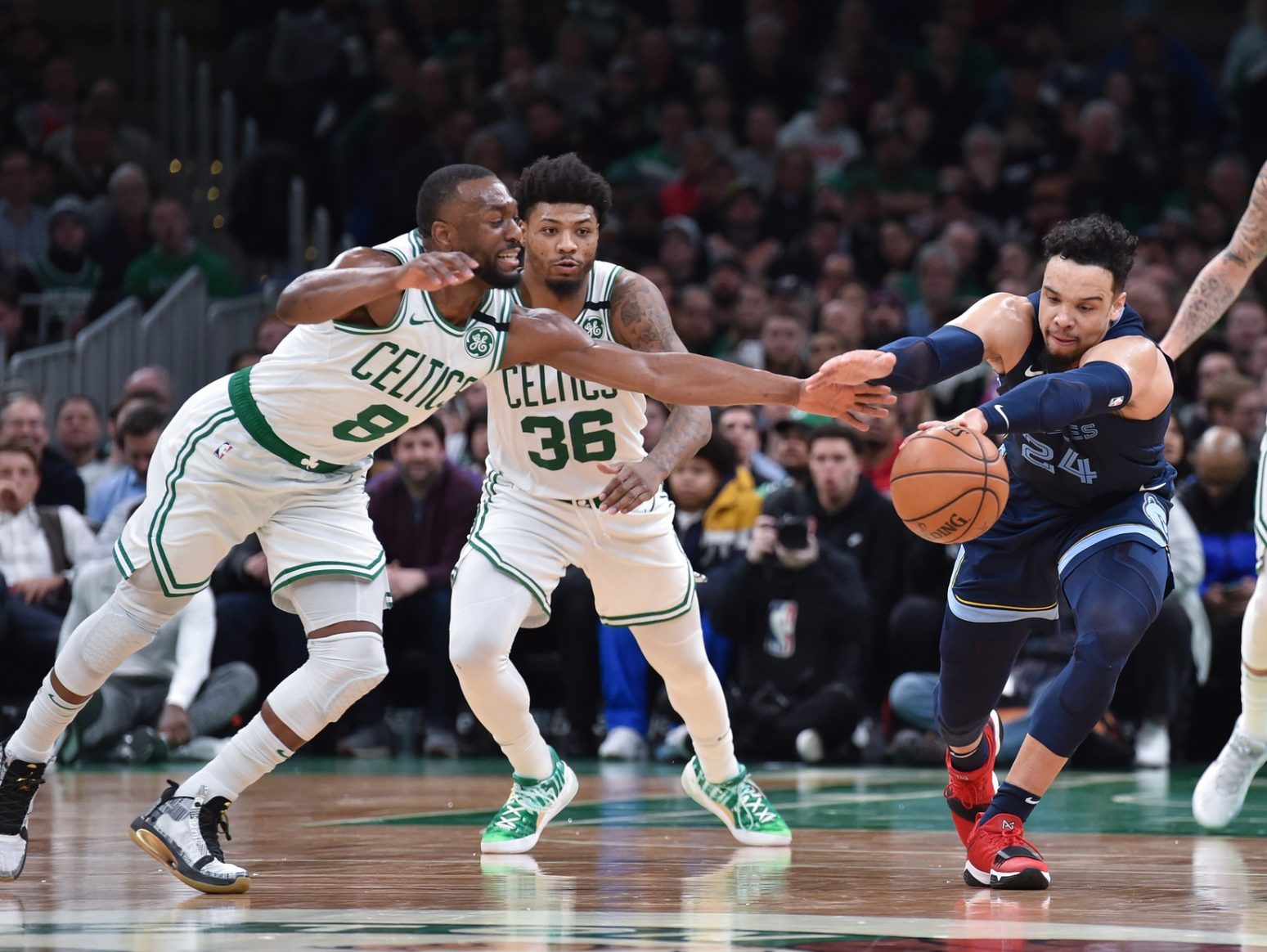 The Celtics kept the giddy momentum of their massive win in L.A. alive with a similarly dominant victory over another Western Conference playoff team (albeit more a scrappy upstart in the Grizzlies, as opposed to the powerhouse Lakers). Let’s look more closely at how it went down:

Defense was the key
I mean…offense certainly means a hell of a lot in any matchup where a team has a half-dozen double-figure scorers, shoots 54% for the game and holds a 30-plus-point lead for about half a quarter. But defense is why Boston was able to reach that mountaintop in the first place.

The Celtics only narrowly out-rebounded the Grizz (44 to 40), but also bested them in blocks (9 to 8), steals (11 to 7) and turnovers (9 to 16). Even a cursory look at footage from the contest will tell you how discombobulated Boston’s physical, deflection-heavy defense had Memphis: They packed the paint so that Ja Morant had no driving lanes to mount his brutally effective rim attack or to kick out for shooters, making the potential Rookie of the Year a complete non-factor in one of his worst performances yet. Only Jonas Valanciunas could bully through to buckets that were ultimately empty. The defense also forced bad shots out of players like Jae Crowder and Dillon Brooks who absolutely crumble when their attempts aren’t falling.

Tatum and his two-way excellence
All things being equal, Jaylen Brown, absent for this game, is probably the Celtics’ best two-way player. But Jayson Tatum is not that far behind his running buddy on defense. He played a significant role in the aggressive defense that cut Memphis off at the knees and made room for the huge runs that blew the game open—while also being the primary blow-opener, scoring 16 of his 23 points in the second quarter.

Some of the January losses this team have been characterized by Tatum evincing his biggest weaknesses, so last night was a welcome showcase for the full spectrum of his strengths. Let’s hope that groin injury ends up not being a big deal.

Time to talk about Theis
I’ve always noted Daniel Theis’s key contributions in game recaps, but that format doesn’t allow for much dwelling. And the German Chancellor deserves, of late, to be dwelled upon: Theis has shown out impressively even in some of the recent losses. He is Boston’s starting center because he’s earned the damn spot, even if his raw box scores haven’t always reflected a starter’s numbers…but they’re starting to reflect it as his offensive confidence and versatility rise.

This game perfectly exemplified what I’m talking about, with Theis battling his way to 14 points, 4 rebounds, 2 assists, 2 steals and 3 blocks. Theis found ways to score both inside and outside the paint, taking the Grizz’s bigger defenders—particularly Jonas Valanciunas—to task for their inability to stick with him. (JV managed to get his double-double on the other end, it’s true, but Boston neutralized Memphis’s overall scoring so thoroughly that it didn’t matter.)

Slow starts don’t have to be a big deal
All season long, Boston has had issues with scoring efficiently in first quarters—in both wins and losses. It’s been particularly ugly in several of the recent defeats, especially against Milwaukee. But it isn’t an automatic death knell. How these early deficits affect the final outcome depends on how the team regroups from those holes (or fails to).

In this one, the Celtics (and Brad Stevens) quickly realized that they could neutralize the pace-and-space attack Grizzlies coach Taylor Jenkins usually deploys, often to great success against teams who go in underestimating him and his players. Whatever faults Stevens may have, underestimating opponents is not one of them, and after the surprise of the initial Grizz punch, he and the team saw ways around it and executed with aplomb, led by Tatum’s instincts on offense.

Kemba’s low-scoring game didn’t matter
Early on, it became clear it just wasn’t a good night for Kemba Walker on offense. He’d end up going 2-for-9 (22%) with just 8 points, and didn’t sink a field goal until 7:53 in the third quarter.

Yet he still contributed to the win—on defense and as a playmaker. Walker racked up 4 dimes before the aforementioned made field goal, and also got 2 steals and blocks, one of the latter a particularly impressive denial of a would-be layup by the much larger Jackson Jr. Things like this speak to the way Walker’s game is expanding as a Celtic, and will be almost as pivotal to this squad’s playoff run as his usual scoring.