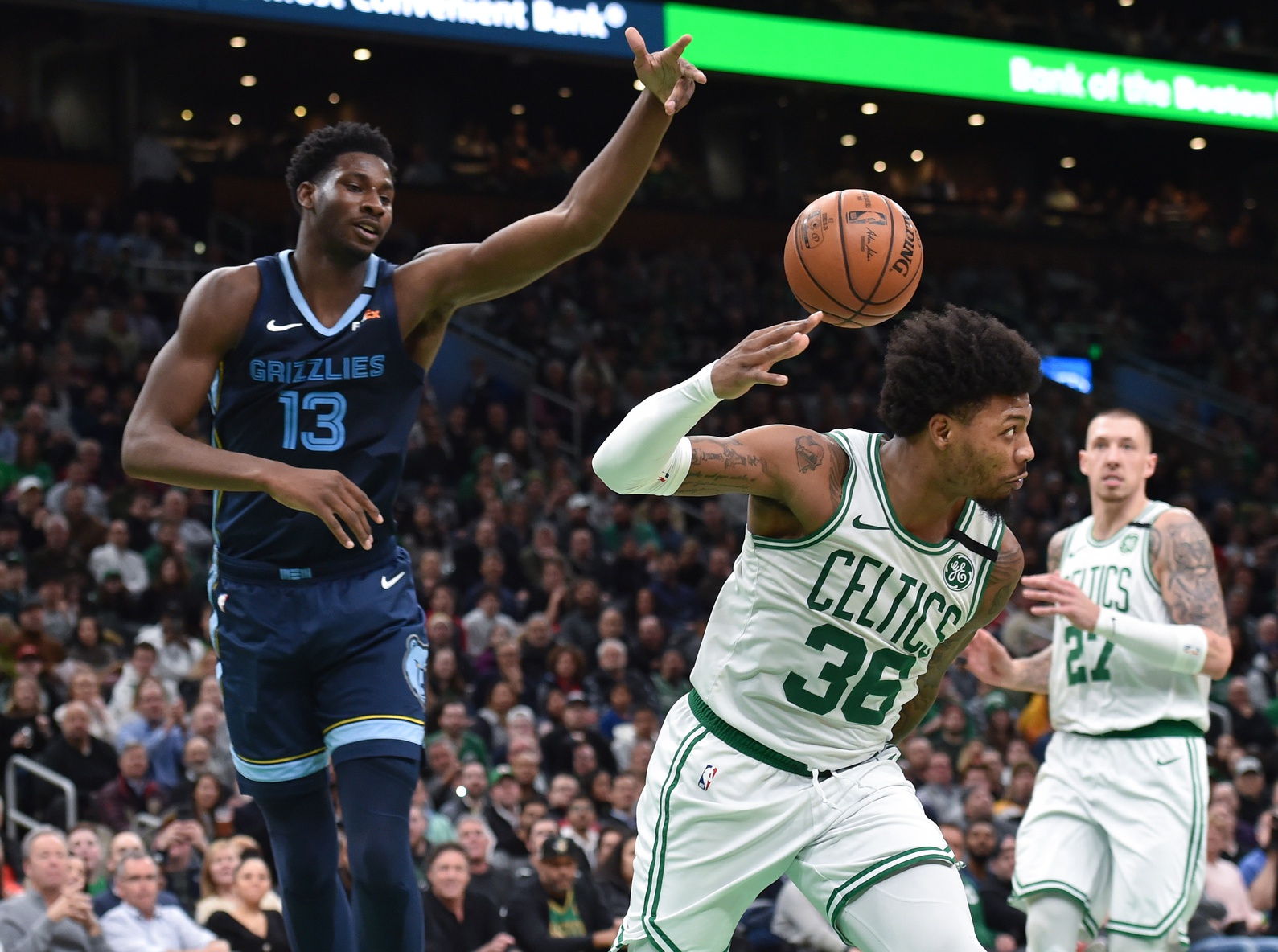 This is the type of win you feel good about. After drubbing the Lakers Monday night, the Celtics came out and scorched the Memphis Grizzlies in a building-block win that has everyone breathing a small sigh of relief. This is the Celtics team we have been expecting all year.

It’s a classic story but a script the Celtics have struggled to follow during their January swoon. Over the past two games, though, the Celtics have ramped up the defensive intensity, and it has resulted in game-breaking runs. In this one, Boston scored 23 straight points to bury the Grizzlies by halftime.

“I thought that once we finally got some stops in a row, we kind of broke the game open,” Hayward said. “It was definitely close in the first, but I thought we just kept our poise and kept playing. We were playing hard and then we kind of broke it open and I think it was consecutive stops that led to easy buckets.”

“They brought it defensively tonight,” said Grizzlies head coach Taylor Jenkins. “They just got into the ball a lot more, they were in the passing lanes, the driving lanes; we just couldn’t seem to find the open guy or just hold on to the ball. That just seemed to spark their transition, when we did get open shots they rushed us into our shots.”

Make no mistake, this win was sparked by defense. Yes, the Celtics shot 50% from the field and almost 44% from downtown, but many of their 119 points came on open looks caused by turnovers. Side note: Ja Morant, rookie phenom only scored two points on one-for-five shooting. This is the defensive identify the Celtics were lacking over the past three weeks, and it is the cornerstone of their brand of basketball.

The best part of the win last night is that the players were having fun. Every dunk got an over-exaggerated reaction from the bench, and every sweet pass heralded “Oooh’s” from the crowd. Everyone was getting in on the action, from Smart to Theis. Even in garbage time, the Celtics didn’t let up, letting rookie Carsen Edwards begin to regain his shooting touch (seven points in 12 minutes) and Vincent Poirier boost his PPG total to 1.8 on the season.

It wasn’t all roses. Jayson Tatum limped off in the 3rd quarter after suffering a right groin strain.

The level of worry lowered after that, though. Tatum walked back out to the court still in uniform and watched most of the fourth quarter from the bench. He did not even have a visible limp when he went back to the locker room after the game, even stopping to take off his sneakers and give them to a fan. Tatum was not available to speak to reporters, but Stevens was optimistic.

“It didn’t sound like it was too bad,” Stevens said. “I’m not too concerned about it. He’ll get a test tonight, just to make sure. We’ll figure out more tomorrow when we travel [to Orlando].”

I’m no doctor, but I wouldn’t be surprised if Tatum misses a game or two.

On Page 2: Kemba and his “Brothers”

Kemba Walker only scored eight points last night and was the only starter in double figures. However, it doesn’t seem that his lack of points has bothered him in the slightest. In fact, Kemba has been all smiles during these back-to-back wins, and has selflessly shown that he cares more about his teammates than any individual statistics.

Walker, who had eight points on 2-for-9 shooting with four assists, three rebounds and two blocked shots, has embraced the fact that he will have nights when the opposing team will make it tougher than usual for him to score the way he’s accustomed to.

Rather than forcing the issue, Walker makes contributing in other ways – like setting good screens, making the “hockey assist” or blocking shots – a more central part of his game.

“We have so many threats on the perimeter,” Walker said. “And you know, every night is not going to be a great night for me. The special thing about this team is, multiple guys can have huge nights. When it’s not my night, it’s just not my night. And I’m definitely willing to accept that.

Walker added, “When I’m not playing at my best offensively, I have to do other things in order to help this team win. I just try to bring enthusiasm, energy, just great leadership to the game.”

Not only does he make an impact on the court, but off the court, Kemba has been instrumental in the development of Tatum, Brown, Smart, and the rookies.

Kemba on being a big-time player who empowers guys around him: "It's my teammates. It's easy. It's my brothers. I want to see them succeed. I want them to be at their best. I've had a pretty good career so far, but I'm also here to help and just really get guys to another level."

This is the leadership the Celtics have been lacking the past few seasons. Despite some rough patches, Kemba has won over Boston’s heart and adopted what it means to be a true Celtic.

Globe: Celtics use 52-12 run to maul Grizzlies in blowout

MassLive: Marcus Smart flashes fancy passing for Boston Celtics: ‘That’s what I do, I’m a playmaker’

NBCSN: Grizzlies-Celtics Instant Overreactions: Are C’s officially back on track?