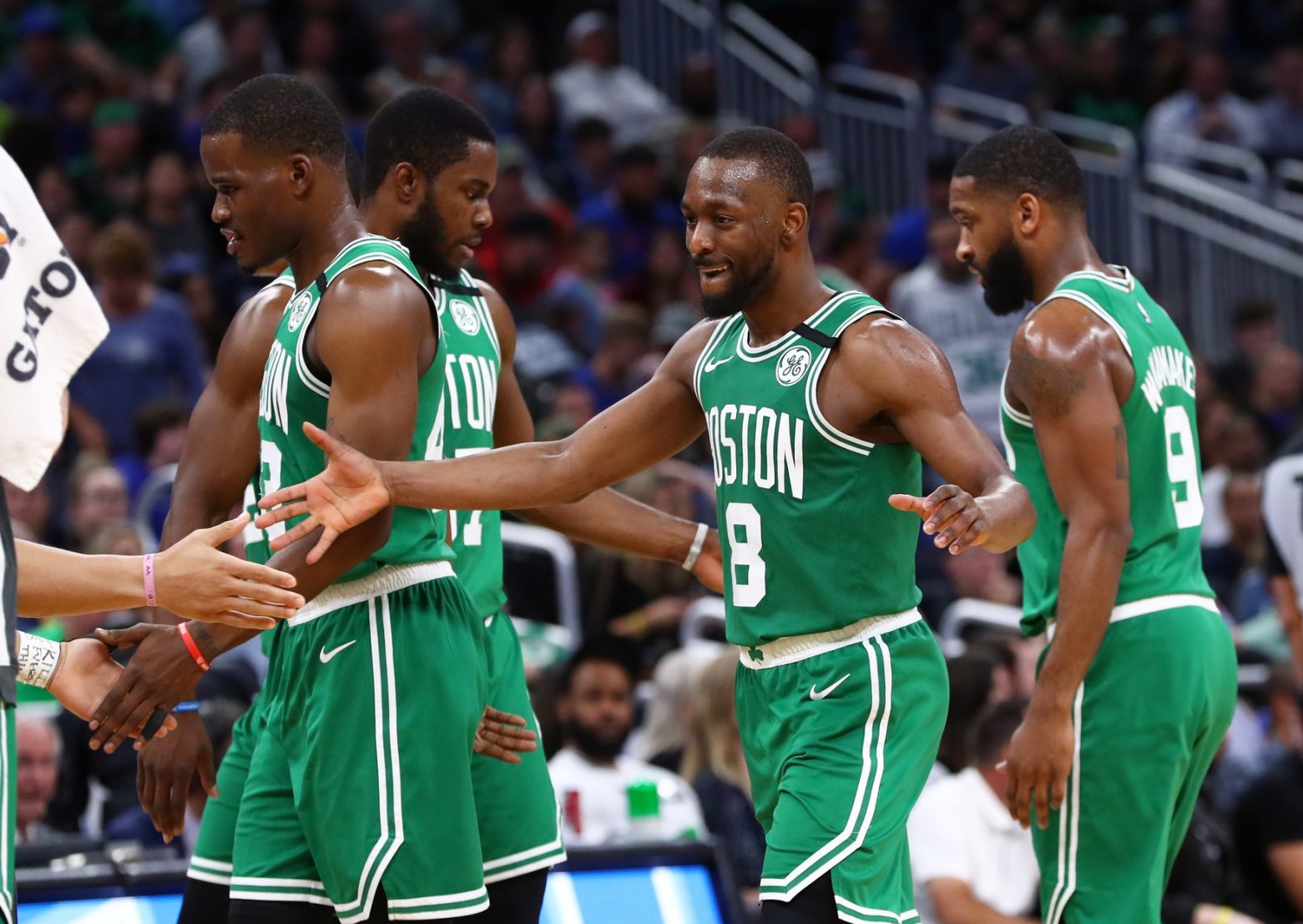 What do you do when you’re down two Jays and you fall 16 points behind to a flawed but hungry team in the form of the Orlando Magic? If you’re the Boston Celtics, well, you remember, “Oh yeah, we still have an Actual Superstar,” and let him cook. Kemba Walker delivered one of his sharpest scoring attacks of the season just two nights removed from an eight-point dud, canning 12-of-19 (including 6 made threes) for 37 points, plus 2 boards, 6 assists, 4 steals and a block. He kept Boston’s blood flowing even while the rest of the team was offensively out of whack.

Gordon Hayward also looked far more confident than he had in some of the January losses, particularly close to the basket, as his 22-14-5-1 line demonstrates (that’s a career high in rebounds for Gordo). And while Daniel Theis (16-6-4) didn’t always have the most comfortable matchup against Nikola Vucevic, he proved vital to sealing the victory on both ends.

Celtics have scored on their first 6 trips.
5 on the first shot, and the 6th on a Smart 3 after an offensive rebound.

Gordon Hayward seems to be aggressively looking for his shot, which he should be doing with both Jaylen & Jayson out

Marcus uses his leg strength way more than he used to on his 3’s. And it helps his follow through. Much improved shot form.

On some side notes, opinions differ about Carsen:

With the way C's bench offense looks, Carsen Edwards deserves a shot at some point.

He’s ass in every arena besides Quickenloans or whatever it’s called now https://t.co/ouBfIL5qnX

And, a question worth asking:

A key ingredient to Orlando’s success overall: Terrence Ross has recovered from his early-season slumber and is cooking again.

I think I saw a demon

(That’s my podcast partner on the ground in Orlando there. Please check out THE ILLEGAL SCREEN, available on all major providers.)

Only the force of scoring will within Kemba kept the Celtics from falling way too far behind during Q2. He had 27 in the first half alone, and eventually the luck started spreading out:

This all trimmed Orlando’s lead, which was 6 points at Q1 and had ranged as high as 16, to a mere possession: 57-53 Magic at the half.

We are down bc I fell asleep. I will Post us out of down four

Brad Stevens whipped out what’s become one of his signature tricks this season when the second half began: weird opposing offenses the hell out with a variation on zone defense (usually 2-3, but not always). It didn’t stop the Magic from scoring but seriously messed with their pace and rhythm. On the other side of the ball:

2nd game of the season with multiple 3's for Grant Williams

Every time you say we need a center, Grant becomes more powerful

many people are saying grant williams is an all-NBA player

(Obviously that’s overkill but let me laugh a bit.)

OK, now I’m done. Meanwhile, Orlando stayed alive because Vucevic is a guaranteed double-double and could push Daniel Theis around a bit. But, like, who cares, because we got this:

And although Theis wasn’t quite the defensive maestro he’s been of late against a center with well-documented scoring bona fides and a size advantage, offensively he came to get down:

Hayward to Theis on the leak out and Boston has the lead 70-69.

Also worth noting that Hayward was very much back on after a handful of so-so (and occasionally legitimately bad) games:

The fourth quarter was something of a mixed bag. Boston built up their lead to double digits, then began slipping somewhat and letting Fournier get going again—never a good thing, because he’s known to have his hot streaks against the Celtics:

The Celtics had a couple empty possessions right after Kemba checked out and Kemba stood up from the bench as Brad walked his way like 'Hey what's up Brad' and Brad sent him in.

Theis would end up being part of the game’s restabilization, albeit not without some give and take:

Daniel Theis calling for the review after he was whistled for the offensive foul. I’m sorry to say, there was no way the #Celtics would’ve won that.

Daniel Theis has tied his season high in scoring with 16 points.

Between the game-long offensive dominance of Kemba and clutch late-stretch work from Theis and Smart, the Magic comeback was averted.

THIS is the Celtics effort we needed. Great win.

That’s an impressive win for the Celtics. Down 16, on the road, without Tatum, Brown and Kanter. Come out with a 109-98 win. Huge games from Kemba, Hayward and Theis. Confident shooting from Grant Williams. Solid way to start a road trip.