Did the Minnesota Wild 'Miss' with Matt Boldy? 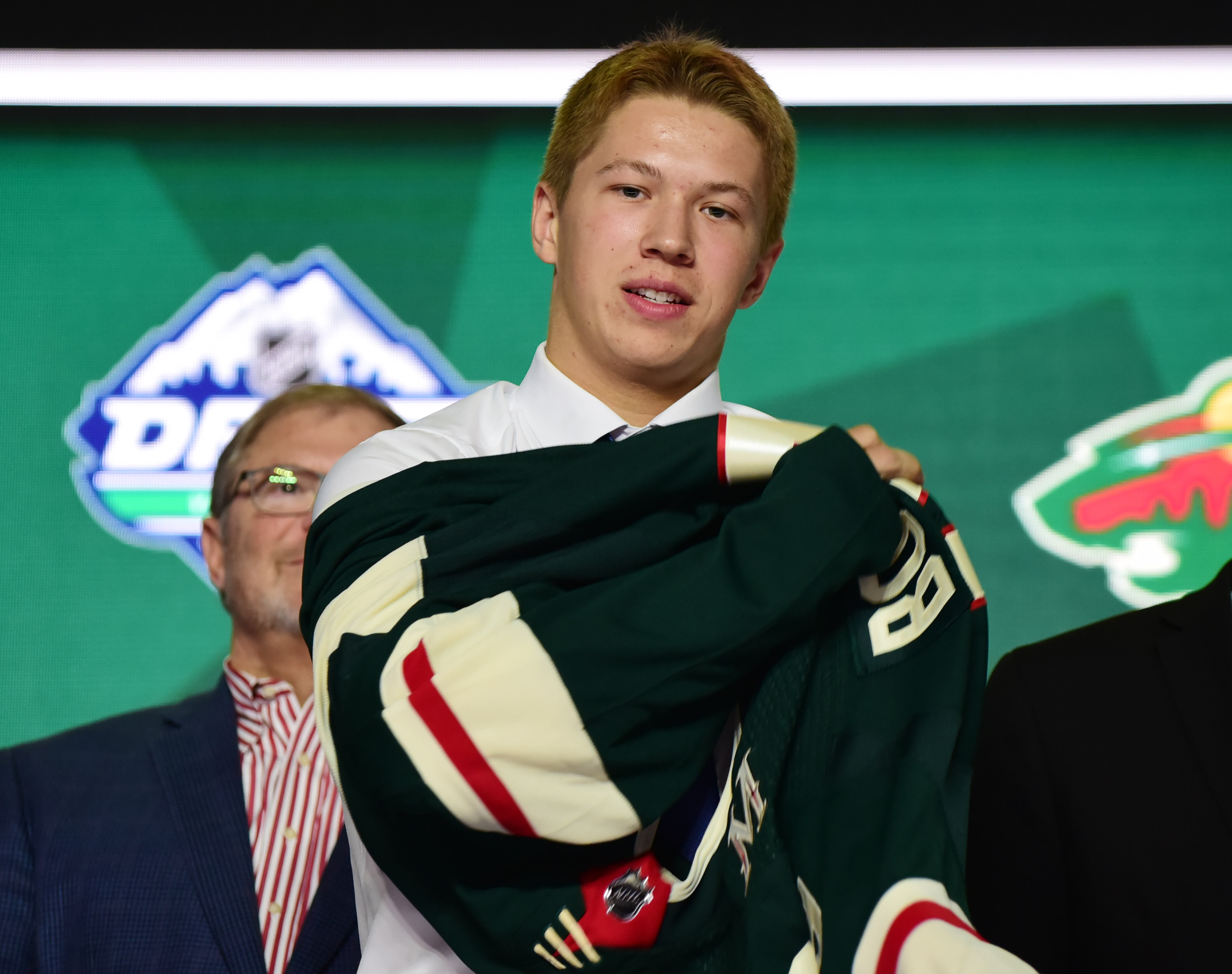 Did the Minnesota Wild 'Miss' with Matt Boldy?

With the NHL All Star Game behind us, teams look towards the last 1/3rd of the season and the grind that it will be as clubs scratch and claw their way towards the playoffs.  While many Minnesota Wild fans may be caught up in looking at the schedule and seeing whether there is a chance the team could go on a bit of a run, my focus is at the long-term future of the club.  More specifically, my mind is more on the future players in this organization, i.e. its prospect pool.

Like a few Wild blogs out there, I spend time regularly keeping track of the progress of the team’s collection of young players not in the NHL.  Unlike the NFL, where when you draft a player you often see them playing that upcoming season in the NHL its often years before they make their NHL debut.  Very few NHL draftees end up playing a big role for the teams that drafted them that first fall.  The higher a player is drafted (closer to being taken 1st Overall), whether its fair or not the expectation level among the fans is raised.  They expect that player to be an impact player where they will be a cornerstone of the franchise for the forseeable future.  When the Minnesota Wild selected Matthew Boldy with the 12th Overall pick in 2019 fans were excited to hear about a player who was TSN‘s Craig Button‘s ‘man crush’ a player who he felt was really special.  If you read the included quotes from various scouting publications on eliteprospects.com you could see why some fans were pretty excited about him.

“He has a unique-blend of size, skill, anticipation and vision,” ~ Hockeyprospect.com 2019

“The wrist shot is heavy and whippy, and simply deadly from all angles. He can score from a distance, or from in tight,” ~ McKeen’s Hockey 2019

It is that last quote from McKeen‘s that might raise a few eyebrows these days when you look at what Matthew Boldy has managed to do in his freshman season at Boston College.  His current stat line seems to be a far cry compared to what he had been doing with the U.S. National Development Program.

As you can see he was a well over a point per game player both in his play against Jr. A competition and in exhibition games against quality division 1 college teams going into his draft year.  But for whatever reason he’s scoring at a half-point per game pace and goals have been few and far between.  As the season has rolled on I’ve seen plenty of rationalizations about Boldy’s sluggish start.  Let’s take a look at those rationalizations one by one.

Rationalization #1:  “He’s only 18-years old transitioning from Jr. A to college hockey.”

I could go on and on, but that would simply be card stacking.  But clearly, there have been plenty of other players from his draft class making that same jump who are having considerably more success.  Perhaps his scoring from his time with the USNDT was a result of inflation due to the fact that team often kept its top talent on the ice in blowout games.

Rationalization #2: “He’s not getting the same opportunities he had with the U.S. National Development program.”

That might be true if you were talking about his chances to play in international tournaments as he was notably left off Team USA’s World Junior Championships squad this winter.  However, for most of the season, Boldy has been playing on Boston College’s 2nd line.  Boston College Head Coach Jerry York, recently inducted into the Hockey Hall of Fame isn’t going to put Boldy on the 2nd line just for kicks or simply because he was a 1st round pick, its because that’s where he feels he belongs.  This often leads to the next rationalization.

Rationalization #3:  “He started the season playing center, which isn’t his natural position which kept him from having the same amount of scoring chances as he was used to playing on the wing.”

In the words of Levar Burton on Reading Rainbow, ‘don’t take my word for it.’  How about this tweet from the Athletic and 10k Rinks podcast co-host Tony Abbott.

He hasn't been taking faceoffs for a while, and most takes I've seen have suggested that playing center wasn't holding him back.

If you take a look at the amount of shots Boldy has, whether its on the wing or at center he’s been shooting the puck a lot.  In fact, he’s tied for 2nd on Boston College in shots on goal with 74.

Let’s take a quick look through that group of players I listed above to see how that compares.

So as you can see, Boldy has the 2nd most shots on this list yet he has the fewest points by a significant margin.  In Boldy’s most recent game, a 4-3 overtime loss to Maine the Millis, Massachusetts-native had no goals on 9 shots.  Ouch.

When you consider many Wild fans were hoping the team was going to draft Cole Caufield, it certainly stings to see him among college hockey’s top snipers.  He has managed to chip in some more assists since moving from center to wing, but its tough not to draw a comparison between the two players when Boldy nets 3 assists for the weekend while Caufield nets a hat trick.  Hmm..

Matt Boldy with a 3 assist weekend. No goals on 15 shots for the weekend... It's truly in "you gotta be fuckin kidding me" territory.

Some people might be dismissive of his struggles, but to me it seems to be a bit troubling.  The Athletic‘s Cory Pronman suggested that its a bit early to get too worried about Boldy’s struggles and that he is still bullish on the player whom he identified as the 23rd best not-yet-in-the-NHL prospect (Caufield was ranked #4 by the way, Kirill Kaprizov was ranked #9).  Yet even in Pronman’s description of Boldy’s season he acknowledged some experts were having their doubts and suggesting he may have been overrated.

At some point, the results better come around soon.  He certainly has had the volume of opportunities but the comparisons are valid as the draft group are all playing for solid NCAA programs playing against virtually identical competition.

I feel I’ve done a fair job at addressing the common rationalizations about Boldy’s game, and I am not suggesting he’s a bust.  But I will say the Wild may have ‘missed’ when they selected him.  If he was expected to be a scoring winger, so far I’d say there is a fair reason to be concerned based on the results thus far.  Eliteprospects.com even suggested Boldy’s game had some flaws.

“Boldy is a highly skilled winger.  A finesse player with impressive creativity, a quick release and fine playmaking ability. Not the fastest of skaters, Boldy’s hockey sense and overall skill level still allows him to be reliable offensive threat.” ~  Eliteprospects, 2019

Most notably his lack of high-end speed and didn’t seem to get as much credit as a finisher which is partly why I didn’t place him in my Top 6 forwards for the 2019 NHL Draft.  The other major reason was I felt the Wild needed to draft a center.  With Eric Staal (35 years old) and Mikko Koivu (36 years old) it was imperative for the team to draft and develop a center to play in its Top 6 in the next few seasons.  Boldy started out playing center for the Eagles, but despite registering 4-5 shots per game he wasn’t producing.  He has at least contributed some helpers on the wing but doesn’t the organization kind of need him to be a center?

There were quality centers available when we selected him 12th Overall.  Boston College teammate an Avalanche draftee Alex Newhook has had a better start and has spent much of the season on the Eagles’ 3rd line.  Newhook doesn’t have the skating issues Boldy has and while he’s 5’9″ compared to 6’2″, the former BCHL star got credit for being a solidly-built 174lbs.  Major Junior center options Peyton Krebs, Philip Tomasino and Connor McMichael have had terrific seasons.  All of these players get credit for being tremendous puck distributors as well as being capable, effective scorers in their own right.

Boldy could not control where he was drafted and the ‘miss’ I am referring to in the title of this article is more directed at the Wild and their scouting staff than the player himself.  While the generic draft mantra is ‘taking the best player available’ at some point you have to address needs.  Boldy’s disappointing start is one thing, but perhaps more disappointing is the Wild’s inability to draft and fill a giant need in their organization.  A point-producing top 6 center.  It will be extremely difficult if not altogether impossible to fill that need via free agency let alone through trades.  So while some may feel like I’m taking Boldy more to task over his lack of scoring, the fact he wasn’t able to be the center the organization needed him to be is the biggest miss of them all.  Let me be clear, that’s on the Wild, not the player.  Boldy’s best suited to be a winger, the Wild was hoping he could be developed into a center and they will pay for that mistake in the long-term.

At some point, the rationalization stops and people accept the player as simply are what they are.  Wild fans waited for years for Charlie Coyle to break out to being a top 6 winger, but that never really happened.  He wasn’t able to establish enough consistency offensively to make that happen.  Joel Eriksson Ek continues to work his tail off but he hasn’t been able to find the back of the net enough to move him out of a bottom 6 role.  Benoit Pouliot and now Jordan Greenway can show us flashes of brilliance that make you wonder if they’re capable of being more, but to use a phrase a good friend of mine former HockeyBuzz writer Tony Dean liked to use, they failed to launch.  They couldn’t make that next step, no matter how hard they seemed to try.  Could Boldy catch fire and make me look foolish?  Sure, and I hope he does.  However, please forgive me if I feel like I’ve seen / heard this story once before.

What do you think?  Please let me know on Twitter @CreaseAndAssist or in the comment section below!