Final Grades for the 2019 Packers Offense by Position Group 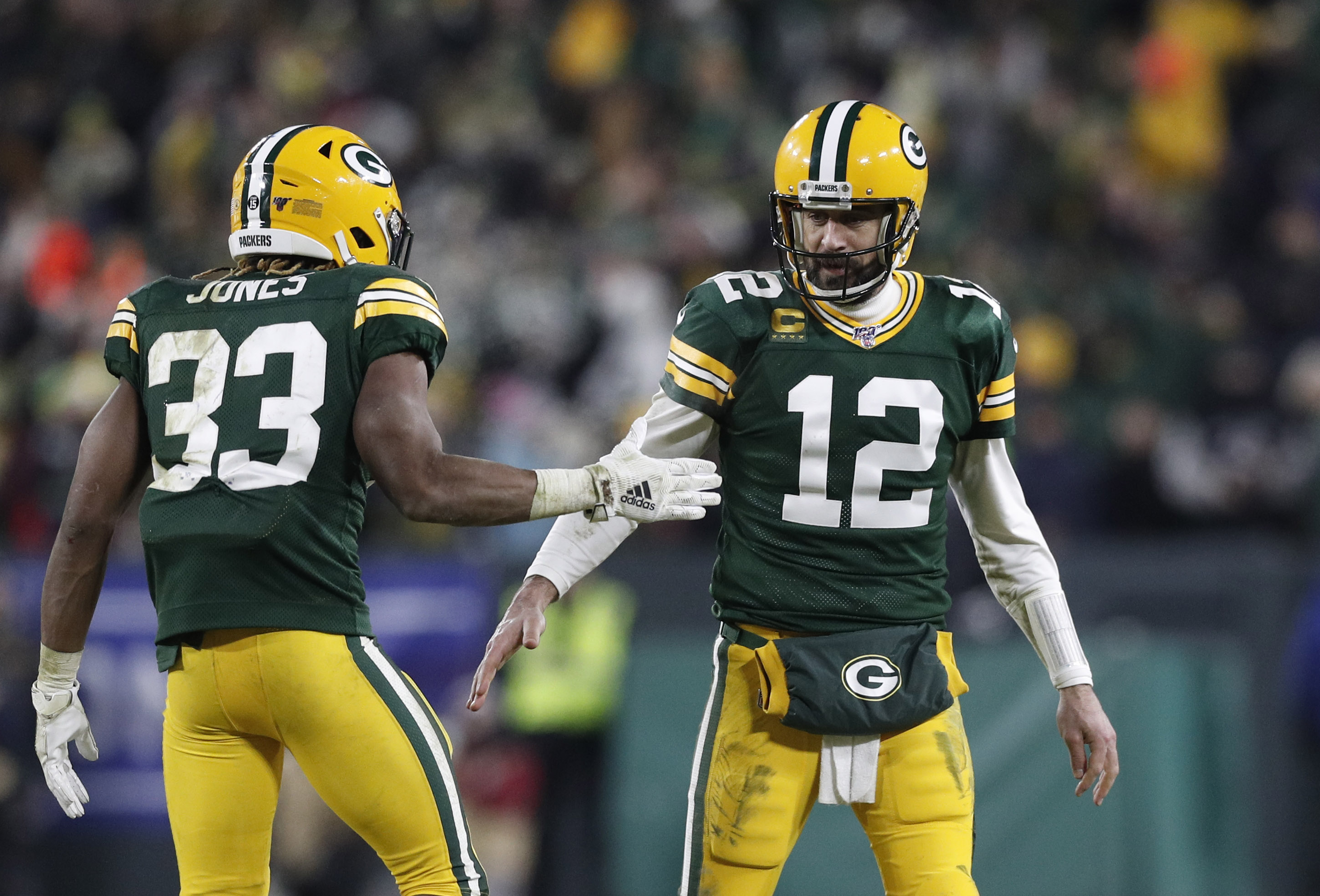 Final Grades for the 2019 Packers Offense by Position Group

The Green Bay Packers offense had an average year statistically, ranking 15th in rushing yards per game, 19th in passing yards per game and 19th in total yards. Somehow, the team managed to find ways to score points when they really needed to this season.

Still, the offense was inconsistent, sometimes within the same game. There were times where the offense started quickly using Matt LaFleur’s scripted plays and then faded (Week 2 vs. Minnesota) and occasions when the offense struggled early but picked things up late to eke out victories (the two games against Detroit, for example).

Here are the grades for the Packers offense in 2019. The marks are based on a combination of expectations and performance. Grades are listed for position with each player’s comments and analysis following inside each position group.

Aaron Rodgers faced several challenges entering this season. For the first time since taking over as the starter in 2008, he had to learn a new offense under a new coach. There was a learning curve but by the end of the season, Rodgers seemed more comfortable than he did early on.

The Packers franchise quarterback finished the season with a 62.0 percent completion Aaron Rodgerspercentage, 4,002 passing yards and 26 touchdown tosses against just four interceptions. His quarterback rating of 95.4 was a bit lower than usual in part due to his pedestrian 7.0 yards per attempt.

Rodgers had one nearly flawless game in the victory over the Oakland Raiders and came through in the clutch most of the time. He is still able to make plays that leave you wondering how he did that.

Rodgers did struggle with his accuracy again this season, missing open receivers or failing to throw to open receivers short while attempting to create a splash play downfield. It is clear he still doesn’t trust all his possible targets.

Rodgers is clearly not the player he was in 2011 or 2014, but he’s still a top 10 quarterback in this league who is more than capable of leading a team to the promised land.

Backup Tim Boyle saw limited action in three games, completing 3-of-4 passes for 15 yards. It is not clear at this point that he could take over as the starter for any length of time if anything ever happened to Rodgers.

Aaron Jones became the first Packers runner to gain more than 1,000 yards in a season since Eddie Lacy in 2014. Jones led the team with 1,084 yards rushing and a 4.6-yard average. He scored 16 rushing touchdowns and 19 touchdowns overall during the regular season, one shy of Ahman Green’s single season franchise record.

Jones also improved as a receiver, finishing second on the team with 49 catches for 474 yards and three scores.

Jones has worked hard to improve his blocking and receiving skills since his rookie season. His blocking is much better although he still struggles at times. He is now a dangerous receiver every time he gets his hands on the football.

Jamaal Williams added 460 yards and a 4.3-yard average in 14 games. He is a better blocker than Jones and a reliable inside runner who can also catch passes out of the backfield. Williams is the kind of player every coach loves because he is consistent and dedicated to the team’s success.

Rookie sixth-round pick Dexter Williams was active for four games and gained 11 yards on five carries. His blocking and receiving really kept him off the field and he must improve in these areas to see more action next season. He has already shown promise running the ball in preseason.

Tyler Ervin got involved in the offense a bit late in the season with one carry for 10 yards and two catches for 11 yards. His speed shows promise if the team elects to re-sign him.

Fullback Danny Vitale was mainly a blocker. He ran once for three yards and caught seven passes for 97 yards including a 27-yard pass. The Packers should be able to get Vitale more involved in the passing game next season.

Davante Adams played at a Pro Bowl level again this season in the 12 games he played. He was by far the best wideout on the roster, catching 83 passes for 997 yards and five touchdowns. Rodgers didn’t trust any other receiver nearly as much as he did Adams and with good cause. Adams is a precise route runner with great body control, size and hands.

Allen Lazard started the season on the bench and didn’t see any action on offense until Week 5 against Detroit. He finished the season as the team’s second receiver with 35 catches for 477 yards and three touchdowns. Rodgers trusts Lazard on third downs, often turning to him for key catches. Lazard has good size and hands and should continue to improve as he gains experience.

Geronimo Allison was expected to be the team’s slot receiver, but he was very inconsistent. He caught 34 passes for 287 yards and a pair of scores, but he dropped too many passes and disappeared for long stretches of time. Allison’s run blocking was solid, but his season was a disappointment overall and he may not be back in 2020.

Marquez Valdes-Scantling has more speed than any other Packers receiver but has not been able to get on the same page as Rodgers often enough. He got off to a strong start to the season with 16 catches in the first four games but had only 10 catches in the final 12 contests. MVS averaged a healthy 17.4-yards per catch this season and scored two touchdowns. The talent is clearly there but Valdes-Scantling must run more consistent routes and work on his chemistry with his quarterback to take his game to the next level.

Jake Kumerow made 12 catches for 219 yards and one score. He has good size but does not get consistent separation from good defensive backs. He is a role player and a good blocker for a wide receiver.

Equanimeous St. Brown spent the entire season on the injured reserve and should get another chance to show what he can do in training camp. Ryan Grant was signed as a free agent at midseason but never was active for a game.

Overall, this group behind Adams was inconsistent and in need of an upgrade.

Jimmy Graham had some moments this season, but they were few and far between. He can no longer gain separation from defenders with regularity and he drops too many passes. He finished the year with 38 catches for 447 yards and three touchdowns, numbers that didn’t even equal his disappointing 2018 campaign.

Graham has been a disappointment after signing a huge free agent deal with the Packers in 2018 and probably won’t be back with the team in 2020.

Marcedes Lewis is a good blocker and reliable receiver. He had 15 catches for 156 yards and a score. He also adds leadership in the locker room.

Injuries slowed Robert Tonyan’s development a bit. He missed five games and was slowed in others. He finished with 10 catches for 100 yards and a touchdown. Tonyan has improved his blocking but is still average at best at this aspect of the game.

Rookie Jace Sternberger missed the first half of the season on injured reserve but showed flashes of ability late in the season and in the playoffs. The Packers will be looking for a lot more from Sternberger and this position in 2020.

The offensive line remained healthy for most of the season with four of the five starters appearing in all 16 games this season. Left tackle David Bakhtiari got off to a slow start and took more penalties than usual but he still did a very good job protecting Rodgers and made the Pro Bowl. It was a below average season for him but still a very good performance overall.

Lane Taylor started the season at left guard but was injured and lost for the season in Week 2. Rookie Elgton Jenkins took over and had a strong first season. Jenkins did not allow a sack during the regular season and was a solid run blocker. He earned a spot on the all-rookie team and has a bright future as a fixture on the Green Bay offensive line.

Center Corey Linsley was reliable and consistent as always. He was called for only two penalties all season. Linsley is smart, tough and solid. He was overmatched in the regular season meeting against San Francisco but overall had another very good year.

Free agent addition Billy Turner solidified the right guard spot which was a revolving door in 2018. Turner is versatile and smart and a great influence in the locker room. He was called for only one penalty all year in 1,076 offensive snaps.

Bryan Bulaga had a strong season at right tackle. He started all 16 games during the regular season although he left two games early and was unavailable for the playoff game against Seattle due to illness. Bulaga was playing at a Pro Bowl level early in the year and had a very good season overall. He is an unrestricted free agent this year and his return is a key to keeping Rodgers upright in 2020 and beyond.

Jared Veldheer stepped up and provided reliable play as the swing tackle late in the season and in the playoffs. The team didn’t miss a beat when he filled in for Bulaga in the season finale and the opening playoff matchup.

Alex Light filled in for three games and looked ok against Kansas City but really struggled against San Francisco in November. He will have to improve his game to stick around in 2020.

Backup center and guard Lucas Patrick was a solid fill-in when Linsley missed parts of two games. Patrick is tough, hard-working and a reliable backup. He played in 13 percent of the team’s offensive snaps this season.

This unit did a better job of run blocking this season and allowed 36 sacks in 16 games, which isn’t too bad considering Rodgers’ tendency to hold the ball while attempting to extend plays.