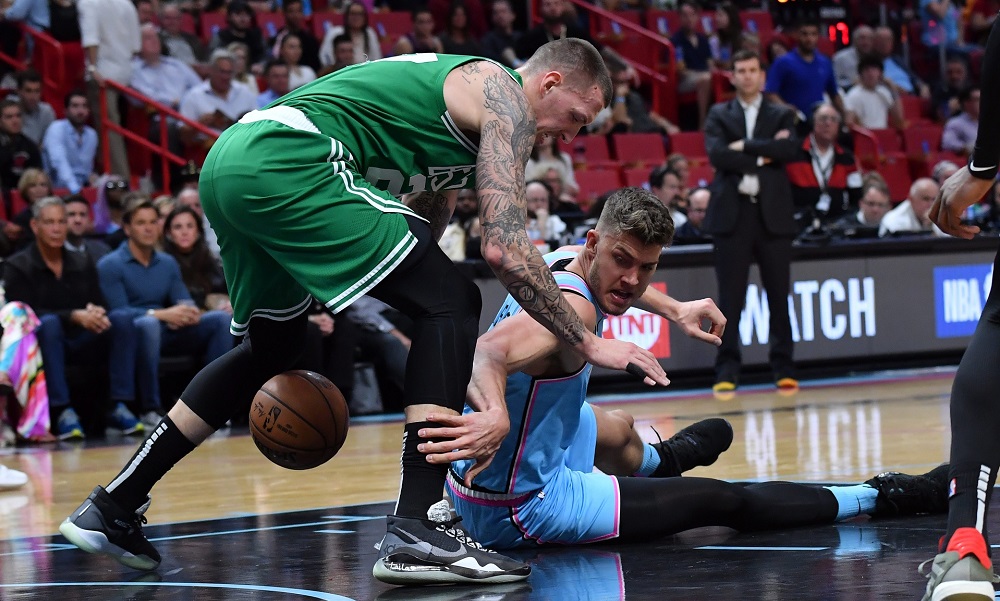 The Miami Heat have been one of the best home teams this season, having lost just twice before facing the visiting Celtics on Tuesday.

Now they have three losses. And the Celtics are 2-0 against the Heat this season and at 31-15 are just one-half game back of them in the standings.

Gordon Hayward and Jaylen Brown combined for 54 points on 20-of-30 shooting, and Daniel Theis added 10 points and 11 rebounds, leading the Celtics to a 109-101 in Miami. Kemba Walker and Marcus Smart struggled with their shooting (combined 8-of-32) but came through with key plays in crunch time. The Heat kept the game close throughout, but the Celts led almost the entire way.

Boston was still without Jayson Tatum and Enes Kanter, and Javonte Green was also out. Miami was on the second night of a back-to-back and was without starting point guard Kendrick Nunn.

A nice but double-edged look at the quick start the Celtics got off to:

The Celtics open the game with eight points in the first 69 seconds to force a quick Heat timeout. The Lakers did the same thing to the Celtics last week … and then lost by a billion.

Indeed, Miami went on a mini-run after Boston pushed it from 8-0 to 13-4, quickly getting themselves into the double digits. The Cs stuck closely enough to the Heat on the defensive end of things and rode strong offense from Jaylen and Gordon to keep the gap alive.

It wasn’t all roses, of course:

Unforced turnover off an ATO. Stevens might commit murder at the quarter break.

But a quick pair of Kemba jumpers brought the Cs to a solid lead at the end of the game’s first 12 minutes.

Dion Waiters, recently suspended after a fiasco with weed gummies, somehow wormed his way back into the Miami lineup and immediately started jacking long jumpers.

But seriously: If anything was going to be a negative X-factor (for the Celtics) it’d be Bam Adebayo. Moreover, Boston’s players in this quarter seemed utterly baffled by Erik Spoelstra ordering Miami to run standard zone defense:

They are way too passive. They need to get someone into the middle of it. https://t.co/JQXgJJrZ0S

While Miami has taken its first lead of the game, 41-40, halfway through the second quarter, Bam Adebayo has three fouls. Celtics would be wise to take to advantage of his absence, which likely will extend to the end of the first half.

It was more some bizarre goofy errors that kept Miami from holding their lead, not to mention defense like this:

Theis continuing his run of strong play over these past several games:

Great Theis seal to enable the Kemba And-1 pic.twitter.com/S5rFoj6UrQ

Kemba Walker back in the top 5 in charge takes this season. He’s up to 15, tied with Aron Baynes.

DEFENSIVE MAESTRO KEMBA WALKER; you love to see it but fear slightly for the integrity of his 6’1″ and 190 lb. frame.

Yet they still held a narrow 53-48 lead rolling into halftime. Something to ponder:

Celtics aren't converting, but they're doing the right thing getting Hayward & Smart in the middle of the Miami zone. It should be Hayward most of the time because of his passing and ability in the midrange

Third quarter had this pretty play.

This is a lowlight, but listen to Brad coaching.

You could hear Brad's displeasure on the broadcast when Jaylen left Duncan Robinson to close on Derrick Jones Jr. pic.twitter.com/VJpzsCBoel

Gordo and Jaylen combined for 17 points in the third quarter, which ended well.

Grant Williams just grabbed an offensive board and kicked it out for a 3 from Brad Wanamaker to end the quarter's scoring. Big play by the rook and the vet. Stevens doesn't appear to be budging off his eight-man rotation tonight.

Huge Grant offensive board and kickout to extend the Celtic lead to 4 at the end of 3 pic.twitter.com/3Egf0l3OsM

Fourth quarter, Grant had a putback that gave Boston an 8-point lead.

The offensive rebounds will show up though. https://t.co/Zxoez22crF

But the refs were picking on Grant, and Coach Stevens would have none of it.

Celtics are challenging the foul call on Grant Williams. This is a big deal because it's his 5th foul with 7:18 to play and he's been pretty key in holding off the Heat this quarter

Big time three from Kemba. Celtics needed that one.

Miami had closed to within 5 points with 2 minutes to play when Smart beat the shot clock with a crucial 3; stripped Adebayo’s layup attempt; then swatted out a Celtics miss to keep possession and force the Heat to foul.

Marcus Smart does Marcus Smart things. That was a hell of a tip out to basically seal this game.

After that sequence, the Cs led by 9 with just 27 seconds left. Ballgame.

Celtics pulling out this road win despite the starting backcourt going a combined 8-of-32 and no Tatum is very impressive. Heat were 21-2 at home before tonight.