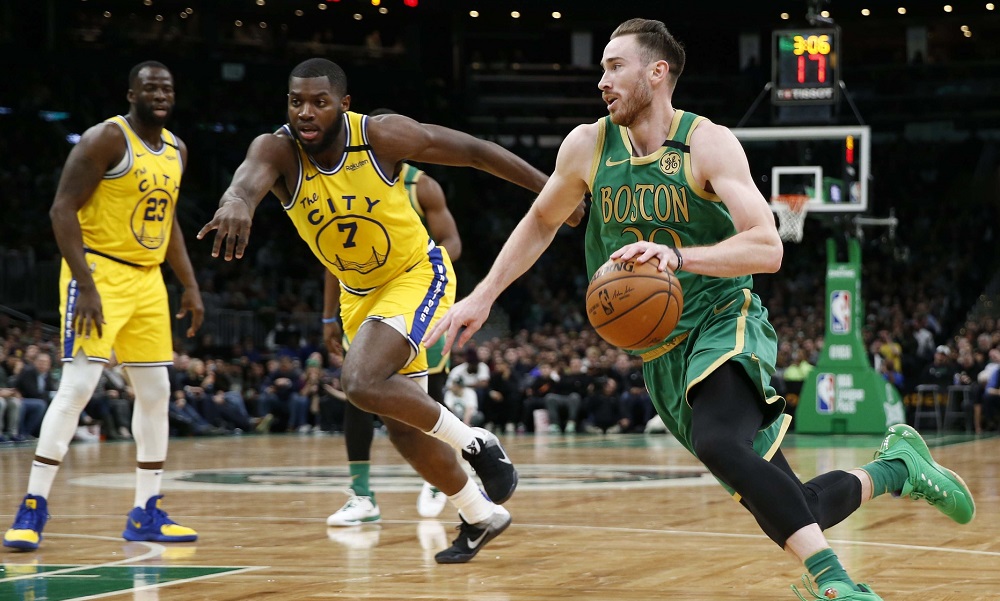 How the mighty have fallen. In previous years, a visit from Golden State would stir the Garden crowd into a frenzy, but due to injuries and defections, this season’s Warriors came in with a league-worst record of 10-38.

Although the Dubs hung around most of the game, in the end it was no contest. The Celtics took an early lead, won all four quarters, and led by as many as 19 in a 119-104 victory that brought their record to 32-15. Here’s the game in a nutshell.

The Celtics' best five players have combined for 97 points tonight.

The night began with good news on two fronts about a certain young wing:

#NEBHInjuryReport Jayson Tatum will play tonight and will be on a minutes restriction, per Brad Stevens

And in their first home game since Sunday:

The Boston Celtics pay tribute to Kobe Bryant, his daughter Gianna, and all of the lives lost on Sunday. pic.twitter.com/RTdw7ws6oo

Marcus Smart subs in and immediately makes something happen pic.twitter.com/eJEuX8eVwh

Best highlight from the quarter:

Second quarter, Celts’ defense was working and they started to pull away.

I am intrigued by the defensive potential of the Semi-Grant PF-C pairing. That is the whole tweet.

Grant to JT on the break ⭐️🔨 pic.twitter.com/maQP8ngJXm

Because you need something good right now:

Hero among us tonight is a 6 year-old who made tiny koalas to raise money for the Australia fires… and he ended up raising $280K.

Celtics responded with a 12-3 run, but D’Angelo Russell had a personal 8-0 run – an and-one, a triple and a pair of free throws. But then, at the halftime buzzer.

Third quarter, The Jays combined for the first 10 Boston points to push the lead back to 18.

Terrible call of the night:

Brad Stevens is going to challenge that call. Kemba Walker tried to take a charge, but he was called for a block. He appeared to take an elbow to the face from Draymond Green.

We all know, however: ball don’t lie.

Fourth straight 20-point game for Gordon Hayward, the first time he's done that as a Celtic

Smart also went on a tear; this was his third straight triple of the quarter.

Jayson Tatum (20 PTS) with the fake, foot-work, and floater on TNT. pic.twitter.com/PoRB0AfnAF

Whereas last year it felt like the worst possible thing would happen at every possible turn, it seems every time things even start to get remotely bad this year, Marcus Smart hits a 3

Marcus Smart is once again the greatest shooter who ever lived.

Kemba added 13 points on just 5-of-13 shooting. Jaylen scored 18 but fouled out (victimized by some weak calls, truth be told).

And now in the final minutes, a "Kobe, Kobe" chant breaks out.