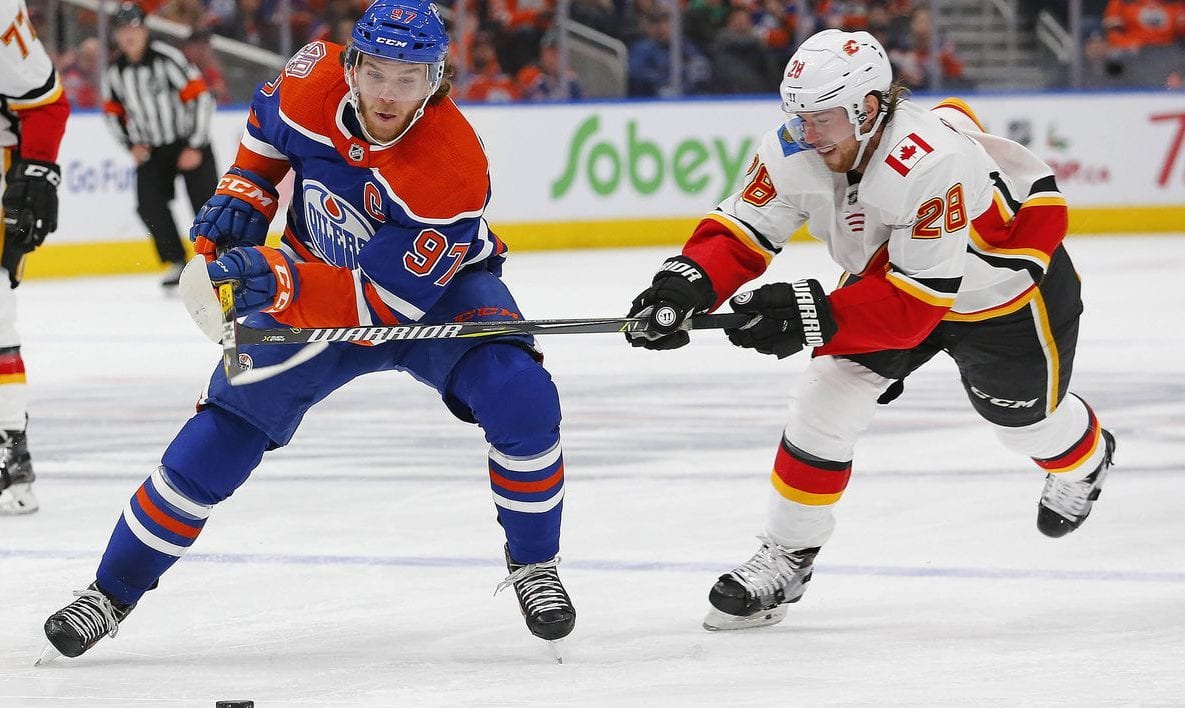 Ring the bell, it’s time for round four of the Battle of Alberta! Tonight, the Oilers look to complete a back-to-back sweep as they visit the Calgary Flames. It is the fourth of five meetings between the teams this season. It is the second of three games that will take place in Calgary. The finale is set for April 4th.

The Oilers scored a key 4-2 victory last night over the St. Louis Blues. Leon Draisaitl paced the club with two goals, while Caleb Jones and Josh Archibald chipped in with tallies. The Flames have been off since Wednesday’s win in Edmonton.

Mike Smith starts for the Oilers, while David Rittich gets the go for the Flames.

Edmonton: A quick start is key. The Oilers are 0-2-1 against the Flames this season and have fallen behind early in all three games. They cannot afford to chase the game against their rivals yet again. Be ready to go from the get-go, or risk another long night against the hated rivals.

Calgary: Play physical and keep getting under Edmonton’s skin. The Flames have a nasty habit of annoying the Oilers to the point where Edmonton takes bad penalties and gets out of their game. Keep walking that line and the Flames should be able to play this game on their terms.

Edmonton: Ryan Nugent-Hopkins has enjoyed quite a month. RNH has 16 points (6-10-16) in his last ten games played and has found a nice spot alongside Draisaitl and Kailer Yamamoto. He’s also had some nice success against the Flames this season. Can RNH keep that trend going? It would go a long way towards a win if he could.

Calgary: No one has owned this series quite like Andrew Mangiapane. He scored the first goal in the first meeting back in December and added a pair on Wednesday. The Oilers haven’t been able to contain the underrated depth scorer this season. If he goes off again, it will be tough to beat this Flames team.

Kris Russell (concussion) and Joakim Nygard (hand) are both on IR and won’t play tonight. William Lagesson will sit on defense, while James Neal (foot) sits up front for the second night in a row. Jujhar Khaira is a healthy scratch for the fourth time in six games.

The Flames will have one lineup change from Wednesday night, as enforcer Zac Rinaldo is a healthy scratch. He’ll be replaced by Dillon Dube. Juuso Valimaki (knee) remains on IR.

“It’s no secret that team over there knows how to win hockey games,” Draisaitl said postgame last night. “For them to tie it up and for us to come back and win the game, it’s huge. It’s a huge confidence boost for sure.” The Oilers are hoping that confidence boost will get them on the board in the Battle of Alberta.

Draisaitl completed his terrific month of January with two goals against the Blues and the top spot in the NHL when it comes to points. Draisaitl was named the NHL’s second Star of The Month earlier today. Alex Ovechkin, who has had a historical run, was the top star. Leon finished with 17 points (6-11-17) in nine games.

The Oilers are 7-1-2 in their last ten games, the most successful stretch of the season for the club. The only sore spot in that record? They are 0-1-1 against the Flames during this run. Edmonton is currently 3-1-1 in their last five games and sits second in the Pacific Division with 60 points.