Your Morning Dump… Where Jaylen Brown isn’t an All-Star (yet), but he has other goals 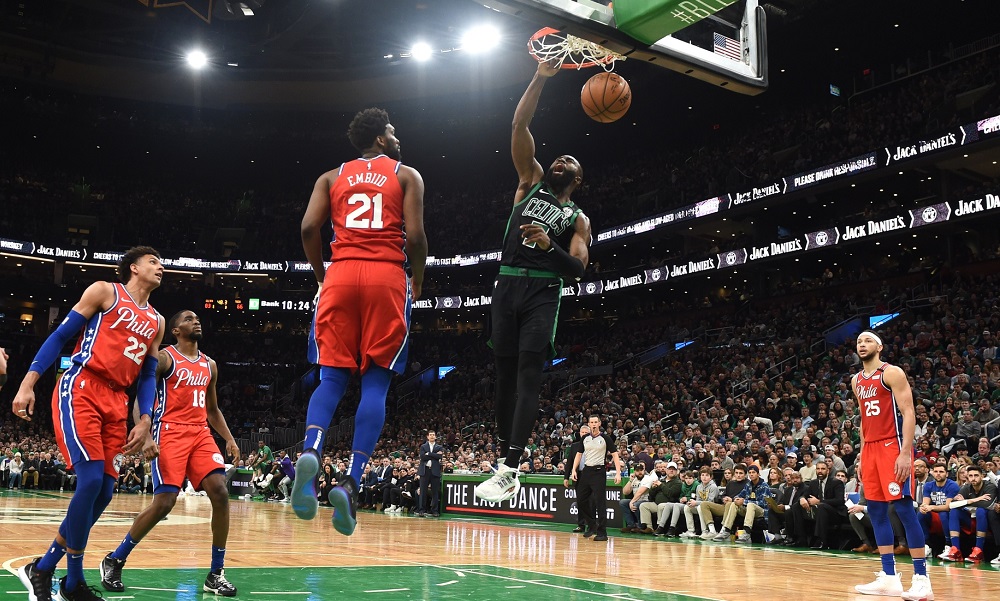 Your Morning Dump… Where Jaylen Brown isn’t an All-Star (yet), but he has other goals

The Celtics exploded in the third, and the Sixers just didn’t seem to have an answer. Embiid finished the third quarter with 11 points, and Horford picked up his fourth foul early in the period. The Celtics, meanwhile, appeared to be having a lot of fun. Brown dusted Matisse Thybulle and Al Horford with a pair of nasty dribble moves, and Boston’s lead ballooned back to a very comfortable margin.

The Celtics kept a comfortable advantage over a Sixers team that simply didn’t have the juice for a real comeback.

Philadelphia could’ve used Josh Richardson last night; he torched the Celtics for 29 in their last meeting, but he’s got a bad hamstring. The Celtics were without Kemba Walker, whose surprise sore knee on the injury report has turned into sitting at least two games.

Anyway, Jayson Tatum and, especially, Jaylen Brown made sure none of that mattered.

Tatum scored 25 points with 4 assists, getting to the free throw line often (8-of-10), drilling some dagger threes (3-of-6), and delivering the play of the game (see Page 2).

Brown managed to surpass that performance, with 32 points, 9 rebounds and a bunch of highlight reel plays, including:

Not bad. Not bad at all. pic.twitter.com/UgtHFnIT8L

Since being left out of the All-Star game, JB has averaged 25 points and 8 boards. It’s natural to think he’s sending a message, but when asked, he said no.

Jaylen Brown on missing out on All-Star selection: "Getting ready to head into the playoffs is what my mind is on right now…because that's it, you know what I mean? That's the stage you want to be on. I think some people have it backwards."

He could not have given a better answer.

On Page 2: A rude welcome back

Having been unable to play in Philadelphia’s first visit to TD Garden, Saturday was his first time here in uniform since leaving. But the crowd gave him a warm reception at the December 12 game.

“I didn’t really know what to expect, to be honest,” he said. “But I was happy with that. A lot of respect, mutual respect — from the fans and also my respect to them.”

No doubt, Boston was more than just a temporary place of employment for Horford and family.

“A lot happened here in my three years, on the court and off the court,” he said. “Two of my little girls were born here, and, you know, on the way over I was looking at Mass. General, and I was like, ‘Yeah, I was there.’ Just a lot of good memories. All I have is positive memories here of my time.”

Herald: 76ers happy to have Al Horford — and to not have to deal with him on the Celtics

It was not a happy “homecoming” for Al Horford on Saturday night. His first time on the parquet in a Sixers uniform was a disaster.

Horford made just 4-of-11 shots overall and 1-of-6 three-pointers. He didn’t get to the free throw line. He finished with 9 points, 9 rebounds and 4 assists.

Al also got dunked on loudly by both Jays. The first jam, by Jayson, reverberated around the NBA and the internet and was probably felt by Al deep in his soul.

Jaylen’s was not as dramatic because Al made a business decision and stepped back. Still, the big man was helpless.

Then he got one-upped and trash-talked (with a smile) by Marcus Smart.

“Earlier on the half, he scored on me,” Smart said. “I didn’t see it or know, but everyone was telling me he gave me the little baby pose. I asked him when he was on the bench, ‘Did you call me little?’ He started laughing and I told him ‘I’m going to remember that.’”

Midway through the fourth quarter, with the Celtics up 13, Smart caught the ball against the Sixers zone defense. Horford, playing the center of the 2-3 zone, came over to pick Smart up. Smart faked, dribbled, and launched a floater high enough to scrape the banners before it splashed through.

MassLive: Boston Celtics Marcus Smart gets last word in trash talk with Al Horford: ’I gave him a little taste of his own medicine’

And here is that play.

“Everyone was telling me he gave me the little baby pose … I told him, ‘I’m going to remember that.’ So when I scored that last shot… I gave him a little taste of his own medicine.”

To top it off, the Sixers suffered a beatdown that kept them in the 6th seed in the Eastern standings. They’re now 3 games behind the Celts, who are 3rd. If Horford’s crew doesn’t improve their ranking, they’ll be without any home court advantage in the playoffs – which is a problem when your road record is 9-17.

Philly fans will say they won the season series with Boston, 3-1, and that’s true. Also true: the all-time rivalry now stands at 261-190 in the Celtics’ favor.

Some oddities and notables from last night.

Wanamaker with the JAM 🔨 pic.twitter.com/qAc1sF7yYH

NBC Sports Boston: Injury bug has made it hard to tell just how good Celtics can be  |  Instant Overreactions: Have the Celtics finally figured out the 76ers?  |  Ex-teammate Al Horford the latest addition to Jayson Tatum’s wall of posterized All-Stars

The Athletic: Nineteen takeaways from a night when the Celtics proved they can handle the 76ers’ size  |  Two-man game: What we learned from the final Sixers-Celtics game of the regular season

Herald: NBA All-Star voting shouldn’t be criticized by the players