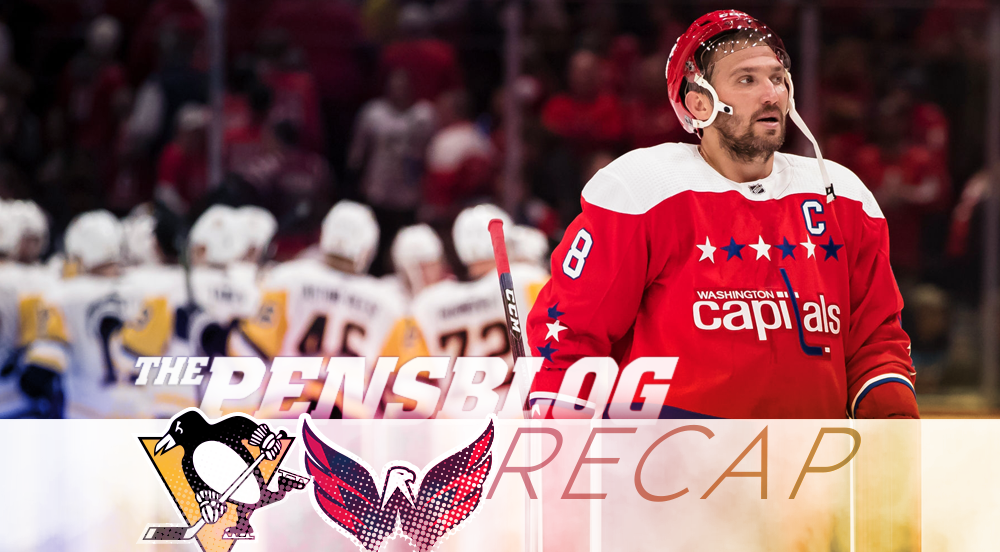 As expected, the Penguins recalling Sam Lafferty for the third time resulted in a lineup change, though not the one we predicted. Instead of replacing Anthony Angello, Lafferty took over Andrew Agozzino’s role at 4C. The rest of the lineup remained the same.

All lined up and ready to go 💪 pic.twitter.com/5IbxSgfgBi

Sullivan surprised some folks by opting for Matt Murray in net. Turns out it was once again the right call, and one of these days we will quit questioning his moves. Until then, Ruhwedel on the offwing again??

The game started off and immediately did not feel like a 12:30 game. 35 seconds into the game Ovechkin was called for slashing. It was technically a slash, though one you don’t generally see called on someone like Ovechkin. This call sort of set the precedent for the officiating. The Penguins powerplay sucked all day, and their first attempt did a great job of setting that tone.

Following the kill the game settled into some 5v5 play for a full two minutes before Jack Johnson and Garnet Hathaway each went off for roughing. The 4v4 lasted for almost two minutes before John Marino was hit with a tripping penalty. It was a soft call, but so was the Ovechkin slash so whatever. The Caps went to a 4 on 3 powerplay but couldn’t get anything done. After that penalty expired Lars Eller would take an interference penalty and the Penguins powerplay would get their second look. I’m telling you, the Penguins powerplay was as exciting as the Pro Bowl the whole day. After the 2nd failed attempt the Caps got a little zone time. The puck came to Eller and popped up on edge enough so that he was able to flick one top shelf over Murray’s glove to give the Caps a 1-0 lead.

The Capitals PR team doesn’t believe in gifs, and since 102% of you are reading this during work I’m not putting video replays with sound in. The puck was on edge and Eller roofed it, perfect shot and nearly impossible for Murray to read. Alas, the reaction was predictable

The Capital One Arena was rocking. The fans were loving it. They were still cheering loudly 70 seconds later as some guy named Lafferty picked up the biscuit. Lafferty broke into the zone, and decided to fire a bullet to the top left corner to silence the crowd

The first observation here is the willingness of Sullivan to actually use his 4th line, which he did much more in the game with Lafferty as the 4C than he has done recently with Agozzino. The second observation is the shoot-first mentality by Lafferty, who makes a great first impression in his first game since his third call up.

This isn’t a run of the mill play by Marino here. The pass from Malkin isn’t perfect, but instead of turning to face the boards Marino uses his legs to keep moving forward while adjusting to the reception. He does this while keeping his head up and it results in a perfect pass to the front of the net. Marino most likely doesn’t deserve the rookie of the year award, but damned if he doesn’t deserve to be on the ballot.

The Penguins continued pushing the rest of the first and the Capital faithful was quiet. Dom Simon would take a holding penalty with 3 minutes left in the period. The Penguins would kill that off relatively easy and the period would come to a close at 2-1.

Here's a look at your Penguins vs. Capitals stats after 20 minutes of play. ⬇️ pic.twitter.com/m09Ra9cdKm

The second period opened up with a similar pace the first ended with. 3 minutes in Jonas Siegenthaler took a slashing penalty against Galchenyuk sending the Penguins to the powerplay for the third time. The Penguin’s powerplay looked like crap for the third time. Back at 5v5 the game opened up a good bit as both teams were getting chances and both goaltenders were playing really well. Murray was on his game, at the top of the circle cutting down angles, and boy you just hate to see the Penguins with two confident goalies. https://twitter.com/penguins/status/1224040355080888320?s=20

Near the midpoint of the period Dominik Simon got to work in a board battle to win possession of a 50/50 puck. Simon eventually gets the puck to Crosby at the goalline who put a shot on goal. That shot was saved but the rebound came to Simon, who used some slick mitts to pop it home.

Simon makes the nice pass to Crosby but then realizes he is wide open. he takes advantage of the Capitals treating him the way Pens fans treat him and walked right out in front. The rebound was there and Simon knew what to do with it. If only Simon scored more, this would’ve counted twice.

The Caps faithful were stunned. Samsonov went from winning his last 12 games in a row to giving up 3 unanswered goals. The game went to 5v5 for about three minutes until Crosby grabbed Oshies stick while on the bench. There were reports that Oshie speared Sid, but I haven’t seen and angle of that so I’m not sure if that happened or if it was just the black and gold goggles coming out. Regardless, it was a dumb play by Sid to put the Caps on the powerplay. The Penguins penalty killers did a great job shutting down the Caps powerplay once again.

Shortly after that powerplay expired the Caps were called for too many men on the ice and the Penguins went to work failing for a 4th time on the powerplay. By the time this failed attempt was over, there was just under 3 minutes remaining in the frame. Time would tick down and the period would end with a 3-1 lead for the Pens.

The third period started with an early set of penalties as Kris Letang and Tom Wilson took penalties 17 seconds in. The game went to 4v4 for about 90 seconds before Dmitry Orlov was called for slashing Crosby. The Penguins powerplay went to work and did nothing. Following the kill, the Capitals turned it up, like these amps go to 11 up. The Pens held on for as long as they could but you just knew something was going to break. Eventually, at the 6-minute mark, Kuznetsov broke in on goal and put a backhander off Marino’s skate which deflected perfectly up and over Murray’s shoulder and in.

It was a fine line for Kuznetsov to take to the goal, but he was able to put his nose down and sniff this one out. Suddenly it was 3-2 and the butt-clenching in Pittsburgh intensified.

The Capitals continued their surge for the next four minutes until Carl Hagelin took a bad high-sticking penalty on the neutral zone. The Penguins powerplay was about thrilling as the Mr. Peanut saga but it did buy some time for the team. Following the kill, the Capitals again turned up the heat. Shift after shift the red mob attacked but shot after shot Murray was there with an answer. As the Penguins kept breaking down Murray did what every hater always says he can’t do, he stood as the final wall. The following video has sound, I’m breaking my promise from above but also, it’s worth it.

Matt Murray with the ten-bell save!

Ovechkin on the doorstep, going glove side, I called Kansas and the Chiefs said this ain’t it. Seconds after this save Murray made another equally impressive one but for some reason, there are no gifs available. The saves by Murray kept the Pens up by one and eventually, somehow, the third line got to work and turbo man Tanev was able to get a look on Samsonov. It was the first shot on goal in about 15 years but it was a big one.

It's almost like the puck just wanted to go into that net 😉 pic.twitter.com/sK1JWgOPHF

This line has been one of the biggest reasons the Penguins have had the season they’ve had. As soon as Sullivan put them together he knew he finally had a line he has been lacking since the cup runs. Huge goal by Tanev and 10 seconds later it would become even more important when Lars Eller would take a wicked snapper bar down to make it a 1 goal game again.

The Caps would pull their goalie for the final 2 minutes and it would take everything in the Pens tank to hold on, but they did. Murray remained strong, and time would click down on a huge regulation win. 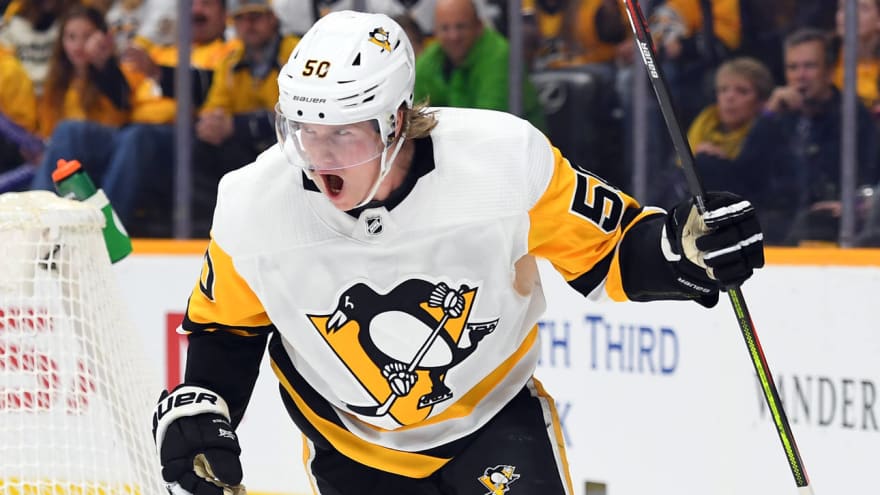