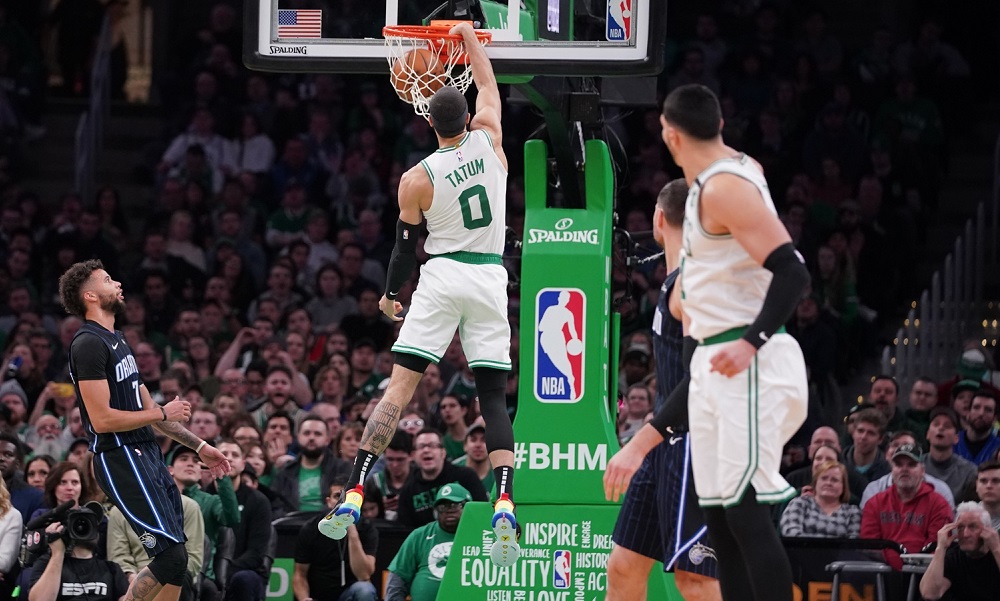 Jayson Tatum showed why he’s an All-Star, scoring 33 points – 13 of them in the fourth quarter – and Gordon Hayward added 23 as the Celtics beat the Orlando Magic for the second time in two weeks, 116-100. The Celts shot 53.5% from the field and made 13-of-23 from the arc, pulling away in the second half. Boston has now won five straight and eight of their last nine, with a 35-15 record.

Evan Fournier had 26 and Aaron Gordon 23 for the Magic.

The Celtics were even more shorthanded than usual, which gave The Rook his first NBA start.

Romeo with the swat ❌

JB with the bucket ✅ pic.twitter.com/fxSO1e9MGa

After an early 12-4 deficit, the home team bounced back.

To reiterate, Boston was shorthanded.

Grant Williams made two early threes from, and these contributions on both ends.

Jayson missed some layups, but not this one.

The Magic battled back to tie at 55.

We aren’t getting stops without Grant

Both teams are shooting 57 percent in this game.

Tatum with 17 Pts, 3 Reb, 2 Ast at half! pic.twitter.com/SwLSScIlkK

Third quarter was a battle, as Orlando continued to stay close.

Another nice finish from Romeo. Rejects the screen and winds up under the backboard, but reaches back with his left to get it up on glass pic.twitter.com/4RBa4h6Upz

The Romeo Langford who played at IU would never have taken a charge like that.

That kid continues to impress.

One of the refs had to leave the court early on and never came back. It was a throwback to the days before three refs.

Yes they should. This madness is glorious. https://t.co/rzTlfFd52A

With the score tied at 72, Boston ran off a 13-5 burst that included a Vincent Poirier and-one. And Tatum.

Tatum finishes the third quarter with 20 points for the game after dropping in a tough layup at the buzzer.

Jayson Tatum is the first Celtics player to record seven consecutive games of 20+ points within his first three NBA seasons since Paul Pierce did so 13 straight times in 2000-01 https://t.co/xWpaZvyKxv

Orlando 23rd in the NBA averaging 21.9 free throw attempts per game, has 26 heading to the 4th.

Fourth quarter, Grant with the tribute to the injured Smarf. GIMME THAT!

You are not being a biased Celtics fan, in fact you are probably trying too hard not to be. Jayson Tatum IS that good

This Jaylen yam gave the Celts at 10-point lead.

The Magic put on a desperate full-court press, but the Celtics handled it and Romeo sealed the win with a two-hand slam.

Romeo in crunch time is a story

Romeo Langford drawing an offensive foul in crunch time is not something I expected to see when I left for the Garden tonight.

Then Grant drained his third three of the night and it was Tacko Time.

It wouldn’t be a Celtics game without an injury, however, this in the final minute.

Coach Stevens hopes Jaylen Brown will be back "sooner rather than later." He left the game after tweaking his right ankle pic.twitter.com/yZI4k0u45e