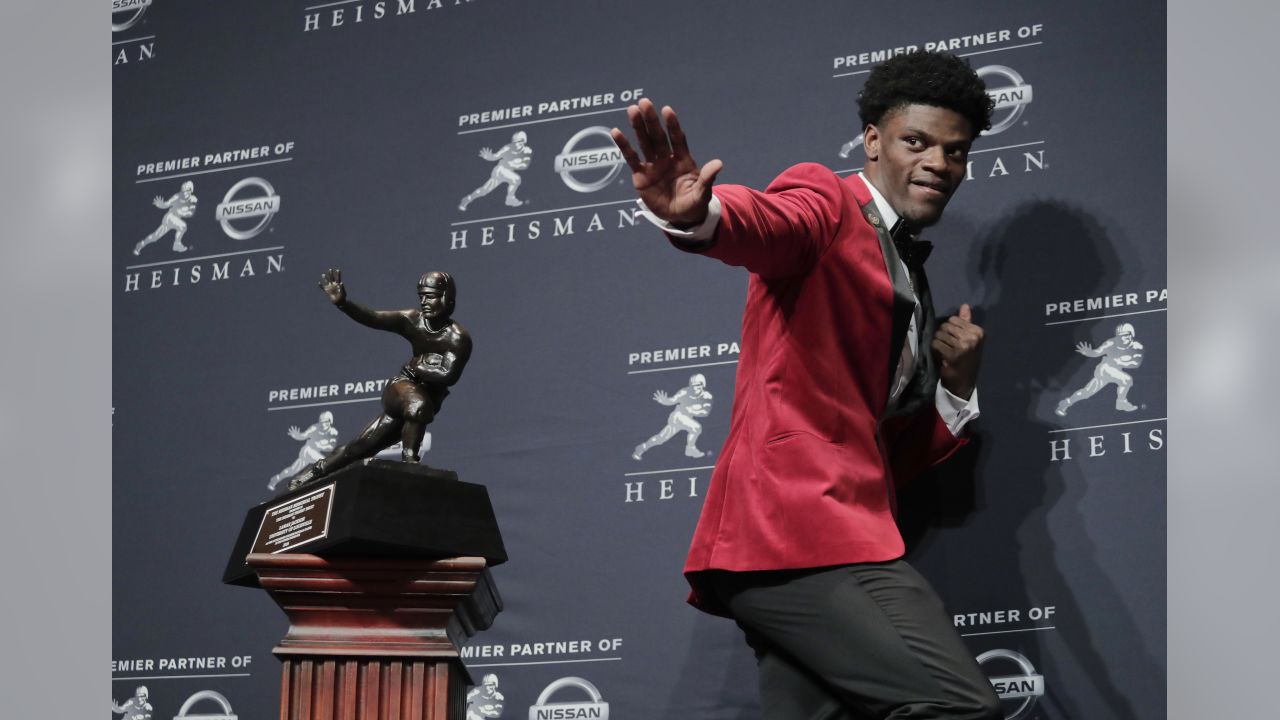 Big season awards are given during Super Bowl week. The bad news is if your home team isn’t in the Super Bowl, you might get overlooked.

So it is fitting to recap the awards won by the Ravens.

The Ravens had the best regular season in franchise history, and the coach who led them has been honored for it.

Head Coach John Harbaugh was named the 2019 AP Coach of the Year Saturday night at NFL Honors in Miami. It’s the first time Harbaugh has won the award during an outstanding 12-year career that has made him the winningest coach in franchise history.

By a vote count of 27-14, Harbaugh beat out San Francisco 49ers Head Coach Kyle Shannahan, who helped turn the 49ers around after going 4-12 last season and are now in the Super Bowl following a 13-3 regular season. In the regular season, however, Harbaugh’s Ravens defeated Shannahan’s 49ers.

Harbaugh’s teams have made the playoffs eight times, including Baltimore’s 2012 Super Bowl season. However, the Ravens had never had a regular season quite like 2019.

They finished with the NFL’s best record (14-2) and enjoyed a franchise-record 12-game winning streak to end the regular season. Baltimore captured its second straight AFC North title, winning the division by a six-game margin, and clinched the AFC’s No. 1 seed in Week 16.

Harbaugh thanked his family, though his wife, Ingrid, and daughter, Alison, were not able to be in attendance because Alison had a big basketball game, and won, Harbaugh pointed out with a smile. He thanked the “top-notch” Ravens organization, starting with Owner Steve Bisciotti, President Dick Cass through the rest of the front office.

“Mostly and above all, our players and our coaches. We have some special people,” Harbaugh said. “They’re a joy .. to work with every single day and an honor to be around. Players and coaches, you make it happen.”

It was Harbaugh’s vision that set the tone for Baltimore’s record-setting season. He was the driving force in the decision to re-design the offense and to tailor the attack around the skill set of second-year quarterback Lamar Jackson. While some were skeptical it would work, Harbaugh went against the NFL grain and relied on Jackson’s ability as both a passer and runner to lead an offense that was versatile, unique, and difficult to stop.

Showing his openness to new ideas, Harbaugh relied more on analytics when making in-game decisions while continuing to trust his instincts. The Ravens became the NFL’s most aggressive team on fourth down with much success. They were a perfect 8-for-8 on fourth-and-1 during the regular season, staying on the attack in situations when many teams would have punted or settled for a field goal.

Harbaugh is the winningest coach in franchise history (118-74 regular season, 10-7 postseason), with only one losing season, establishing a winning culture in Baltimore that has stood the test of time. Only three active NFL head coaches have a longer tenure – Bill Belichick of the Patriots (2000), Sean Payton of the New Orleans Saints (2006), and Mike Tomlin of the Pittsburgh Steelers (2007). All of them have won at least one Super Bowl.

Regardless of personnel or playing style, the Ravens have continued to thrive under Harbaugh. There have been seasons when Baltimore relied on its defense to win. But in 2019, the Ravens were the NFL’s highest-scoring team, averaging 33.2 points.

In an era when potent passing attacks are prevalent, the Ravens set the NFL single season rushing record (3,296 yards), topping the Patriots’ mark of 3,165 yards in 1978. They became the first team in NFL history to average more than 200 passing yards and 200 rushing yards in a season. Their exploits resulted in wide individual recognition for players, as 13 Ravens were selected to the Pro Bowl, tying an NFL record for most from one team in a single season.

Harbaugh is quick to praise others for contributing to his success, but winning Coach of the Year for the first time adds another highlight to his already impressive tenure. He is a coach who prefers to chase excellence over accolades. But this season, Harbaugh received both.

Then there was the MVP award going to Lamar Jackson…

Lamar Jackson wasn’t just the NFL’s Most Valuable Player in 2019. He was the unanimous MVP.

Jackson became just the second unanimous MVP in NFL history and the youngest (23) quarterback to ever win the award. Tom Brady was the only other MVP to get all 50 votes (2010).

Jackson’s rise to the top of the NFL is a massive personal achievement and landmark in Ravens franchise history.

He is the first MVP in Ravens history – a past that includes Hall of Famers Ray Lewis, Ed Reed and Jonathan Ogden. And Jackson did it in just his first full season as the starting quarterback.

Can a non-traditional quarterback who is just as likely to beat you with his arm as his legs thrive in the NFL? Jackson’s trophy case will provide the answer.

“There’s been a lot of doubt going on, me being a running back, a receiver, stuff like that. That came when I got to the league. I had a great group of guys, a great organization with me,” Jackson said in his acceptance speech.

“Those guys all believed in me,” Jackson said. “And my mother – the bread and butter!

Jackson’s 113.3 quarterback rating was the third highest in the league. At the same time, he had the sixth-most rushing yards in the league.

It was a season unlike any other in NFL history, and one that will be remembered forever. In 2019, Lamar Jackson won the league’s highest individual honor. Next year, he’ll look to take home the ultimate team award.

The Ravens said an offensive revolution was coming. Now that it’s hit the NFL’s shores, the hardware is coming with it.

Offensive Coordinator Greg Roman – the chief architect of that revolution – was named the NFL Assistant Coach of the Year for 2019 Saturday night at NFL Honors in Miami.

“I would like to thank the commitment from every coach, player and organizational staff member for this award,” Roman said via a statement. “Out of this commitment, special and amazing achievements were born. We look forward to coming together again in the spirit of team to create a bright and exciting future.”

The mark of a good coach is putting players in position to do what they do best. With Jackson winning the MVP in his first full season as starter, at just 23 years old, it’s clear Roman did just that.

It went well beyond Jackson’s success. The Ravens had seven offensive players go to the Pro Bowl. They leaned heavily on their tight ends, and Mark Andrews led the team in receiving. They utilized a 300-pound fullback. They even broke out a Heisman package featuring Jackson, Mark Ingram II and backup quarterback Robert Griffin III.

Each week, Roman had something new for his opponent to prepare for, and coaches admitted it was extremely difficult to be ready in a week.

Roman came to Baltimore in 2017 with a reputation as a run-game savant. He proved more than that in his return to offensive coordinator, a role he last had in Buffalo in 2016 before being fired early in the season.

Baltimore’s passing game didn’t post huge numbers, but it was effective. The Ravens were the second-best team in the league in the red zone, and Jackson’s NFL-leading 36 touchdown passes attest to high efficiency.

The run game was the meat and potatoes, however, harkening back to the early days of football. It’s not just that the Ravens ran more than any other team in the league this season (by far). They also ran it better, averaging a league-high 5.5 yards per carry.

Roman interviewed for the head coaching job of the Cleveland Browns after the regular season finished, but it ultimately went to Kevin Stefanski, the former offensive coordinator of the Minnesota Vikings. The Ravens are glad to have their Assistant Coach of the Year back.