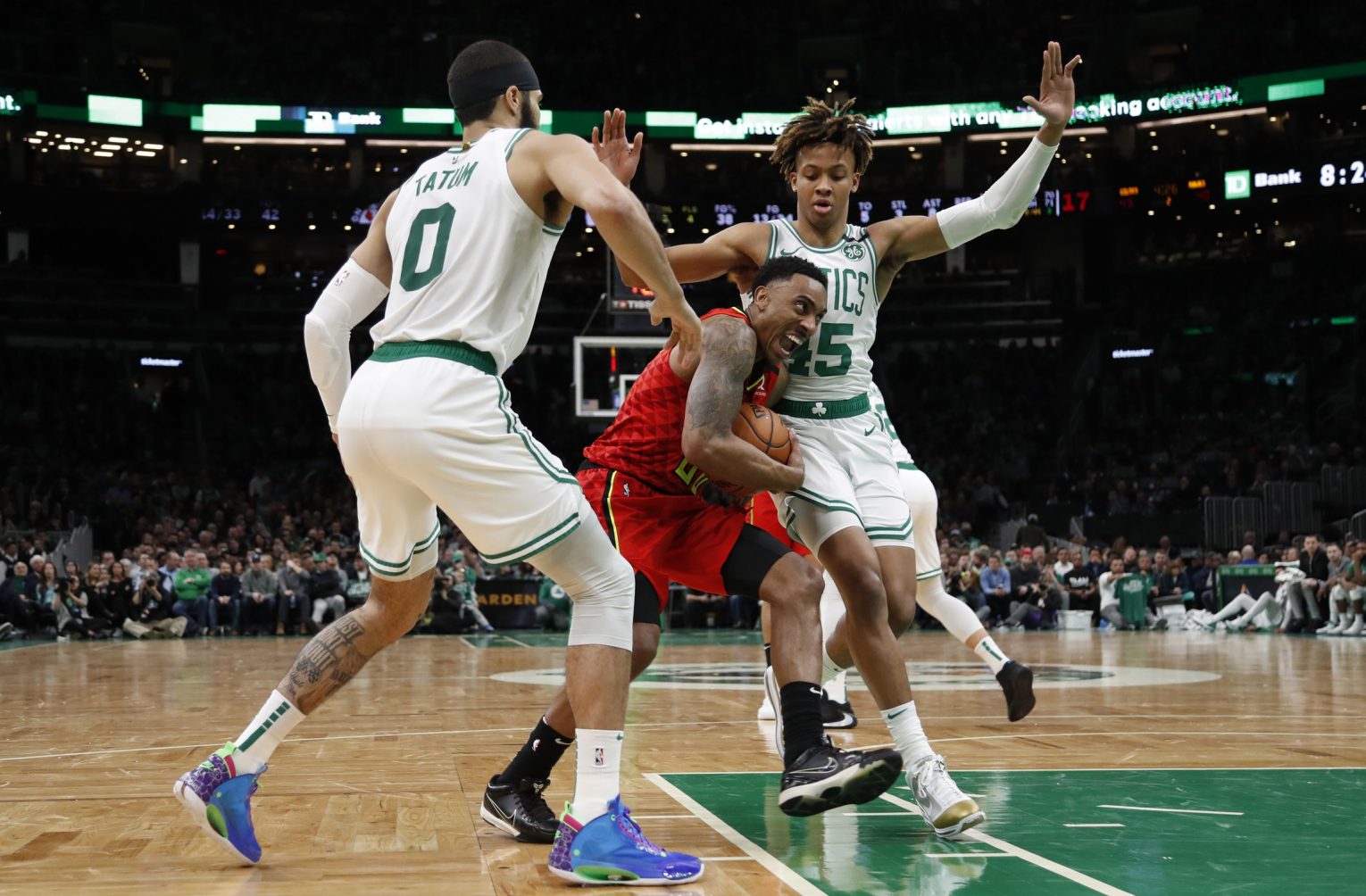 Hospital Celtics vs. Hospital Hawks. TWO BEAT-UP TEAMS ENTER, ONE TEAM LEAVES. A recipe for kind of a weird and woolly game, and it didn’t disappoint! Wildly back-and-forth, defense-deficient first half, dominant third-quarter-and-a-half by Boston, and then an absurd panic-inducing near-comeback from Atlanta (without Trae Young, no less) before yielding to the home squad in a 112-107 victory.

Jayson Tatum knew the mantle of this game was his to carry with Kemba Walker only just returning from injury, and carry it he did (32-4-6 on 52.6% shooting). But you could’ve expected that, whereas you’re probably more surprised by a mistake-minimal, much-needed 16-15 game from Enes Kanter—and the first excellent performance by Romeo Langford: 16 points, 5 boards, a steal, 3 blocks and a lot of clutch defense. (We’ll get more into the nitty-gritty of Langford in tomorrow’s Rational Thoughts.)

Things started off very, very well for our heroes. With Tatum leading the charge, it looked like we were set up for one of those 27-7 opening quarters the Cs sometimes make for themselves. Some highlights:

Smart steals it and stuffs it 💪 pic.twitter.com/YsXmKybgs6

Then the dynamic reversed and it was the Hawks on a wild 10-0 run that ended the quarter as a 12-4 run. We did get a cool-ass Romeo Langford moment, though, and we can definitely use more of those:

Langford with the REJECTION pic.twitter.com/ChsNykuVv7

Kevin Huerter, Ginger Bane Of My Existence, and John Collins, who is Good and Not Annoying, continued the ATL run to the tune of about 20-6—and their team’s first lead—in the first half of the quarter before Enes Kanter reestablished some order.

Let's try that one again pic.twitter.com/i4tlMQZ1Fs

He was undeniably important to ensuring Boston didn’t fall behind to any serious degree because he could reasonably oppose Atlanta bigs like Collins and Damian Jones. Not all of his experiments worked, though:

The real story in the second half, however, was Langford.

Help me, I have fallen for Romeo and can’t get up

The 3 stands for the type of shot he just made

He only scored 5 points, but exhibited more natural NBA-level athleticism and defensive instinct than he has at any point this season. Like Grant Williams, he’s slowly evincing signs of the player the Celtics front office hoped he would be when they drafted him. (Albeit less remarkably than Grant, but that can be attributed at least in part to injuries.) Unfortunately none of this stopped ATL from leading at the half, but it’s still good to see.

The Garden was thoroughly disgusted by this. Audible grumbling from the crowd https://t.co/ubproQJgYz

Uh, yeah. They were right to grumble. This is the first time I’ve doubted Jaylen Brown and honestly I hate it.

As indicated above, the second half was much more of a defense-heavy, grinding rock fight than the shootout nature of the first. This, unsurprisingly, worked in the favor of the Celtics, whose acumen on that end of the floor is…miles ahead of its opponent. Collins and Huerter did as much as they could to oppose Boston with size and shooting, respectively (ultimately combining for 55 points, 17 rebounds and 7 dimes).

Kemba's on a 30-minute restriction. Feels like the Cs need to extend a lead during this stretch before they go deep into the bench again.

Perhaps the Cs heard Himmelsbach, because around then Boston decided to starting smacking some MFers around. Tatum, Walker and Brad Wanamaker nailed key triples and drives, and Kanter kept plugging away down low.

Although there was some back-and-forth in the game’s final frame, it seemed apparent fairly quickly that the Cs had buried the uncertainty of the first half and poured salt on it. Observe:

Everyone involved, from the stars to the guys at the end of the bench. You love to see it. Furthermore:

romeo langford locks down kevin huerter's attempted equalizer 3 and then grabs an offensive rebound to ice the game. at this rate they are going to retire his number by tuesday.

And then the Hawks almost came all the way back at the very end…except they didn’t. Sometimes you gotta be good and lucky!