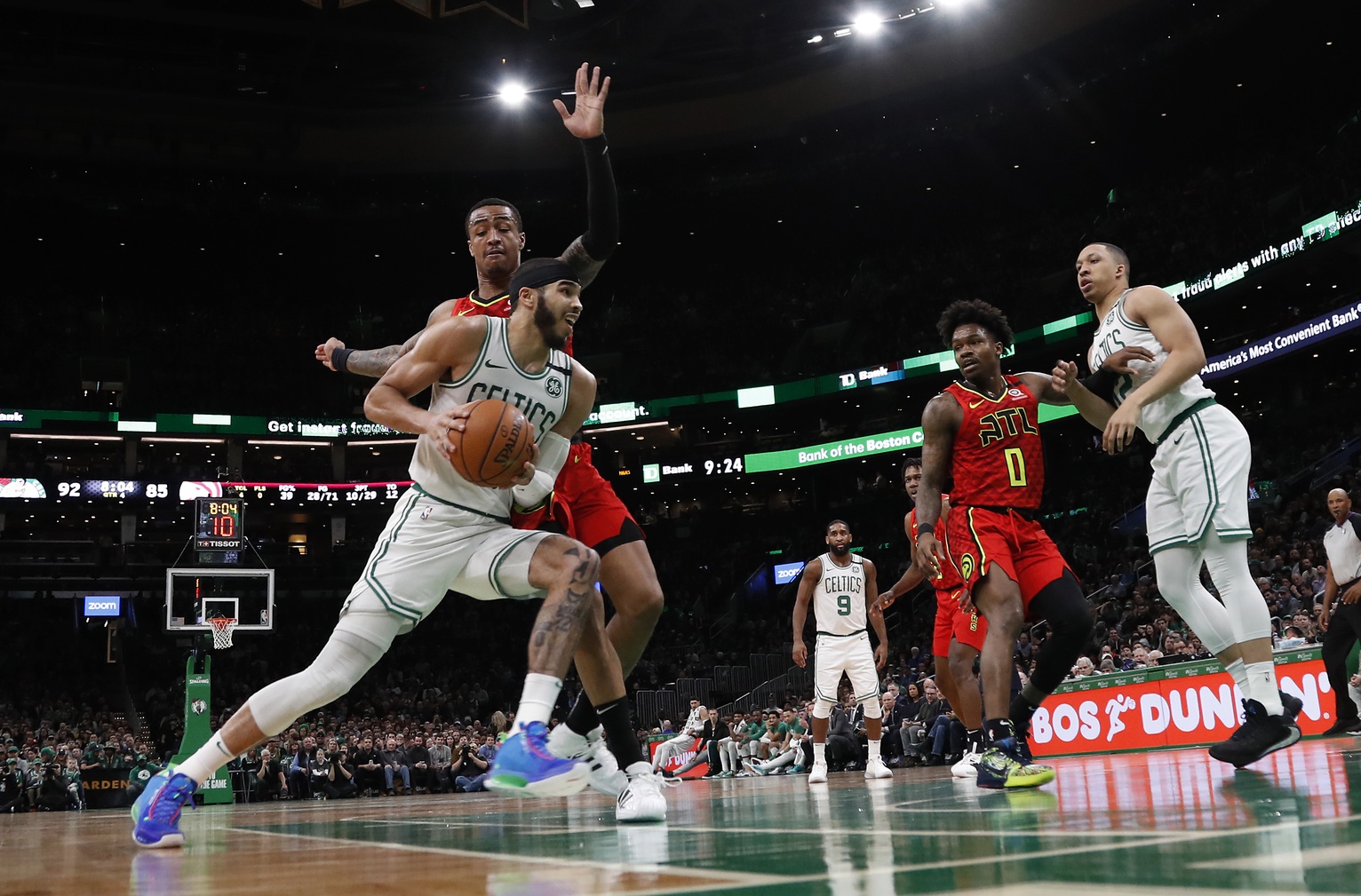 That one got a lot more hairy than it should’ve toward the end there, but it was still a win—the sixth straight for the Boston Celtics, helping to solidify their position at no. 3 in the Eastern Conference. Let’s get into how it all went down:

It was too close—but not in a way that signaled big problems
All of the Cs’ games against the Hawks have been close-ish: 109-106, 123-115 and last evening’s 112-107. Of the Celtics’ six core players, only Jayson Tatum played in all three. Gordon Hayward, Jaylen Brown, Marcus Smart and Daniel Theis played two; Kemba Walker was available only last night, and on a slight minutes limit.

Conventional wisdom dictates any good team must always beat the bad teams with authority. With a few notable exceptions—losses to Sacramento, Washington, Phoenix, Detroit, New Orleans—they’ve always done that (and though those defeats are inexcusable, only the Pistons game featured a full-strength Boston roster).

The point of all this being: A game like this being close toward the end, even taking the absence of Trae Young into account (and the fact of Atlanta’s general badness), doesn’t really tell you anything about major problems with the Cs. They turned over the ball a lot in Q4, but generally take care of it, so that’s no major flaw. Brandon Goodwin took them by surprise and scored a bunch, and maybe they should’ve defended him better, but he’s not a usual Hawks rotation guy; he was on the floor because Young wasn’t. Probably didn’t make the scouting report. Those are just a few examples of the Q4 mistakes, but they only spoke to one of the team’s two real weaknesses: bench depth. When Jaylen, Gordon and Theis return, as they all should fairly soon, this will minimize. The other real weakness, size, will also reduce when Rob Williams returns, if not quite minimize.

Romeo, not dying
Prior to last night’s game, much was made of Romeo Langford having played only slightly more than 100 minutes in the NBA. He’s at 174 as of Feb. 8, 2020 after clocking 28:45 in the Celtics’ last contest.

I feel like that number is gonna start rising more steadily in the remainder of the season. Setting aside the fact that this was against a partially depleted Hawks, Langford showed the most substantive evidence yet of his potential, particularly on defense end with his 3 blocks (one of which was against John Collins). Offensively, his driving and slashing acuity combined with the length of his arms got him to the line or put him in position around the cup, and he also did reasonably from deep for a rookie whose college shooting was severely injury-handicapped, clocking in at 16 points on reasonable 45.5% shooting. If this is even somewhat indicative of future performances this season or in the playoffs, it goes a way toward matching the bench upgrades that East opponents like Philly made. (Before you say, “uh but Romeo’s a rookie tho,” Alec Burks and Little Dog ain’t exactly seasoned pros.)

Jayson Tatum, MFing All-Star
Tatum carved up the Hawks defense in perimeter and paint alike for 32 points on efficient shooting (including 7 triples).

Jayson Tatum just did it in back-to-back games. pic.twitter.com/35IVvTq8xG

With Kemba minutes-limited and having an off shooting night, plus the aforementioned absences, Jayson knew the onus would be on him not just to score but also facilitate. Which he did, tying Walker and Smart for 6 assists. That’s 18 out of Boston’s 23 total assists (on 37 made baskets, which is unequivocally good). As he adds more versatility to his game, the scarier his future should be to all opponents.

Kanter played his role perfectly
Much of Celtics fans’ frustration with Enes Kanter has been him doing too much or too little: bogging down in the post on offense; moving insufficiently or ineffectually on defense. In recent games, however, I think Kanter has shown more discipline—using his preternatural rebounding ability when it’ll be most helpful to the team, not when it’ll pad his stats.

Kanter dropped a 16-15 double-double plus a block last night, with just one turnover (important, because these can be a huge problem for him). Of those 15 boards, 6 were on the offensive glass at crucial moments where the Celtics needed a second-chance possession. He shot a few too many times (5-11), but doing so got him to the line often, and his scores not infrequently came when key Celtics shooters were resting or having cold stretches during the second quarter. More of this, sir. (And the jokes. The WWE-jokester personality can definitely stay.)

And finally…
I don’t really have any point here but wanted to be sure I showcased this evidence of the wonderfully humorous bond between SMARF and GRANT.

Magic and Larry are fucking OUT

Grant and Marcus are fucking IN pic.twitter.com/GRYj31tVEo

(The content is more wholesome than I generally go for, but I’ll always bite on an Eastbound & Down reference.)