Rapid Recap: Tatum shines as the healthy Celtics take one home by the skin of their teeth in OKC thanks to Marcus Smart 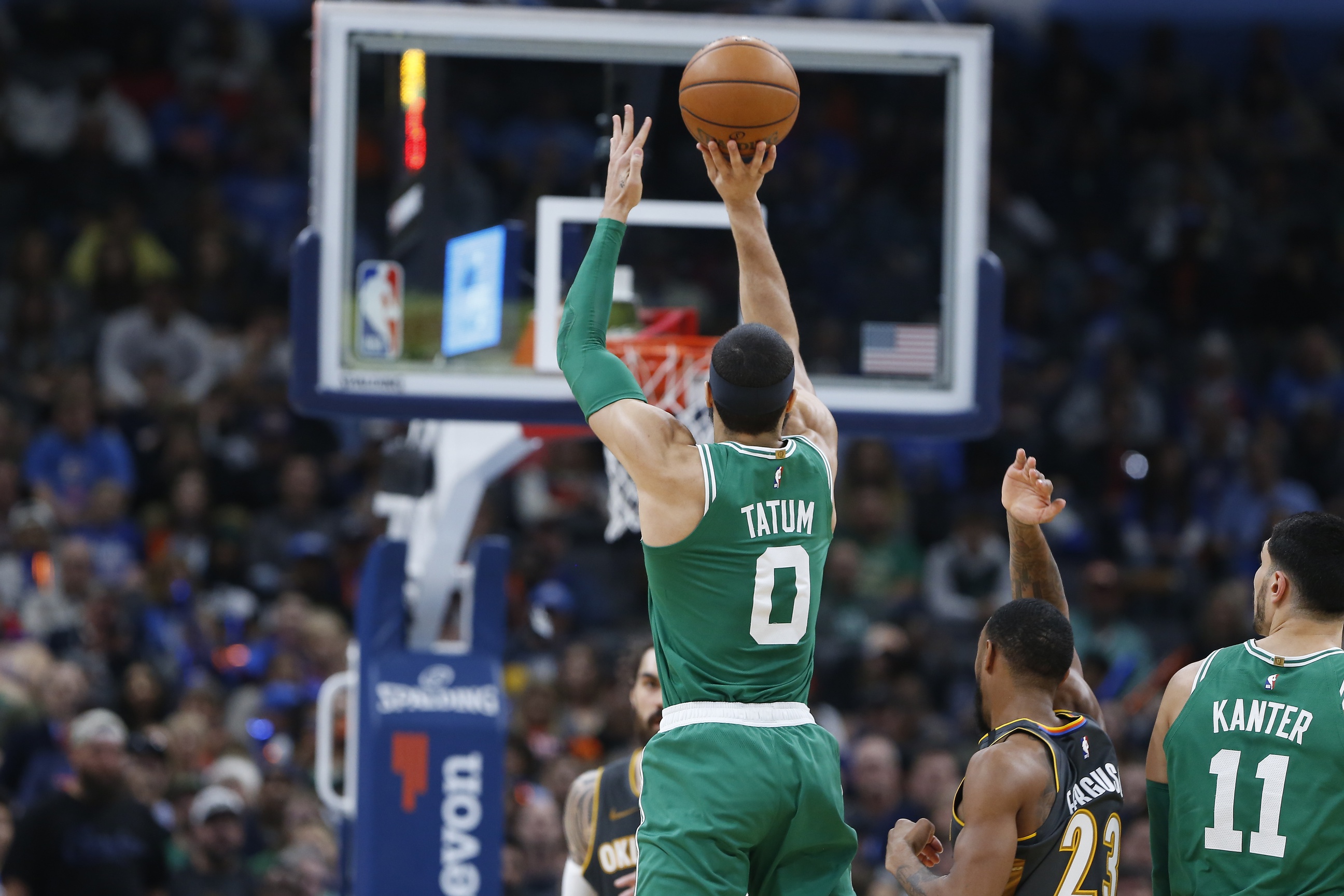 Rapid Recap: Tatum shines as the healthy Celtics take one home by the skin of their teeth in OKC thanks to Marcus Smart

The Celtics kicked-off their West Gauntlet with a nice 3:30 PM tip-off in Oklahoma City. It was a tale of two halves as they looked like a completely different team in the second half and fought for a huge (112-111) win. Without further pandering, lets get into it.

FINALLY! After this recent stretch where the Hospital Celtics have been the wave, they were healthy for their do-si-do with the Thunder.

Celtics usual starters have only played in 15 games, for a total of 160 minutes together, all season. They have outscored opponents by 15.6 points per 100 possessions with a superb 122.1 offensive rating. https://t.co/8KmRdlq1uR

As for Robert Williams, he’s nearing his return as he’s been sidelined since early December.

The two teams came out of the gate gunning as both Danilo Gallinari and Daniel Theis started off hot. Theis was everywhere on both ends and made a couple of heads up plays. The Celtics trailed 16-12 halfway through the first

Kemba Walker joined in on the festivities as he got this fadeaway to go at the end of the shot clock.

Believe me, I’m ready to confront my sins from The Hospital Campaign when I had a jar that I put money in every time I posted about him being a Bum https://t.co/9tRFV80xvh

Enes Kanter showed a bit of muscle and grit down low as he had his hands full with his good friend Steven Adams.

Enes Kanter holding his own in the battle of the Stache Brothers. pic.twitter.com/Iljw1BVlBX

After some lackadaisical coverage and inept offense from Boston, the Thunder rolled into  a 10-0 run to close the first quarter with a 32-28 lead.

Tough start for Tatum. Beyond that travel, he's 0-2, hasn't touched the ball much.

I hate hate hate how Kanter got the ball to Tatum on the block then ran straight down from the top of the key to the other block and put another defender in his way. Just let the kid cook and get back on D for one possession

Jayson Tatum started off the second hot as he hit back to back threes to give the Celtics a 34-32 lead as the two teams continued to get up and down at a rampant pace.

After a few rough calls Brad Stevens showed his displeasure with a delightful sound bite.

The Thunder countered the Celtics mini-run with one of their own as they picked on Romeo Langford and went right at him.

Langford learning some tough lessons on the pump fakes today from some crafty OKC guards.

What a move, SGA 🔥 pic.twitter.com/3isxH0JBKb

A Dennis Schroder layup prompted a Brad Stevens timeout (could’ve been taken a few minutes earlier, I for one am shocked that Brad waited to call a timeout.) as the Thunder darted out to a 51-42 advantage.

Kemba then decided it was time for some buckets as he put in this sweet layup and got fouled on a three-ball.

Kemba with a little magic on the baseline: pic.twitter.com/wuCmzuCBZH

The game within the game between Steven Adams and Enes Kanter is fantastic and also hilarious.

The first half ended with some sloppy play and a 61-52 advantage for OKC.

Then, to top it all off…

Smart's having a bad day https://t.co/ODIPABipPd

Thunder run coincided with the 3rd foul on Smart.

After the free throw, Boston got the offense going with a quick little run to cut the deficit.

The Celtics just made the first three FGs of the 3Q to pull back to within 62-59. Nice response after a rough end to the first half.

Hayward needs to touch the ball every time down the floor. He's just doing so much right in this one

Tatum takin' it straight to the basket pic.twitter.com/wgVLvBRM4r

Tatum taking over.
Two tough drives and then the corner 3, and the 10-point deficit is gone.

Coming out of halftime the energy was way up and the Celtics were flying all over the court as Jayson Tatum began to take over.

Tatum has 12 points in the first six minutes of the third quarter.

Hayward to Tatum for 3️⃣ pic.twitter.com/WcUSIZ9b1Q

The Thunder seemed stymied as the Celtics stepped their game up on both ends. From there, Jaylen Brown returned and made his presence felt with a couple of buckets.

Jaylen's taking out his anger about his ankle on the Thunder.

Drives and scores inside, drives and draws a foul and tries to cram after, then swishes a 3.

In true Smarf fashion, Marcus drew this bizarre foul and had a little theatrics to go with it.

What was that LOL pic.twitter.com/MfnhSXseHt

16 points for Tatum in the second half.

Tatum picked up where he left off in the fourth as he continued to roast with this beauty of a drive. This might’ve been the drive of the year for him as the combo-moves he’s showing were some voodoo.

After a Jaylen Brown drive in transition, the Celtics took a 95-91 lead into a Thunder timeout with about 8 minutes to go. Daniel Theis continued to make his presence felt as he battled down low with the Thunder bigs.

Celtics are going to lose this coach's challenge…5th straight loss for Brad Stevens.

The Thunder just refused to go away as they tightened it up to 101-99 before Tatum/Kemba decided that they had seen enough.

This has to be the manliest offensive possession Jayson Tatum has ever had. This is some BIG-BOY stuff right here in crunch time! pic.twitter.com/O8KmLmFcwG

Things felt bleak for OKC until a couple of poor turnovers by the Celtics brought the Thunder back to within 4 at 110-106.

Said the same about Tatum on previous possession. https://t.co/NyYy1Ucnmw

Then to seal it, Marcus Smart pilfered SGA to slam the door shut as the Celtics come away with a 112-111 victory.

What a play by Smart.

Marcus with the game clinching cookies, of course pic.twitter.com/97EvH1Lt0a

I just can’t get over the plays he’s able to make. He always seems to have a knack for making a big defensive play when the game is on the line and it’s something this team needs to be successful. It’s what we like to call “winning plays”, and boy does he make a lot of them.

That was the 5th game-clinching steal, block or rebound by Marcus Smart this year.

All in all, a fantastic win for a team looking to start one of the tougher stretches of their season. The Celtics head to Houston for their next game with the Rockets.