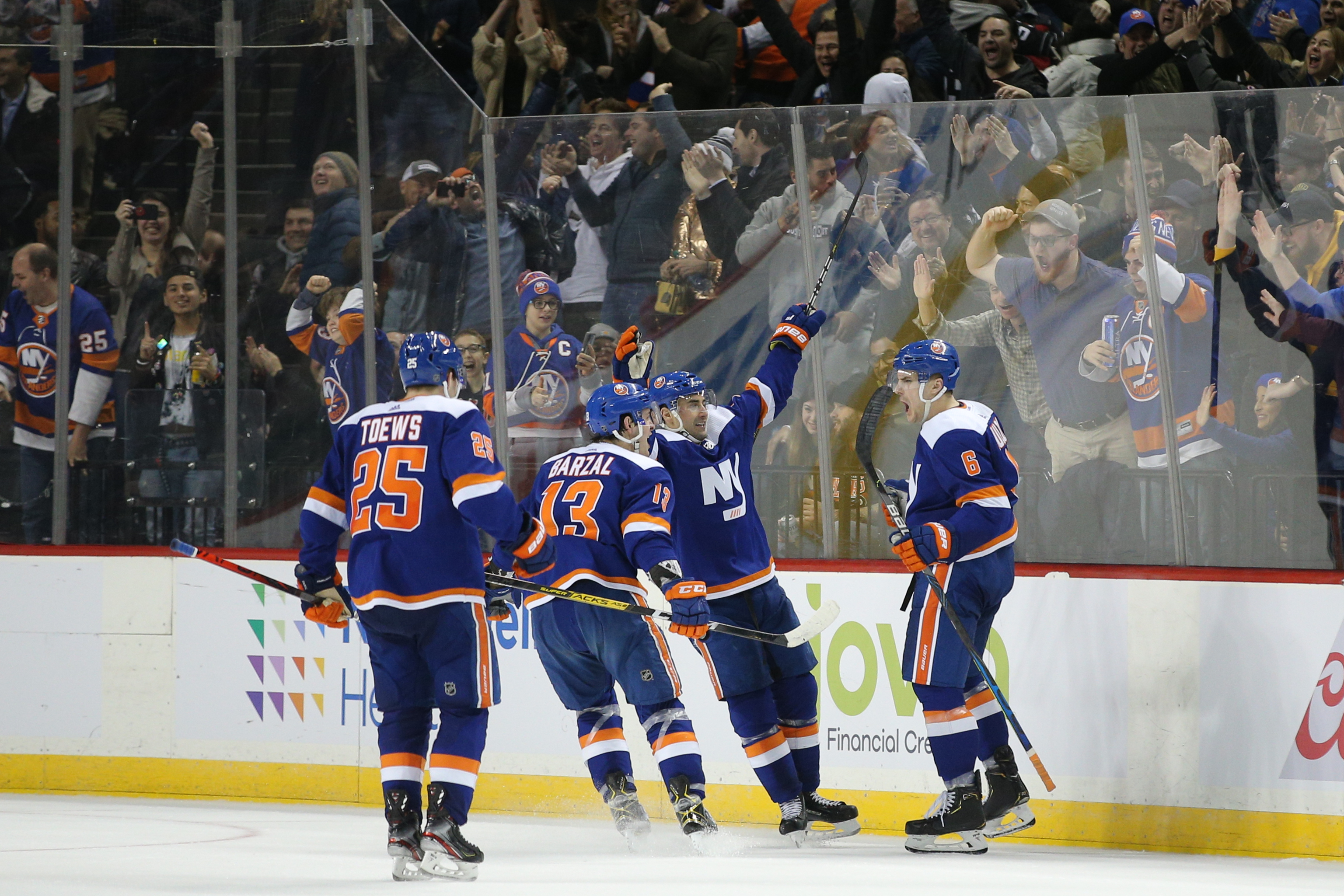 NEW YORK — The word character is one that is often bantered around inside the Islanders’ dressing room, and on Tuesday night they showed why.

After allowing the Philadelphia Flyers to tie the game at three with 1:32 left in the game, the Islanders could have easily let their heads hang low. They had just let a three-goal lead slip away with a rough second and an unfortunate bounce in the third, but instead, they scored two goals in the final 38 seconds on their way to a 5-3 win over the Flyers.

“You obviously don’t want to give that goal up, but I think we still had the task at hand,” Matt Martin said. “We were focused. I think our group has matured a lot over the last two years under (Trotz) and the kind of mindset he brings. … Hell of a response by ( Mathew Barzal’s) line there.

“Went out there on a mission and (Ryan Pulock) with a great shot. That could be a massive swing in points.”

It was a blast from Ryan Pulock that served as the go-ahead goal for the Islanders. The defenseman fired a hard shot from the top of the slot that beat Flyers’ starter, Brian Elliott.

Leo Komarov added an empty-net goal with 3.8 seconds left in the game to secure the win.

“Them getting a late goal there to tie it up and then finding a way to get it done,” Pulock said, “and not give them those points could be very big at the end of the year.”

The last two nights could end up being very big for the Islanders at the end of the year depending on how things shake out. They managed to defeat the Metropolitan Division-leading Washington Capitals with a solid 5-3 win on Monday.

Then they followed it up with Tuesday’s win over Philly, putting space between themselves and the Flyers, as well as Columbus.

“This was a great two days for us. A couple of character wins in high-intensity games,” Anders Lee said. “It was a team effort top to bottom. I think Marty and Leo getting us going tonight. Ebs and Puls and Varly, I think just all in all two full 60-minute games from us.”

"This was a great two days for us. A couple of character wins and high-intensity games. It was a team effort, top to bottom." – Anders Lee pic.twitter.com/98km8ul6DW

Josh Bailey scored the Islanders’ opening goal 7:45 into the first period. Bailey one-timed a feed in the slot off a pass from Barzal along the wall.

Some good passing between Martin and Komarov led to the Islanders’ second goal of the night at 11:13, with Martin burying a shot from the right side of the net. Eberle capped the three-goal first period with a rebound goal after Barzal danced around the Flyers to create the scoring chance.

The Flyers answered with a two-goal second period to cut the Islanders’ lead to one. Travis Konecny scored off a wrist shot from inside the face-off circle at 9:34 and then Robert Hagg scored off the rebound at 11:56.

Sean Couturier tied the game at three at 18:28 of the third before the Islanders’ character helped them pull off the win.

“Our group was determined here tonight,” Islanders coach Barry Trotz said. “The biggest thing to me is we’re not, no matter how the game is going, we’re staying to the process. We’re just going, ‘hey stuff is going to happen during the game and how you react off of it is how you’re going to be.’ There is no panic on the bench.

“I think we’ve seen that in the last little while. We’ve responded in the right times and tonight we did it again.”

The Islanders begin a four-game road trip out west on Thursday in Nashville.