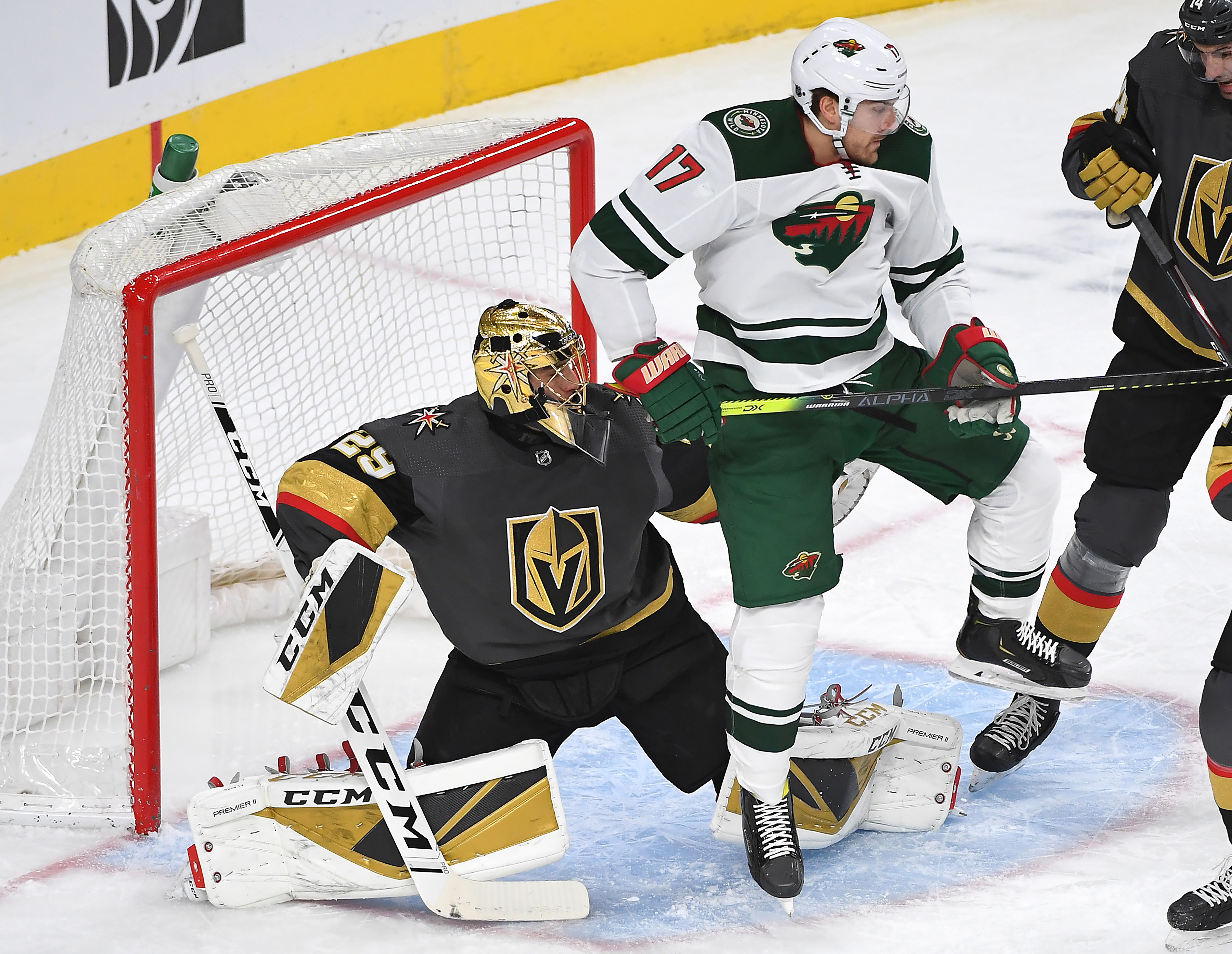 Minnesota Wild Head Coach Bruce Boudreau often talks about breaking an NHL season down into weeks and often will mention that the key to success is winning the week.  The Wild went 3-for-4 last week, but Sunday’s 3-2 loss to Colorado kind of made it feel like big loss in part because being out of the playoff picture you know even the slightest stumble often ends up punishing you 3-fold in the standings.

Vegas is trying to hold onto the magic in a bottle it caught during its inaugural season and while the playoffs seem to be likely for the Golden Knights they don’t want to just get there, they want to have another long run.  Can the Wild back onto a winning track with a victory over Vegas?

1st Period Thoughts:  If there was any wonder if tempers might be high after the Wild heard an ultimatum from its General Manager Bill Guerin this morning, the Golden Knights Ryan Reaves leveled Mikko Koivu with an open-ice hit.  That drew the ire of Ryan Hartman who more or less got wrestled to the ice as he challenged Reaves and Hartman would get a double-minor for roughing while Reaves just got a single giving Vegas an early power play.  Minnesota’s penalty killers did a good job of challenging the zone entries and forcing turnovers in the process and Vegas spent nearly 3/4ths of the power play just trying to get set up in the offensive zone.  The Wild would get the kill and they would try to go back on the attack.  A turnover in the neutral zone by the Golden Knights would result in his first opportunity as Mats Zuccarello set up Alex Galchenyuk for his first shot, a hard one-timer that was steered aside by Marc-Andre Fleury.  Minnesota kept applying pressure and they’d draw a penalty as Jon Merrill tripped up Zach Parise.  On the power play the Wild looked like they cashed in right away as Eric Staal‘s shot went off the left post but the puck sat on the goal line and kept moving across but not quite enough and it was immediately waived off.  The replay showed the puck was just millimeters from completely crossing the goal line so it was a good call by the officials.  Yet as the Wild players sort of froze as they were stunned the ‘goal’ didn’t count the Golden Knights counter attacked shorthaned and Reilly Smith was denied on a breakaway by Alex Stalock.  Minnesota would go back to work with the rest of the man advantage and Joel Eriksson Ek would bury a rebound chance to give the Wild a 1-0 lead.  The Golden Knights would try to press for the equalizer with its top line as Mark Stone set up Max Pacioretty for a spinning shot that was redirected by the hustle of Staal.  The physical play continued as Matt Dumba was crushed along the boards by Reaves but Dumba would retaliate with a poke check to the seeds that sent the Golden Knights’ tough guy to the ice in pain.  The Vegas training staff attended to Reaves but no penalties were called as both benches were chirping each other and promising some kind of physical payback.  A few shifts later, Reaves again took a shot at Koivu in the open ice but Mikko only chirped back instead of retaliating physically.  An unsportsmanlike penalty on Jonathan Marchessault would prove costly for Vegas as the Wild would cash in on the power play as Minnesota worked a shot on goal as Kevin Fiala tried to pounce on a backhander which Fleury stopped but the rebound was swept up and stuffed home by a pinching Jared Spurgeon.  2-0 Wild.  Not even a minute after Spurgeon’s goal, Marcus Foligno would clear a puck up into the stands for a delay of game penalty giving Vegas its 3rd power play of the game.  Minnesota’s penalty killers did a good job of denying time and space and not letting Vegas get comfortable with the man advantage.  The Golden Knights tried to raise their physical game and Minnesota weathered the storm as scrums continued after the whistle.  Jordan Greenway would knock down Alex Tuch with a bit of a blindsided hit and earned a roughing penalty with a little over minute left in the period.  Minnesota’s penalty killers were a bit frantic but some timely poke checks and some good saves by Stalock kept the Wild holding onto a 2-0 lead going into the 1st intermission.

2nd Period Thoughts:  The period had a little bit of everything.  Minnesota’s penalty kill was very sharp as the Wild set the tone early to kill off the remainder of Vegas’ power play from the 1st period.  The penalty kill did a great job of not giving the Golden Knights time and space in the Wild end.  Meanwhile, the Wild were pesky offensively as they used their defenseman effectively to keep pucks in the Vegas zone and yet not being reckless.  The Wild power play continued to build momentum for the home team by being active and setting up a number of quality scoring chances.  Minnesota didn’t let up and the top line would have one of their best shifts of the season, outhustling and outworking the Golden Knights.  Fleury did all he could including making an incredible stop with his back to the goal but the Wild continued to attack and it was Fiala who gathered up a loose puck and fired it home to give Minnesota a 3-0 lead.  At the other end of the ice, Stalock made a few high quality stops, including a denial of William Karlsson on a breakaway to keep Minnesota in control of this game.  Minnesota’s power play continued to light the lamp as Staal set up Parise from beneath the goal line for an easy bang-bang goal.  4-0 Wild late in the 2nd period.  The Wild were backchecking diligently and Vegas could never seem to get into any kind of flow.  The closest the Golden Knights came to putting a dent into the Wild lead was a wrist shot by Tuch that deflected off the shoulder of Stalock and rang off the post and stayed out.  The home crowd gave an appreciative cheer as their team was carrying a 4-goal lead going into the 2nd intermission.

3rd Period Thoughts:  The Golden Knights would swap out Marc-Andre Fleury between the pipes for Malcolm Subban as they were in search of some kind of spark.  Minnesota was content to work pucks deep and wait for turnovers in the neutral zone to attack upon.  Vegas would try to raise their tempo, but the Wild were checking tightly and shots were hard to come by.  The Wild’s passive 1-2-2 was forcing some turnovers and Minnesota would catch the Golden Knights pinching a bit and had a few chances to extend their lead including a partial breakaway for Parise that was dismissed by Subban.  Minnesota was in complete lock down defensively, tying up Vegas skaters whenever they were near the Wild crease.  As the time steadily evaporated off the clock, the objective was pretty clear.  Finish this game with a shutout as Vegas was throwing any pucks the could on goal hoping spoil the opportunity.  But the Wild circled the wagons around their goalie and skated away with a 4-0 victory.

RW – Shawn Boudrias (Cape Breton, QMJHL) ~ the power forward might want to be careful after tallying an assist and receiving a match penalty for kneeing in Cape Breton’s 6-4 win over Drummondville.  No word yet on whether he’ll receive a suspension for the hit.  Boudrias has 27 goals, 62 points, 65 PIM’s and is a +33 in 47 games.

RW – Matt Boldy (Boston College, H-East) ~ the Massachusetts-native is starting to heat up as he had a goal and two assists on 5 shots in Boston College’s 7-2 thrashing of Harvard on Monday.  Boldy has 3 goals, 14 points, 6 PIM’s and is a +4 in 26 games.