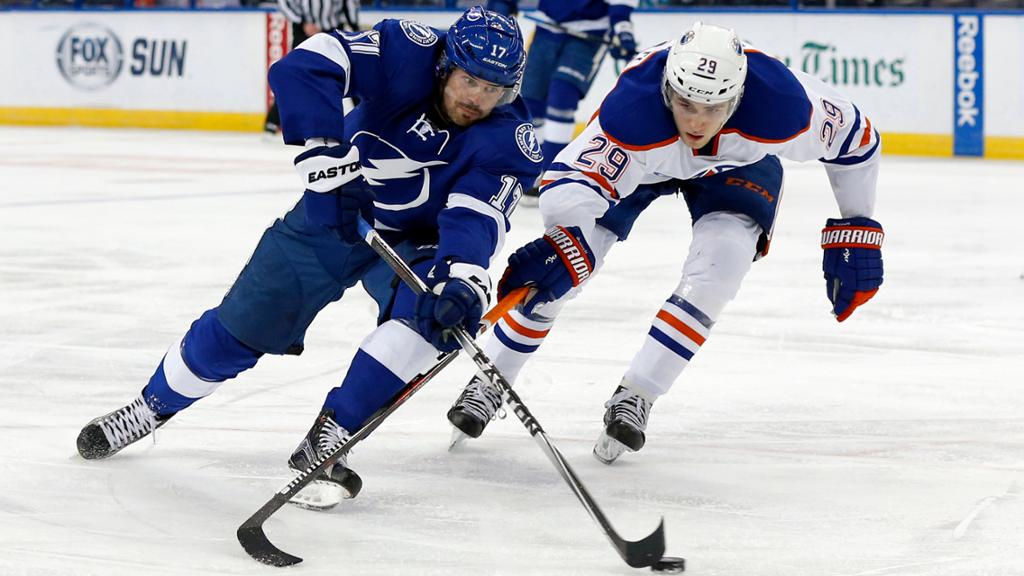 The Edmonton Oilers kick off their toughest road trip of the season tonight as they pay a visit to the Tampa Bay Lightning. It is the first of two meetings between the teams this season. The Lightning are the last team the Oilers will face for the first time this season.

The Oilers are coming off of an impressive 5-3 victory, without Connor McDavid, on Tuesday night over the Chicago Blackhawks. The Bolts, meanwhile, grinded out a 2-1 overtime victory in Pittsburgh Tuesday night.

Mike Smith gets the start for the Oilers, while Andrei Vasilevskiy gets the go for the Lightning.

Edmonton: Buckle down defensively. The Oilers made far too many mistakes and were careless with the puck on Tuesday night. Luckily, they were able to outscore their mistake against a Blackhawks team that bleeds goals against. Odds are, that won’t happen tonight. The Oilers need to play a tight defensive game and limit the chances against the best they can to have a chance.

Edmonton: The Oilers need someone from their makeshift second line to step up. The best bet? Sam Gagner. Playing left wing on this new line, Gagner has the most skill and is the quickest of the trio. The Oilers need him doing his thing in the offensive zone. For all his faults, Gagner is still an effective offensive player. Can he step up while McDavid sits for a second straight game?

Tampa Bay: Kevin Shattenkirk inked a deal with the Lightning shortly after the Rangers bought out his contract in the summer. He’s been a really good fit with the Bolts. Shattenkirk adds even more speed, skill and mobility to a dynamic defensive group. Tonight, Oilers fans get their first chance to see him on this loaded Tampa Bay roster.

Connor McDavid (quad) remains out and will miss the entire three-game road trip. James Neal (foot) was placed on IR Wednesday while Tyler Benson was recalled from AHL Bakersfield. Kris Russell (concussion) and Joakim Nygard (hand) remain on IR. William Lagesson is scratched on defense, while Benson will also sit.

Anthony Cirelli (lower-body) and Nikita Kucherov (lower-body) both left Tuesday’s win early and did not return. They will both miss tonight’s contest, per coach Jon Cooper. Steven Stamkos (lower-body) is listed as day-to-day and also will not play, while Ryan McDonagh (lower-body) is currently week-to-week.

“I had a feeling our team would come out and play hard tonight,” Head Coach Dave Tippett said Monday night. “Missing Connor is a big piece out of our lineup, but I thought guys really stepped up and competed hard. Every team’s going through some adversity, some with injuries, and we’re no different than that. That doesn’t mean we can’t compete hard and try to find ways to win. That’s what it’s going to be for us from now on.”

The Oilers have been on fire in the 15 games since they recalled forward Kailer Yamamoto. The club is 10-3-2 in those games and has outscored their opponents by a 63-46 margin. It’s been a run good enough to push them into second place in the Pacific Division.

The Oilers, per the club, are averaging 4.17 goals per game on the road in their last six away from Rogers Place. Overall, the Oilers are 14-6-2 against the Eastern Conference this season.