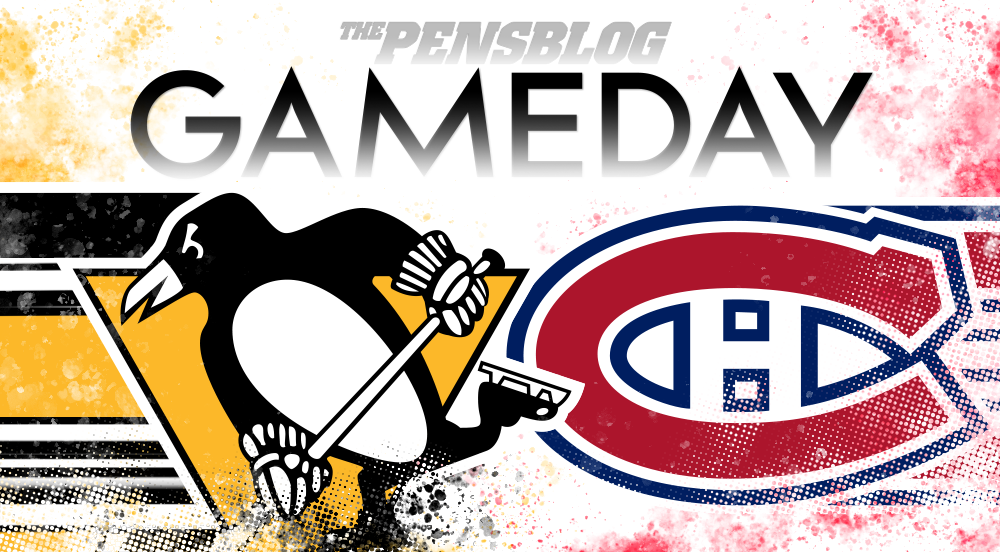 Welcome back to Penguins Hockey, the only hockey that gives the Penguins an extra day off after a home game to prepare for 4 of the next 5 games being at home.

The Penguins enter tonight’s Valentine’s Day matchup with the Habs on the heels of a hard fought 2-1 OT loss against the Bolts, which just so happened to be Jason Zucker’s first as a Penguin.

As mentioned, the Penguins play 4 of their next 5 games at home and 3 of those 4 come against teams deep in the hole outside of the playoff picture.

The first of such games is tonight against the Montreal Canadiens on “French Language Night” at PPG, which is just an excuse for Max Talbot to show up, probably go to the South Side, and relive his glory days of a decade ago.

The Penguins enter tonight’s game having going 6-3-1 in their last 10.  They sit 5 points back of Washington, winners last night in Colorado, with two games in hand.  With games against Montreal, Detroit, Toronto (x2), and Buffalo, the Penguins could find themselves at the top of the Metro before traveling to Washington on the 23rd.

But if they’re going to do it, it’ll be without the services of John Marino (face), Brian Dumoulin (ankle), and Nick Bjugstad (core), none of whom are skating yet.

Fortunately, as of late, the Penguins goaltending has been papering over those cracks with Murray returning to his form from last season and Tristan Jarry swinging back in the positive direction.

Update: Murray has continued his solid play stopping the puck over the last month+, while Jarry's decline leveled out before swinging back in the positive direction in his last few starts. If the Pens are to survive without Dumo/Marino, these two will need to continue this play pic.twitter.com/EtU32zABmO

As mentioned above, if the Penguins are going to survive without their 2 of their 4 best defensemen, it’s going to be on the shoulders of Matt Murray and Tristan Jarry.

On another positive note, the extra day off afforded the Penguins an extra day to get Zucker acclimated with Sidney Crosby.  The line of Zucker-Crosby-Simon looked extremely good when put together in the 3rd period on Tuesday night.  In just under 5 minutes of 5-on-5 time together, they doubled up the Bolts in shot attempts (8-4), with a 7-3 edge in unblocked attempts.  With respect to actual shots on goal, they owned a 6-2 advantage, generated 3 scoring chances (1 high danger), and owned 59.88% of the expected goals.  It was a short period of time, but there was a lot to like about the game they played.

Zucker, by his own admission, didn’t have his hands going, but really settled into the game alongside 87.  There’s no reason to think that won’t continue as they get more time together.

Needless to say, Zucker was relieved to simply get some practice time in on Thursday with his new team and get familiarized with the systems and details.

“It was great,” he said. “It was good just to be out there with the guys again and see how they practice and just try to handle the puck a little bit. I don’t know why, but it feels like it’s been a month since I’ve touched the puck (laughs). It was good to get out there and get a good skate.”

Zucker could already see the difference from the first period to the third period of Tuesday’s game in terms of getting acclimated, and he’s excited to see how he continues to progress with time.

“Throughout (Pittsburgh’s) system, they’re reading plays a lot quicker and trying to get out of the zone quicker and using that tempo and pace,” Zucker said. “Whereas in Minnesota, everything was a little bit different with how we broke out the puck and different plays. It’ll just be getting used to that, but I think even from the first to the third was a little better. So I think from game one to game five will be a big adjustment. It will be great.” – via the Penguins website

The Penguins also got a boost as Dominik Kahun, out since suffering a concussion on January 19th, returned to practice in a non-contact capacity.

As for the Canadiens, well, they’re in bad shape.  With a record of 27-25-7, they sit 7 points back of Toronto for 3rd place in the Atlantic and 10 points back of Philadelphia, currently occupying the 2nd Wild Card spot.  They’re 6-4-0 in their last 10, but losers of their last 2.  They have been better away from home this season, boasting a 14-10-3 record away from the Bell Centre (13-15-4 at home), but got some bad news earlier this week as Shea Weber is set to miss the next 4-6 weeks with a sprained ankle.  There was talk swirling that, after blocking a shot leading to the injury, that he would miss the remainder of the season and maybe end his career, but that ended up just being bullshit.

MEDICAL UPDATE: Shea Weber expected to miss 4 to 6 weeks with an ankle sprain.

They are simply not a good hockey team and got significantly worse without Shea Weber.  If they continue to sink down the standings, you would expect them to sell off some assets, starting with Tomas Tatar, who leads the team with 20G-32A-52P through 59 games this year.

Via Wave Intel, we can get a snapshot of how these two teams stack up against one another across various data sets.

While the Penguins score more goals per 60 minutes of 5v5 play than the Habs, Montreal has actually generated more in the way of shot attempts, scoring chances, and high danger chances per hour of play.

The Penguins, though, have had better goaltending and suppression numbers this year, though with the omissions of Dumoulin and Marino and the elevated role Jack Johnson has had to take on, the Penguins have seen a drop off in their defensive superiority relative to the rest of the league.

The difference, then, may be in the special teams battle tonight.  Montreal has been shorthanded 179 times this season, 12th most in the league, killing off 79.3% of them (17th best).  Compared to the Penguins (7th best PK at 82.8%), the Habs give up a ton of shot attempts, scoring chances, and high danger chances against when shorthanded.

At 5v5, ZAR is 2nd, Tanev 4th, and Blueger 5th among regular forwards (400+ minutes) in scoring chances against per 60. I know they aren't scoring much, but they are allowing absolutely nothing to happen against them. No way Sully breaks them up.

So, while the Penguins powerplay (15th – 19.9%) has looked like dogshit a lot this year, they’re still capable of generating when on the man-advantage.  The Penguins have also been on the powerplay 3.19 times per game since the calendar turned to 2020, 7th most in the league.  Deploying players like Brandon Tanev, Patric Hornqvist, Evgeni Malkin, Sidney Crosby, and now Jason Zucker that draw a lot of penalties, playing against a PK like Montreal’s could be what the doctor ordered.