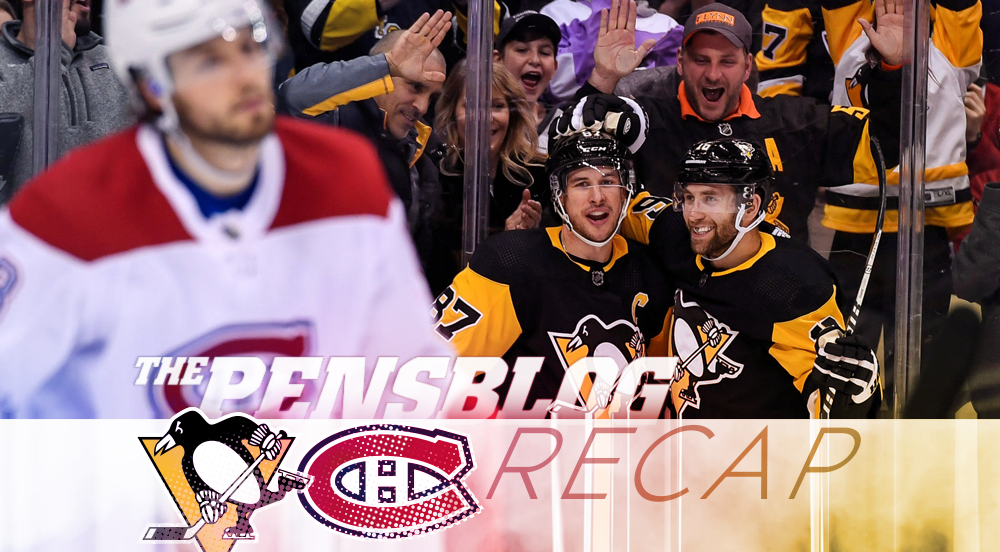 The Penguins hosted the hockey club from Montreal last night for a little Friday night, Valentine’s shimmy and shake. Max Talbot was in the house to announce goals in French with the help of the Pittsburgh-based Duolingo app to celebrate French Language night. Following their OT loss to Tampa on Tuesday night, the penguins didn’t have many changes to announce. Dominik Kahun started skating again which was the only upgrade on the injury front. With that in mind the team laced up as such for this one:

The comments to this tweet were a bunch of people without two Stanely Cup rings earned as a coach criticizing the coach with two Stanley Cup rings about his lineup decisions in a February regular-season game.

Sticks down, pucks down, we were… underway? If you were finishing up Valentine’s dinner you didn’t miss much in this period. 7 minutes in Marcus Pettersson was called for hooking but the Penguins easily killed it off. Montreal is just one of those teams that you remember exist only when the Penguins play them. They probably won’t cross my mind again until next year. “BuT wE hAvE tHe MoSt CuPs,” yeah, winning 20 championships with 6 teams in the league is like celebrating “worlds greatest dad” mugs when you’re the only dad the kids have for reference. Anyway, I’m not sure where that came from but the first period ended scoreless. The Penguins had 14 scoring chances while the Canadiens had 9 of their own.

Here's a look at your 1st period stats ⬇️ pic.twitter.com/JAtlP9yXLF

As the second period started your mind was probably drifting off a bit. It’s not because you are a bad fan, it’s because Montreal is the drying paint of the NHL. Fortunately for our sanity, Ilya Kovalchuk took a penalty 5 minutes in and the Penguins got their first look on the powerplay. After some solid possession, and all four penalty killers crashing the corner, the puck came to Crosby. Sid took advantage of no defenders in the passing lane to send a pass over to Bang Bang Kris Letang

BUT! (That means goal in French).

ALL FOUR Canadiens are in the faceoff dot to start this gif. This looks more like 5-year-olds playing soccer with the “beehive” effect than an NHL team. Carey Price was in perfect position for this and Letang just wired it right over the glove. If this was Murray it would be because he sucks with his glove. Since it is Letang, it’s a perfect shot. Letang is slowly closing in on his career-high 16 goals he has hit twice in his career, most recently last year. Two minutes after the goal the Penguins would get a second chance on the powerplay as Ben Chiarot slashed McCann. This powerplay wasn’t as successful, but the back-to-back powerplays resulted in a good amount of momentum that carried over for a large chunk of the period. The Pens were tilting the ice for a solid 7 minutes before ZAR was hit with a tripping call. The Pens killed it off and got right back on their bullshit. As Montreal tried to keep possession in the offensive zone Dom Simon made a nice poke to get the puck free. Crosby took it from there and was off to the races. It was a scene we’ve seen a million times, Crosby flying down the wing with three defenders on him only to make a perfect pass through a collection of legs and sticks to the tape of an awaiting forward. The awaiting forward this time was the new man in the sweater, and before he could say “holy shit what a pass” he made sure he buried the biscuit first.

First thing first, kudos for Zucker to be ready to shoot this puck. Remember this guy has been playing with Diddly and Squattac as linemates his whole career so getting for this puck isn’t something he was actually expecting. I mean look at this situation:

This is just vintage Sidney Crosby, and he knows it.

I’ve slowed this tape down and I can assure you Crosby makes this face as soon as the puck passes through Chiarot’s legs. He knows at that moment that he’s done it again. And this is the look of a man that just realized the passes he will be receiving for the next 3 years.

22 seconds after the goal Patric Hornqvist was called for slashing. This may seem like an annoying penalty to take, but it offers some refreshing news. Mike Sullivan actually trusted the 4th line and put them out after a goal. The Penguins penalty kill didn’t look as sharp this time around, and after the Canadiens set up shop Tatar was able to squeeze one through Jarry to make it a one-goal game.

Not an ideal goal for Jarry to let up but I don’t criticize powerplay goals against and I won’t start now. Following the goal, the Penguins went right back to work as if it never happened. This time it was Marcus Pettersson driving down the wing, you read that right, and he sent the puck to the center of the zone where it found a Jason Zucker wearing a Brett Kulak. The added weight had no effect on Zucker, who put his blade on the puck and notched his second of the game.

At this point, Jason Zucker is thinking “Jesus titty fucking christ even the defensive defensemen are feeding me gems.” Crosby made the breakout pass to Pettersson by the way, notching his third point of the game. Mike Sullivan is excited about his new top trio

The Penguins would not be able to score again in the remaining 18 seconds and the period would end with a 3-1 lead for the home team.

The Penguins have quietly become a shutdown third-period team when they have the lead. It isn’t always a pretty period, like the one earlier this month against Washington, but so far they’ve been effective. This game was no different as the team continued their ferocious forecheck and pressure. Montreal definitely got their looks in the period but Tristan Jarry once again rose to the occasion.

Despite getting 21 scoring chances for in the period, Jarry and the Penguins were able to shut down Montreal. They pulled price with over two minutes left and that is the Blueger lines music. If you’ve ever played hockey or soccer you’ve definitely done the three-man weave drill. You reluctantly go through the motions wondering about their practicality. The ZAR-Blueger-Tanev line did a three-man weave up the ice perfectly to put the game out of reach.

The Habs would be the Hab nots in the remaining two minutes as the penguins would shut the door on a 4-1 victory.