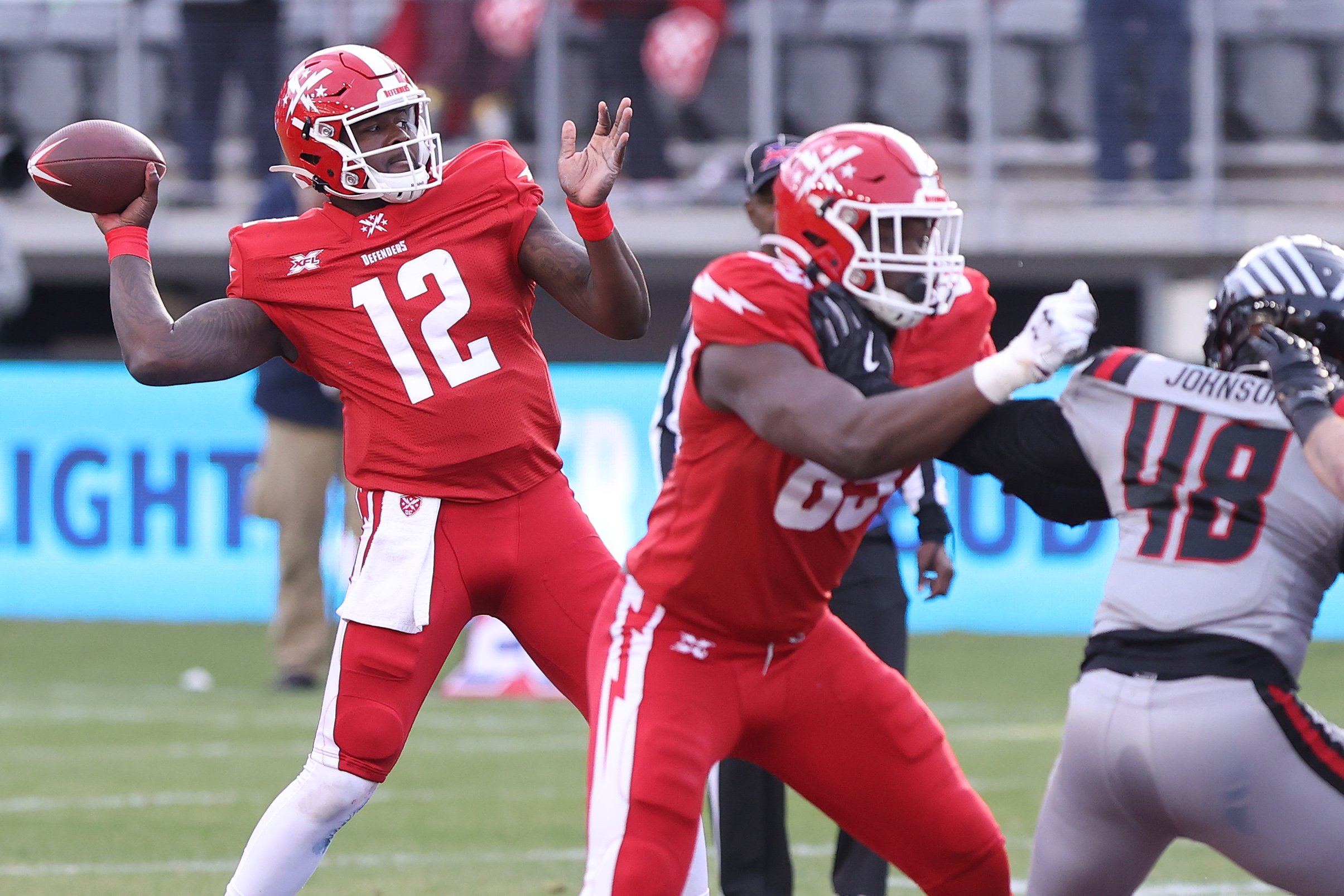 With two weeks officially in the books for XFL 2.0, it is a perfect time to unveil, hopefully, the first of many quarterbacks rankings for this season.

Despite what the critics said this weekend regarding horrific quarterback play in the XFL, there has been a significant amount of good QB play that should be getting recognized too.

Starting quarterbacks Cardale Jones (D.C. Defenders), P.J. Walker (Houston Roughnecks), and Jordan Ta’amu (St. Louis Battlehawks), have all put on exciting performances throughout the first two weeks of the season in their own ways.

Along with those three quarterbacks, we saw veteran quarterbacks Josh Johnson and Landry Jones make their respective XFL debuts against each other on Sunday afternoon.

Jones got the upper hand on Johnson, leading the Renegades to their first win of the season. But the Wildcats should be alright with Johnson under center for the rest of the season.

That being said, here are our inaugural XFL quarterback rankings heading into Week 3:

To be brutally honest, the top spot in this week’s quarterback rankings could have gone to either Walker or Jones. Both quarterbacks have been outstanding this season and one of the main reasons why their respective teams are undefeated.

In terms of Walker, the former Temple Owl standout has thrived in head coach June Jones’ air-raid offense. In Week 1 against the Wildcats, the mobile quarterback put on a show, completing 61-percent of his passes for 272 yards, four touchdowns, and an interception.

Walker’s favorite target from that game was wide receiver Cam Phillips, who had four receptions (eight targets) for 67 yards and a touchdown. The former Temple signal-caller also added 26 rushing yards to his award-winning week.

On Sunday evening, Walker was looking to duplicate or best his Week 1 performance against the St. Louis Battlehawks. While he could not accomplish that feat, Walker still completed 65-percent of his passes for 170 yards, three touchdowns, and zero interceptions.

Just like Walker, you can make a legit case for Jones to be an MVP candidate. Under the direction of head coach Pep Hamilton, the former Ohio State quarterback has looked solid in his first two XFL starts.

In Week 1 against the Seattle Dragons, Jones completed 62 percent of his passes for 235 yards, two touchdowns, and zero interceptions. He also had 28 rushing yards and was only sacked once.

Jones, then followed up his Week 1 performance, with an even better Week 2 outing against the New York Guardians at Audi Field.

The big-arm quarterback completed 62 percent of his passes for 276 yards, two touchdowns, and an interception. Jones’ first touchdown pass came in the first quarter as he threw an absolute dime to wide receiver DeAndre Thompkins in the back corner of the endzone.

In the fourth quarter, Jones channeled his inner Patrick Mahomes-Deshaun Watson on a third-down pass to Thompkins after losing the football momentarily.

While all the attention has been on the play of Jones and Walker thus far, Ta’amu has made noticeable waves in St. Louis.

During his senior campaign, the dual-threat quarterback completed 63.6 percent of his passes for 3,918 yards, 19 touchdowns, and eight interceptions. He also racked up 342 rushing yards and six touchdowns.

With those types of abilities, you would think that Ta’amu would be an option for the NFL. But he wasn’t and latched on onto the Houston Texans’ roster for training camp, who cut him after the final preseason game.

Nevertheless, it seems as if the 6-foot-2 signal-caller has found new life under the tutelage of head coach and general manager Jonathan Hayes.

In their Week 1 win against the Renegades, Ta’amu made plays with both his feet and arm. The former Ole Miss QB completed 74 percent of his passes for 209 yards, a touchdown, and zero interceptions. He also added 77 rushing yards on nine attempts.

On Sunday, Ta’amu completed 81 percent of his passes for 284 yards, three touchdowns, and two interceptions. He also added 32 yards on the ground and a score.

The two interceptions that he threw were not pretty, but there’s still a lot to like about his game and skill set going forward.