Recap 58: At Least You Have the Boxing Day Parade 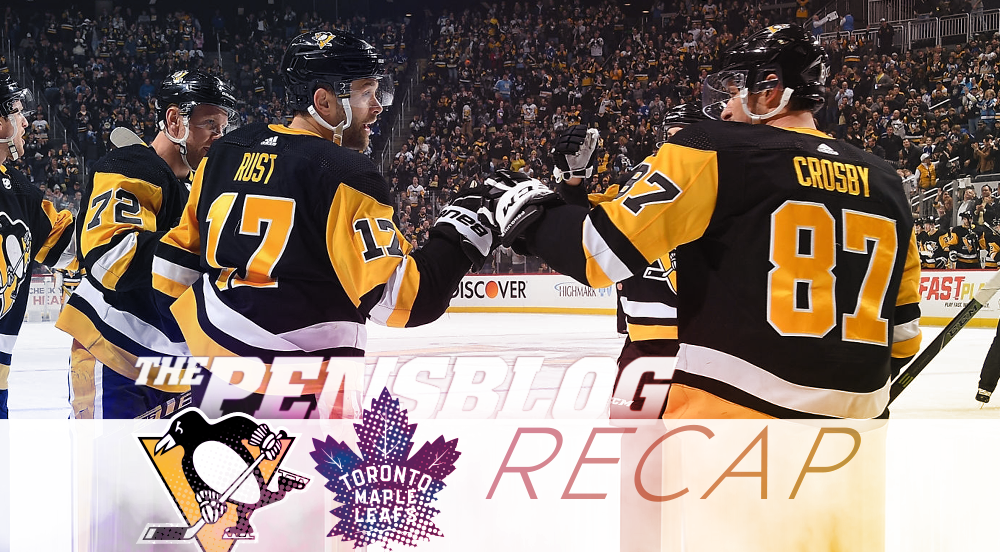 Recap 58: At Least You Have the Boxing Day Parade

The Penguins played host to the Toronto Maple Leafs last night. The game was supposed to be a measuring stick game for both teams. One team checked out and one team remains on the hamster wheel. One team took over the Metro and the other is “in the playoffs” at the moment thanks to a 2 point lead with 2 extra games played over the Panthers. One team his hungry for the cup, the other has more passionate fans than players. Dominik Kahun returned to action following his concussion just as ZAR was labeled as “week-to-week.” That was all good and well but then just prior to game time Malkin was scratched as a few losers online thought maybe he was finally traded. With Geno out the lineup was as such:

We have a lineup change.

Evgeni Malkin is a late scratch.

Yeah, the media is probably right instead of the players

Less than a year after this post that same Malkin was holding a cup.

Sticks down, pucks down and we were underway. There was just that feeling heading into this game that it was a big two points. You could also tell that the Penguins felt this too from the opening faceoff. They just had that step to their game. They knew a win put them in first in the division even if the players downplayed it. Two minutes in Sam Lafferty took a tripping penalty and Toronto had a chance to do something with their lives but they once again fell short. Following the kill, the Penguins went back to dominating for 9 minutes until DmytroTimashov, which is not spelled wrong or right, took a penalty. The Penguin’s powerplay needed negative seconds to get to work, and it was the Rusty one getting the Pens on the board.

Sidney Crosby was on another level all night. Think about that. It’s Sidney Crosby. We’ve been watching him since 2005 and we are still saying he was on another level. This pass is how babies are made. If you want to know how the rest of this game went just keep rewatching this gif. If you want to keep making fun of Toronto, scroll on my friends. The Penguins took that goal and slammed the gas pedal to the floor. After another 6 minutes of the Penguins show it was the 4th line making it 2-0.

A beautiful start to @Anthony_Angello's goal scoring in the NHL. pic.twitter.com/RKLuJ4iJ1P

Congratulations to Anthony Angello on his first NHL goal. This play made possible because of Sam Lafferty’s desire to just shoot the damn puck. This was Lafferty’s 43rd game of the season and is currently his third call-up. The first call up he was great, the second invisible, the third solid. Laffy Taffy has put together a solid first NHL campaign. The Maple Leafs were saved by the buzzer and finished the frame trailing by 2.

Here's a look at your 1st period stats ⬇️ pic.twitter.com/xXuSWPEpVf

Good hockey teams use the intermissions to fix mistakes and come out better in the next period. The Maple Leafs used their break to go over the same game plan that they started with. Two minutes in the Kerfoot was hit with a slashing call and the Penguins powerplay went back to work. This powerplay was a lot like the last powerplay. Give the puck to Crosby and let him find a wide-open player. Rinse, Wash, Repeat, Zuck me Silly.

Rust and Crosby just dissected the Maple Leafs powerplay with two of the crispest passes you will see. This feed from Rust to Crosby is KFC level crispy. Watch it again. I’m not kidding, I’ll wait. Bryan Rust man, what a pass. The Penguins kept churning and the Leafs kept burning. Four minutes after the goal Jason Spezza reminded everyone that he is still in the league by taking an interference penalty. The Penguins powerplay went back to work and couldn’t possibly go 3/3 could they? Could they??? Yeah they could, because Sidney Crosby has logged on.

Since returning from injury, Sidney Crosby has picked up 22 points (7G-15A) in 13 games. 🐐 pic.twitter.com/PGRIMLM3Dw

As Toronto fans broke furniture out of anger Toronto women snuck off to the bathroom for some alone time. It was Jared McCanns turn to fire a bullet of a pass as the Penguins just toyed with this Toronto team. Following the powerplay, the Maple Leafs continued doing whatever it is that they are doing and the Penguins continued dominating. This only lasted for two minutes however before Anthony Angello was called for tripping Kerfoot which is a weird thing to type out. During the kill, Bryan Rust was hit with a delay of game penalty and the Leafs had a 5 on 3 powerplay chance to stop the bleeding. The Leafs wouldn’t stop the bleeding. The Penguins would kill off the penalties and slit the throats.

Fourth point of the night for Crosby. 5th goal of the night for the Penguins. What a team. The Maple Leafs would score two goals in the remaining 7 minutes of the period because they wouldn’t really be the Maple Leafs without giving their fans the tiniest glimmer of hope to carry on to the next game. Auston Matthews notched his 43rd at 16:35 and Kyle Clifford scored at 18:01. That would do it for a second period that the Penguins were not messing around in. What. A. Team.

Sullivan has been preaching about the importance of holding leads in the third period and this game served as great practice for that. The Penguins did just that, not only keeping Toronto off the board but really just keeping them out of dangerous situations to start with. Time would tick down, and not much happened. Welcome to the black parade Toronto.