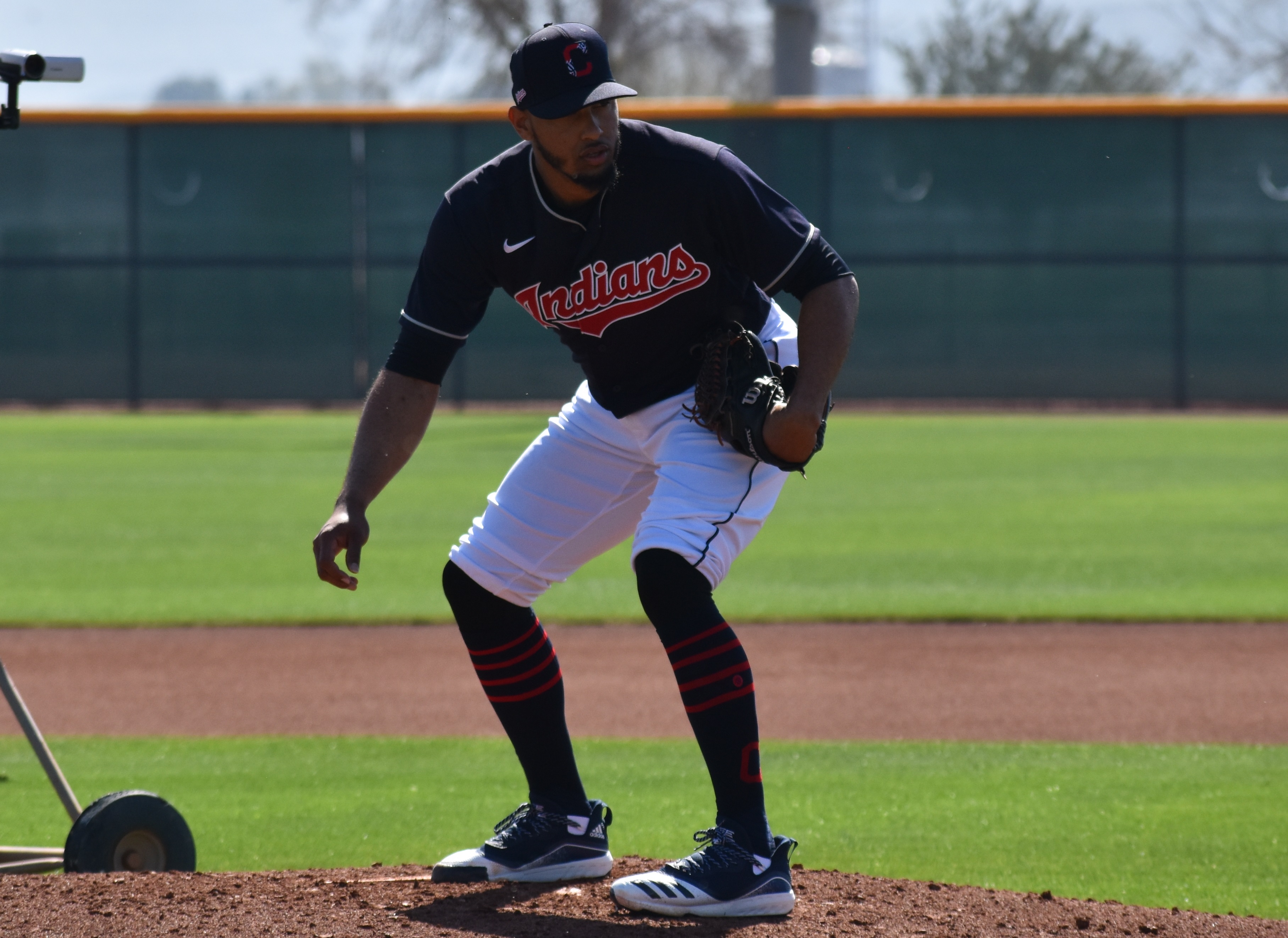 Continuing on with our look at the Cleveland Indians twenty 2020 non-roster invitees, today will take a look at the bump. This is by far the largest group this season as nine pitchers have been given numbers between 80 and 94 and the slightest of opportunities to break through with the big league club.

Even with the loss of Corey Kluber and Mike Clevinger‘s knee surgery, the rotation appears to be an impossible group to crack as 40 man roster players like Logan Allen, Jefry Rodriguez and Scott Moss would get shots long before any of the upcoming players. With that in mind, they will all be vying for the very limited spots available in the bullpen.

Starting with those players you may be more familiar with, five of the nine pitchers have been in the Indians farm system long term. The first of these is the 25 year old righty Henry Martinez. Martinez belongs to the throw hard and hope they miss school of pitchers and his 2018 season in Akron really put him on the map. With a 2.76 ERA across 32 appearances and a fastball nearing 100 MPH, for a moment he appeared to be closer material.

In 2020, however, things didn’t go so well as he struggled in Columbus so much that he was demoted to Akron in July and stayed there until the final week of the season. Martinez pitched well when he was back in Akron, but his K/9 fell to a career worst 6.1 there and his 7.2 for the entire season was his worst since 2015 in Mahoning Valley and Arizona.

While I was high on Martinez heading into 2019, there have simply been too many other great arms added/promoted since then to believe Martinez has any MLB opportunity with the Indians. Like many others on this list, this will be Martinez’s seventh season in the Indians system, making him a MiLB free agent in the upcoming off-season. The fact that he wasn’t taken in the 2019 rule 5 draft shows that no other team believed he could stick in the Majors for all of 2020 and I don’t believe he will be with the organization following this season.

Angulo warms up in the outfield prior to 2020 Indians MLB spring training practice. – Joseph Coblitz, BurningRiverBaseball

Looking at our checklist we have another 25 year old (he turns 26 next week), right handed relief pitcher who is entering into his seventh season in the Indians system and spent 2019 between Akron and Columbus. Angulo, however, had his best K/9 since 2015 with a 12.6 mark in 62.2 innings with almost all his success coming in Akron. His control is a major issue with a 5.5 BB/9 last year and 4.8 over 231.2 MiLB IP. The Indians have so many relief options at the moment that they can afford to be extremely picky and there is no chance they will run with Angulo unless he can figure out his command quickly.

Overall, Angulo is a smart pitcher and if he can be a little bit more aggressive with his pitches, he could have a Major League future. That future might not be in Cleveland, but if it is don’t look for him before September. Like Martinez, he went unclaimed in the rule 5 draft and he is likely to leave in free agency following the season.

This may sound familiar, but Cam Hill is a 25 year old right handed relief pitcher who is entering into his seventh season with the Cleveland Indians. He was hurt much of the 2019 season, but was with Columbus when healthy where he had an unbelievable 13.2 K/9. Previously more of a weak contact rather than swing and miss pitcher, Hill really stood out in 2019 and now looks to be a very real MLB option. He still isn’t among the elite arms available like James Karinchak, Emmanuel Clase or Nick Sandlin, but he could easily be a mid-season depth option in the pen.

Hill retires righties and lefties equally well, something that means more now than ever with the new rule changes, but has some issues with the long ball against lefties.

Like the three pitchers already listed, Robinson is a 25 year old right handed reliever who is in his final season before MiLB free agency and spent most of the 2019 season between Akron and Columbus. Like Hill, he saw a huge bump in strike outs last year, jumping from his previous career high in K/9 of 9.7 in 2018 to 12.5 in 2020. After methodically moving up the system prior to 2019, Robinson flew from Lynchburg all the way to Columbus last year with his greatest success coming in Akron.

Robinson struggled in the 2018 mixed level Arizona Fall League and continued to have issues with control throughout the 2019 season. He falls behind Hill, but above the other two relievers listed above when considering the Indians MLB depth in 2020, but should be a mainstay of the Clippers bullpen for the entire season. Unless something big changes, however, I don’t expect to ever see him in an Indians uniform.

And now, for something completely different. Siri is a year younger than the rest of the group to this point as he enters his sixth season in the Indians system at the age of 24. I have loved Siri’s stuff ever since seeing him in the 2016 Arizona League and his numbers from 2017 in Lake County made it seem like he could be the closer of the future.

He pitched just as well in Lynchburg in 2018, but had a rough run in the Arizona Fall League that year leading into an extremely effective 2019 season in Akron. Siri will almost certainly start the season in Columbus where we may learn if his wildness is only effective against younger hitters. Here he keeps with another common theme as he needs to reduce his number of walks if he wants the Indians to look at him at all, but at least he has two seasons to prove himself instead of the one that most of the other NRIs have.

Moving into the pitchers who were not initially drafted or signed by the Indians, we have the long and winding career that belongs to Kyle Dowdy. Dowdy initially came to Cleveland from Detroit in the Willi Castro deal. While he was generally used as a reliever with the Tigers, the Indians switched him to a full time starter in 2018 Akron. Following that season, they left him unprotected and he was claimed by Texas in the rule 5 draft.

In the Rangers bullpen, Dowdy walked more than he struck out and was eventually offered back to Cleveland. Back in Akron, he stayed in the bullpen and had a fairly effective season. He should start 2020 in Columbus where he can get the experience that he obviously needed before attempting a foray into the big leagues in 2019. We can reevaluate later in the season, but at the moment he seems best suited for long relief and has a poor chance of breaking into the Indians pen in 2020.

Stephens came to Cleveland mid-season 2019 as a MiLB free agent from the White Sox. He was pitching terribly in AAA for the Sox in AAA and went to Akron following his release from Chicago. He pitched very well in Akron (as he should have given his age, 27) as a reliever, but he was used exclusively as a starter in AAA and didn’t have a single good appearance. The Indians had so many injuries in 2019 between AAA and the Majors that it made sense to fill in the gaps with Stephens, but it doesn’t make sense anymore. I wouldn’t be surprised to see Stephens back in Akron in 2020 or potentially released before the season starts.

Gose is the most unique arm on this list for many reasons. First, if you’re thinking wasn’t there a center fielder on the Tigers a couple years ago named Anthony Gose, you’d be right and this is him. Gose converted to pitcher after five MLB seasons between Toronto and Detroit as an outfielder. He spent 2019 between Lynchburg and Akron where he racked up quite a few K’s as a reliever, but walked nearly as many as he struck out.

Continuing to work on catching up (he’s already 29), Gose pitched very well in the Puerto Rican Winter League and is now possibly getting his final chance to return to the big leagues. There is zero chance he breaks camp with the team, but his low 90’s fastball and solid slider make him an interesting option in Columbus. Due to his age, he’s not a long term option, but if he pitches well in AAA, it could be fun to see him join the Indians bullpen late in 2020.

The only truly new name in the bunch, Leone is 28 years old and has six seasons and 243.1 MLB innings under his belt. With a ton of experience, Leone gives the Indians another option to bring up in the time of need, but not a high quality one. Leone’s last good season was 2017 with the Blue Jays and before that it was his rookie year of 2014 with the Mariners. Beyond those, he has always been a below replacement level player at the MLB level.

Leone is a fantastic AAA reliever, however, and could help the Clippers should he stay on beyond spring training.