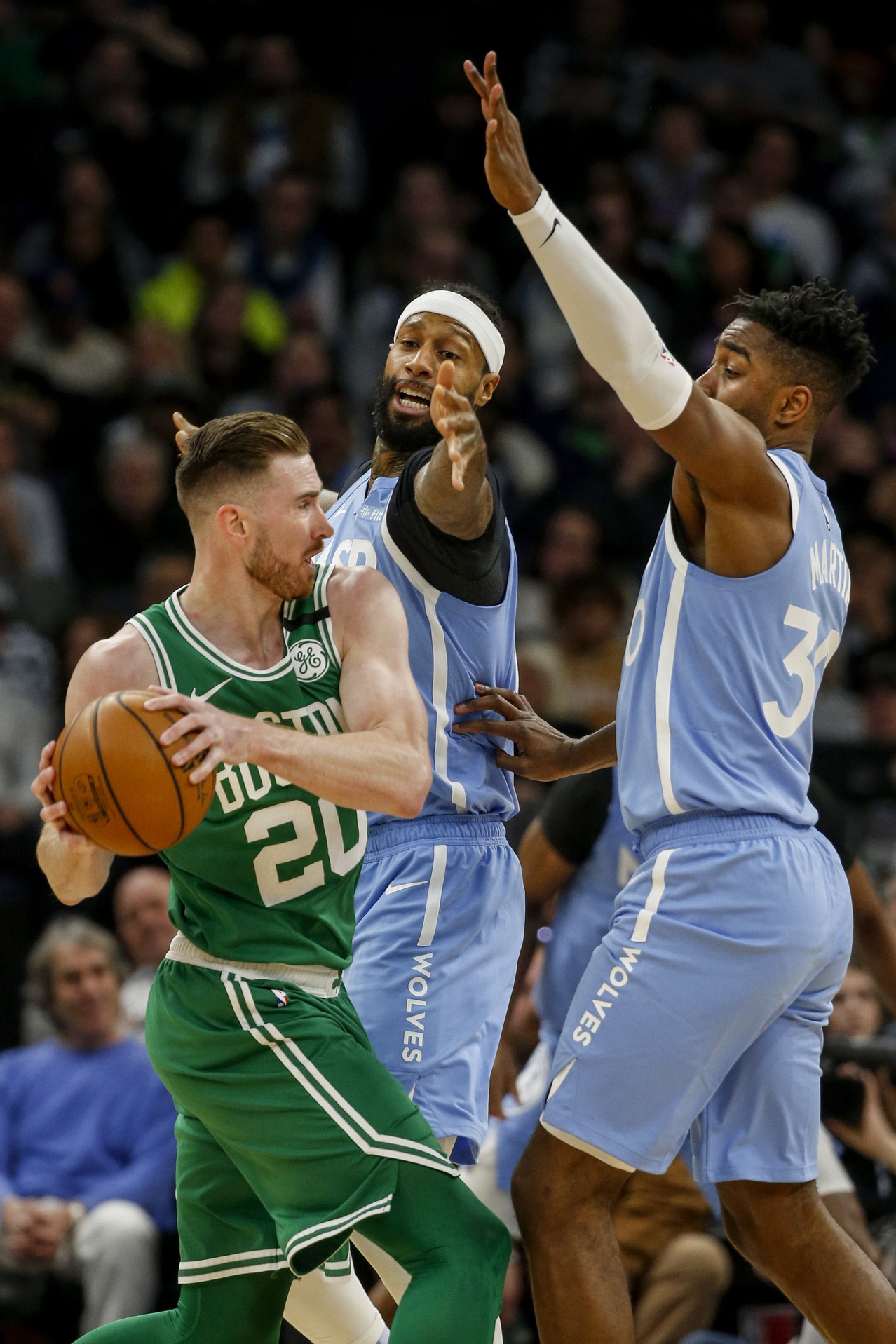 No Kemba Walker for the Celtics on the road against a Timberwolves team with no Karl-Anthony Towns? Are we thinking trap game?

Well…almost. Boston was often slacking on defense and still pulled out a 127-117 win, due almost entirely to Herculean efforts by the starting five. Gordon Hayward, Jayson Tatum, Jaylen Brown and Daniel Theis all eclipsed the 20-point threshold (29, 28, 25 and 25, respectively), with Theis and Tatum contributing double-digit boards as well (16 and 11) and Marcus Smart making up for poor shooting with 10 dimes (while still making it to 10 points). Smacking around a Minnesota team with zero shotmaking outside of D’Angelo Russell and Malik Beasley, our heroes didn’t look like one that could beat the dominant Lakers squad they face on Sunday…but A. Sunday is not today and B. they didn’t look prepared for the last Lakers game and we know how that went.

Surprising no one, Jayson Tatum showed the most intensity early on for the Celtics:

I think Jayson Tatum is gonna have some success against Hernangomez/Naz Reid.

Yeah, PnR scoring is just going to be too easy for Tatum against these bigs pic.twitter.com/9o89GLw9rX

Although Minnesota scored well enough to keep themselves in it during the first, Boston was clearly in control.

It started getting very ugly for the T-Wolves as soon as the Q2 buzzer rang. I follow more than a few of their fans on Twitter—all pretty great people—and they were Not Pleased:

Wolves have had good looks and a whole bunch of bricks.

Exactly. If the Celtics are barely working to stop your offense and it’s still a disaster, that doesn’t bode well. All that said, the following dunk by Josh Okogie was too cool not to post:

That kicked off a mini-run for the Wolves…which did not last and was quickly parried away by the Cs:

The Celtics have eight assists as a team so far, six of which came from Marcus Smart.

The Russell-Beasley backcourt kept the Wolves from entering blowout territory. That’s probably the best that can be said for them regarding how they did in the first half.

The Celtics are not playing very well defensively at all. They're lucky Minnesota is just terrible

Counter-counterpoint: The Cs had a double-digit lead on the Wolves for a good four minutes or so when the third quarter started…

Celtics only had three turnovers during the first half. Already four here in the first five minutes of the third quarter.

…but they were still playing pretty carelessly. That was going to bite them in the ass at least somewhat, eventually, and it did when the Wolves got within two points of the Celtics’ lead for the first time since Q1.

Theis was not in the mood to let this happen quietly, and begin letting loose on both ends of the floor despite CONTINUED DISRESPECT BY THE GODDAMN REFS.

Theis already with 17 points and 11 rebounds. He has a legit shot at his career-high in points (22) and rebounds (15) tonight.

Hayward was similarly galvanized in the latter half of the third:

Gordon Hayward leading the #Celtics with 13 FGAs. It doesn’t feel that way. He’s been efficient, 9/13 for 20 points, to go with 4 assists and 3 rebounds.

Then shit got hairy again in the fourth—partially because the Celtics were still taking it easy on defense, partially due to more than a handful of what I’ll generously say were 50-50 foul calls on Cs players. It was still a narrow Boston lead with about five minutes to go, and then:

Fortunately, the Wolves hadn’t scored a field goal for about three minutes before that happened, only managing to collect points at the charity stripe. Theis, Hayward and Tatum (and, in less glamorous but still notable ways, Smart and Romeo Langford) kept the ship floating en route to a W— harder than it should’ve been, but a W nonetheless.