Recap 59: The Parade is Back On 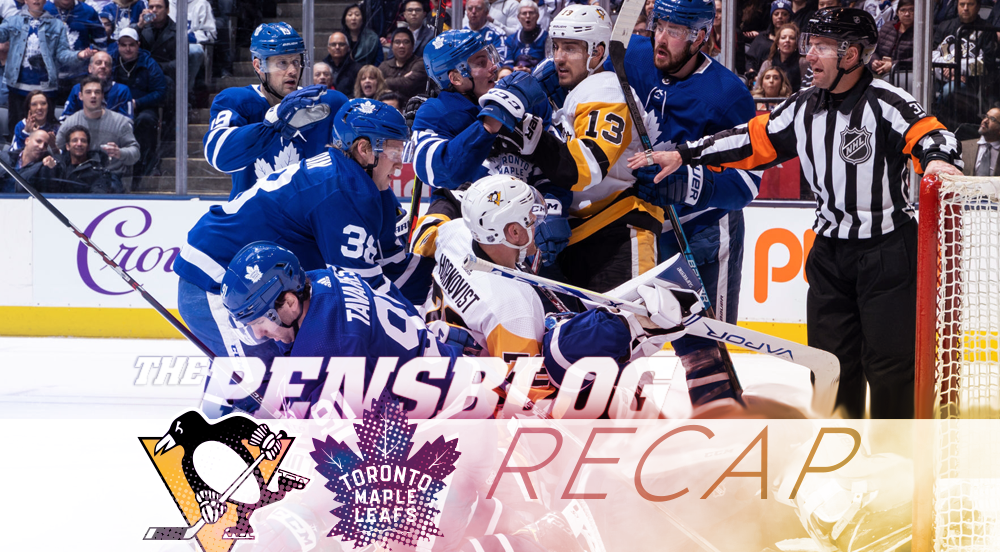 Recap 59: The Parade is Back On

The Penguins finished up a home and home series with the Toronto Maple Leafs last night. Two days earlier the Maple Leafs stormed into Pittsburgh for a measuring stick game that sent them back to Toronto with most of the fanbase wanting to fire the GM and bench players making over $2 million a year. I don’t know about you, but a highly skilled team getting embarrassed by another team only to face that same team again in front of their home crowd two days later is usually a response game. That’s what we saw in this one, but of course,

some of the weaker Penguins fans are melting down.

After sitting out Tuesday night with an illness Malkin was back in the lineup resulting in the following lines:

The Maple Leafs were ready to go in front of their home fans but the Penguins were prepared as well. For the most part, the first period was a lot of back and forth hockey with open chances for both teams. The Penguins received a late powerplay chance when the newest Maple Leaf Denis Malgin tripped Brandon Tanev 17:26 in. After going 3/3 Tuesday night on the powerplay against the Leafs the Pens took this first opportunity off. Fire up the “Malkin makes the powerplay weaker” chants. By the time the period would end we witnessed 18 minutes of 5v5 hockey that saw the Penguins generate 18 scoring chances for and the Maple Leafs 19.

The numbers after 20 minutes of play ⬇️ pic.twitter.com/Ozyzlm3yXR

The second period started the same as the first for the Maple Leafs, they continued playing wide-open hockey. The second period also caught up to the Penguins. Since Brian Dumoulin left the lineup and Jack Johnson took over the first line pairing, and especially since John Marino left the lineup, the Penguins defense has been bleeding scoring chances like congress spends money. During that span, the defense has been bailed out by the offense. Tonight wasn’t one of those nights, and what happened in the next 40  minutes is what happens when you have a subpar defense and no offensive support. Mike Sullivan summed it up in the post-game scrum:

Media: "Has there been a regression recently in defensive performance?"

Media: "What do you attribute it to?"

Media: "How do you restore it?"

Coach: "We have to go back to work. We have to recognize it & pay attention to details."

The Penguins held on for 7 minutes into the second before Jake Muzzin got the Leafs on the board.

Muzzin scores one of the most satisfying goals of the season.

Malgin with the screen. pic.twitter.com/ffNQcoo85w

Off the faceoff, Hornqvist gets caught watching the D to D pass before skating out to the point. Even with this hesitation, he gets in a decent position to block the Muzzin shot. Malgin with a picture-perfect screen, as the puck travels in front of Murray, Malgin skates right through his vision line. In the image below the puck is in front of Malgin, who is skating left to right.

Two minutes after the goal Marcus Pettersson was hit with a holding penalty and the Leafs powerplay went to work. Seven seconds into the powerplay Brandon Tanev threw the puck over the glass and went off for a delay of game penalty. The Maple Leafs went to work on the 5 on 3 and 30 seconds later William Nylander made it 2-0.

It's 27 goals for William Nylander and the Leafs are up 2-0 pic.twitter.com/pYUJcIZpVS

Goals allowed on a  5 on 3 are usually immune to my nitpicking, but this was a fundamental mistake. Not by Matt Murray, though he will want this one back, he tried to stay as large as possible in net and a really good shooter picked his spot. The question is, why was Nylander open off of a faceoff?

There is a fight off the puck drop for possession. This is a common thing. 5 players against 3 is not a common thing. Generally in the defensive zone, the winger nearest the boards is responsible for crashing the circle at this time to help win the faceoff. The Penguins don’t have a winger there because they only have three men on the ice. That’s fine, let the Leafs gain possession and play defense. Or…. be Jack Johnson and decide to crash the center dot and try to help win the faceoff. In no situation, 5v5 or otherwise, is the defender responsible to go in and try to win this puck. No coach would ever ask a defender to do this, because this is the result:

By inexplicably crashing the faceoff dot one of the best shooters on the opposing team is wide open. Just look at that image. This is a 5 on 3 and all three Penguins can smell each others breath.

Murray played this about as well as he could have, getting to the top of the paint and standing tall. Nylander put the puck inside that red hexagon int he image. That is an insane shot.

The Penguins were able to recoup for 2 minutes before the defense was again getting completely burned. This time it was a break-out pass setting Kasperi Kapanen in on a breakaway as Jusso Riikola temporarily forgets which side of the ice he is playing.

For those of you who don’t know, this guy has a huge vendetta out against Kris Letang while simultaneously loving Jack Johnson. In fact, had Letang not been on the ice for this goal he wouldn’t have posted it. I know this because the only Maple Leafs goal he didn’t post about was the one where Jack Johnson thought he was a center. Let’s look at the Letang and Riikola positioning on this goal.

That’s Jusso Riikola, well on the other side of his imaginary line that separates the right defender zone from the left. Riikola’s recovery is equally as impressive:

You can see Kris Letang thinking to himself “Jesus christ Dumoulin please come back.” This is the defensive breakdown Sullivan was referring to. Another inexplicable mistake in an NHL game by a team-leading a division. Riikola had no business on this side of the rink, and the team paid the price. Blaming Letang for anything involving this goal is only something I would expect from someone that tweets something like this:

How to Block a Shot

When was Letang’s last blocked shot? Anyone know? pic.twitter.com/qaMnZ15JSB

How to block a shot… by praying the forward shoots it into your leg because you’ve exposed the rest of the goal:

The Penguins defense would heroically not allow another goal in the period. The Leafs finished the period with 22 chances for compared to the penguins 13.

The Leafs took their foot off the gas pedal a bit in the third otherwise this game would’ve likely finished 11-0. Fortunately for Toronto the Penguins were driving a car from the Flinstones in this game and didn’t have a gas pedal to push. Three minutes in the Maple Leafs made it 4-0 after Hyman out willed Justin Schultz on a rebound.

3rd goal for the Leafs tonight off of Faceoffs.
Hyman brought his lunch pale tonight#LeafsForever pic.twitter.com/bDdFvSXENi

Somehow the Penguins wouldn’t allow another goal in the game and it would finish 4-0. Before Toronto fans reconstruct their parade route there are a few things to consider for this game. First and foremost, the Maple Leafs were utterly embarrassed in Pittsburgh Tuesday night and had to come out with their best game. Secondly, every single goal except for the first one was a result of a defensive breakdown. Remove those mental errors and this is a 1-0 game. Thirdly, your team is still only in the playoffs by 2 points and the team chasing you has a game in hand.