Five rational thoughts on the Celtics' weird win vs. the Wolves 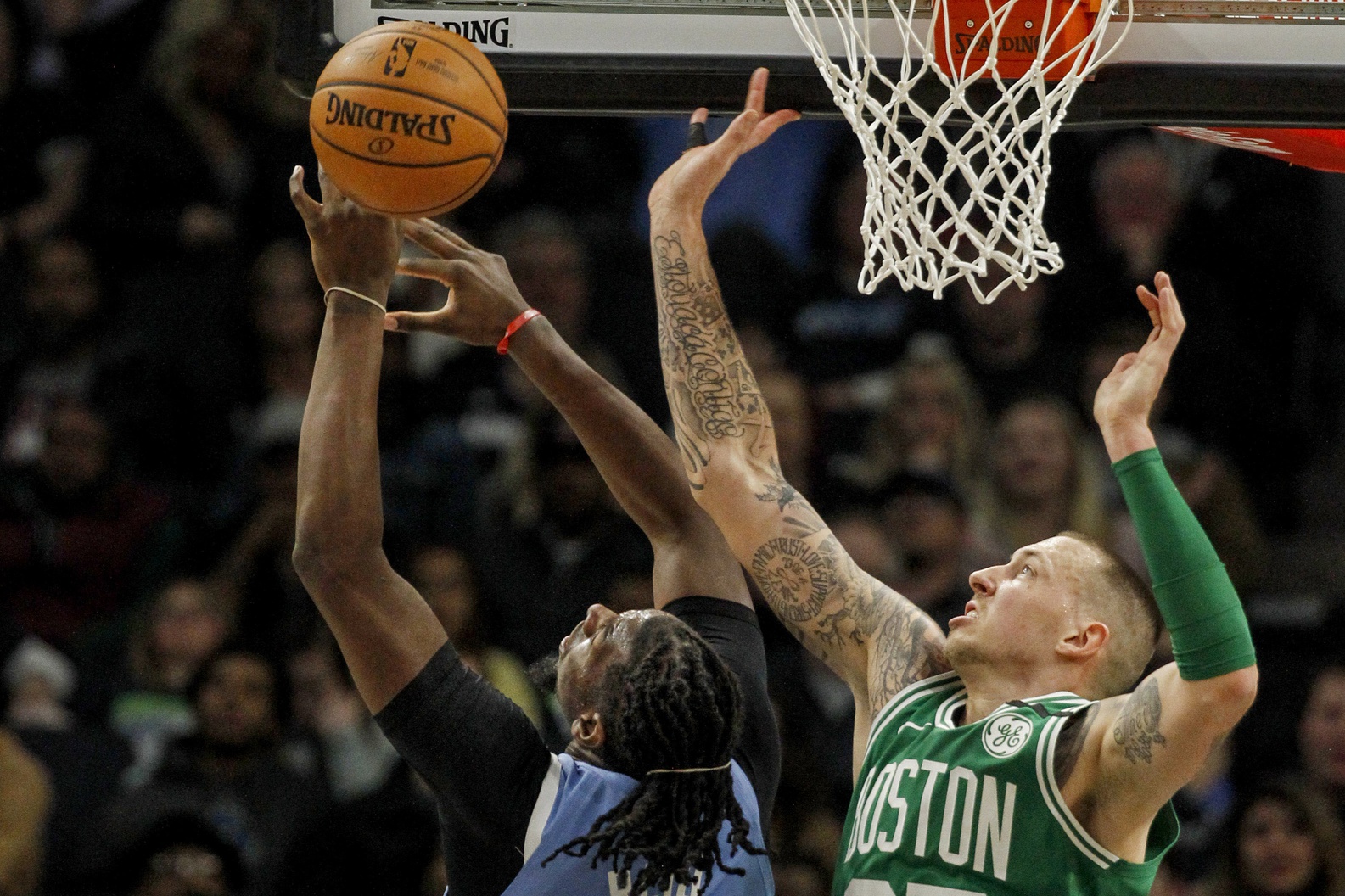 Five rational thoughts on the Celtics' weird win vs. the Wolves

Not every win in the NBA is glamorous, nor even does it necessarily involve playing all that spectacularly. But they do, in fact, all count toward the standings.

The Celtics…looked like they’d just returned from a break, didn’t defend for about 75-80% of the contest and still notched a victory, lucking out somewhat by facing an utterly snakebitten Timberwolves squad. Let’s look at some of its key ingredients:

The War on Theis? More like The Theis War on Everyone.
Say it with me, kids: Daniel Theis is a legit starting center. (Repeat 1,000x.)

Yes, I know this was against a Wolves team with no Karl-Anthony Towns, a reconstructed roster following several trades and the ignominy of losing (prior to last night’s defeat) 15 of their last 16 contests. Yes, Theis’s main opponent down low was Wolves big Naz Reid, in his first start at center, looking unprepared in every possible way an NBA player can look unprepared (albeit while still getting 19 and 9; trust me, we’re gonna get to the Cs defense later). And Reid’s frontcourt fellows, Juancho Hernangomez and the intermittently animate corpse of James Johnson, weren’t going to stop Theis much either.

But there’s only so many caveats you can assign to the German big man’s performance last night before returning to how excellent it really was. Racking up a career-best 25 points and 16 rebounds (6 of them offensive), Theis’s persistent success on offense fueled the Celtics in stretches where the team looked like it might let the Wolves back in the game. He caught truly amazing Marcus Smart passes and dunked them into oblivion. When hit with foul trouble, he adjusted his approach to ensure he’d stay on the floor.

I don’t think scoring at that level is suddenly going to be Theis’s norm, but he’s consistently trended up in that respect this season. Him being even a low double-double threat on a nightly basis ups the ceiling for the Celtics in undeniable fashion.

The gamer owns Minnesota…again
Last season is something Celtics fans—and, probably, a few Celtics players—likely wish to forget for so many reasons. Gordon Hayward is most likely in that camp due to a slow, depressing recovery from his catastrophic 2017 injury that dulled his effectiveness, frustrated his teammates and coaches and drove fans nuts. (Back then, I leaned into the skid regarding Hayward slander on this website and elsewhere, and am happy my dour prediction for his season was wrong.) But even in the 2018-19 doldrums, Hayward went full Call of Duty: Black Ops on expert mode with his shooting in both Cs/T-Wolves matchups, scoring 30 points in the first and 35 in the second (plus four triples in each contest).

Last night the power wing/devoted gamer made it a hat trick, with a 29-5-6-2-0 line on 70.6% shooting. Instead of predicating his assault on longer-range shooting, Hayward excelled in this game by getting in the paint and to the cup or making pick-and-pop jumpers from around the free-throw line. The resurgence of Hayward’s shot cannot be overvalued, particularly his ability to make these sort of tough field goals, which aren’t efficient and usually result from a lack of options—but when you can make those shots consistently, like Gordon can (as can Tatum, Kemba Walker and Jaylen Brown), the inefficiency margin plummets. It’s a hell of a backup plan for the tougher defenses that the playoffs bring.

Who needs defense when you score on (almost) every possession?
That sums up how I feel about the Celtics being defense-optional last night. Bad defense matters against opponents who can score at will. It matters by default in the playoffs, or in key matchups against conference or division rivals and other objectively important games. It matters a lot less in the first game back from a break, on the road, against a team that at certain times this season has looked wracked by profound despair.

If the Celtics are still this lackdaisacal tomorrow afternoon in L.A., that could be indicative of a bigger problem. But for now I’m shrug city about it.

The part about making history…and the low-scoring bench.
This is where I by virtue of contractual obligation as a Celtics writer and fan that, last night, the team had four players score at least 25 points in a single game for the first time since 1960. Awesome! Great!

Well except for the whole “they had to, because the bench couldn’t buy a shot” part, which necessitated a do-everything effort by the starters. Hayward, Tatum, Brown, Theis and Smart (who had a solid 10-3-10-0-1 line despite poor shooting) scored 117 of the Celtics’ 127 total points. That left 10 for the six players on the bench: Brad Wanamaker had 6, Romeo Langford had 2 and Vincent Poirier had 2. That’s it. Not a huge deal in this game, but ideally not something that happens a lot.

The other part about history
Tatum’s performance last night got a bit overshadowed by excitement about Theis. Which I get, because Theis’s line was novel and novelty is exciting. But Jayson Tatum was in many ways the engine of that Celtics’ victory, taking advantage of underqualified opposing wings who couldn’t handle his unique attack. He didn’t shoot well, but made up for it with drives that got him to the stripe—where he went 8 for 8—and put his length to good use bringing down 11 rebounds.

Damn right. That’s what I mean by history.